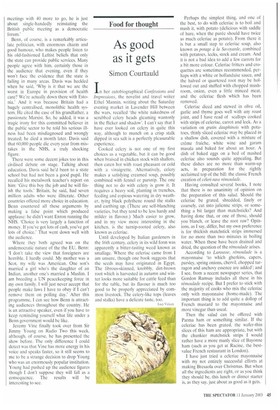 As good as it gets

In her autobiographical Confessions and Impressions, the novelist and travel writer Ethel Mannin, writing about the Saturday evening market in Lavender Hill between the wars, recalled 'the white nakedness of scrubbed celery heads gleaming wantonly in the flicker and shadow'. I can't say that I have ever looked on celery in quite this way, although to munch on a crisp stalk dipped in sea salt is a perfectly pleasurable experience.

Cooked celery is not one of my first choices as a vegetable, but it can be good when braised in chicken stock with shallots, then eaten hot with roast pheasant or cold with a vinaigrette. Alternatively, celery makes a satisfying creamed soup, possibly combined with fennel or parsnip. The one thing not to do with celery is grow it. It requires a heavy soil, planting in trenches, feeding and copious watering in dry weather, tying black polythene round the stalks and earthing up. (There are self-blanching varieties, but they tend to be less hardy and milder in flavour.) Much easier to grow, and in my view more interesting in the kitchen, is the turnip-rooted celery, also known as celeriac.

Until developed by Italian gardeners in the 16th century, celery in its wild form was apparently a hitter-tasting weed known as smallage. Where the celeriac came from I am unsure, though one book suggests that the seeds may have originated in Egypt. The fibrous-skinned, knobbly. dirt-brown root which is harvested in autumn and winter looks more suitable for cattle feed than for the table, but its flavour is much too good to be properly appreciated by common livestock. The celery-like tops (leaves and stalks) have a delicate taste. too.

Perhaps the simplest thing, and one of the best, to do with celeriac is to boil and mash it, with potato (delicious with saddle of hare, when the purée should have twice as much celeriac as potato). From there it is but a small step to celeriac soup, also known as potage a la Savoyarde, combined with potatoes, leeks, stock and cream. And it is not a bad idea to add a few carrots for a bit more colour. Celeriac fritters and croquettes are sometimes recommended, perhaps with a white or hollandaise sauce, and the halved or quartered root may be hollowed out and stuffed with chopped mushroom, onion, even a little minced meat, and the celeriac flesh which has been removed.

Celeriac diced and stewed in olive oil, garlic and thyme goes well with any roast joint, and I have read of scallops cooked with strips of celeriac, carrot and leek. As a variation on gratin dauphinois with potatoes, thinly sliced celeriac may be placed in a shallow dish, covered with a mixture of creme fraiche, white wine and garam masala and baked for about an hour. A dish of baked eggs on a bed of mashed celeriac also sounds quite appealing. But these dishes are no more than warm-up acts, in preparation for the rightly acclaimed top of the bill: the classic French creation of celeri-rave remoulade.

Having consulted several books, I note that there is no unanimity of opinion on the preparation of this salad. Should the celeriac be grated, shredded, finely or coarsely, cut into julienne strips, or something a bit larger than matchsticks? And having done that, or one of those, should you blanch, or leave the root raw? Opinions, as I say, differ, but my own preference is for thickish matchstick strips immersed for no more than two minutes in boiling water. When these have been drained and dried, the question of the remoulade arises.

According to Larousse, remoulade is a mayonnaise `to which gherkins, capers, parsley, spring onions, chervil, chopped tarragon and anchovy essence are added'; and I see, from a recent newspaper series, that Gordon Ramsay includes all these in his remoulade recipe. But I prefer to stick with the majority of cooks who mix the celeriac only with mayonnaise (home-made). The important thing is to add quite a dollop of French mustard to the mayonnaise and more vinegar than usual.

Then the salad can be offered with Parma ham or something similar. If the celeriac has been grated, the wafer-thin slices of this ham are appropriate, but with the chunkier matchstick strips I would rather have a more manly slice of Bayonne ham (such as you get at Racine, the bestvalue French restaurant in London).

I have just tried a celeriac mayonnaise with my not entirely successful efforts at making Bresaola over Christmas. But when all the ingredients are right, or as you think they should be, this lunch or dinner starter is, as they say, just about as good as it gets.