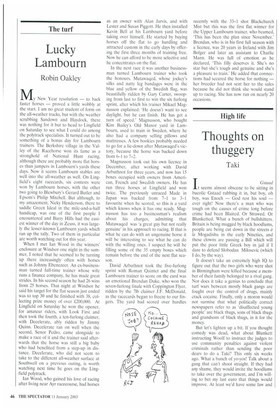 MNew Year resolution — to back faster horses — proved a little wobbly at the start. I am no great student of form on the all-weather tracks, but with the weather scrubbing Sandown and Haydock, there was nothing for it but to head to Lingfield on Saturday to see what I could do among the polytrack specialists. It turned out to be something of a bonus day for Lambourn trainers. The Berkshire village in the Valley of the Racehorse won its fame as a stronghold of National Hunt racing, although there are probably more flat horses than jumpers in Lambourn's yards these days. Now it seems Lambourn stables are well into the all-weather as well. On Lingfield's eight racecards, six contests were won by Lambourn horses, with the other two going to Blewbury's Gerard Butler and Epsom's Philip Mitchell. But although, to my amazement, Nicky Henderson, there to saddle Green Ideal in the mile-and-a-half handicap, was one of the first people I encountered and Barry Hills had the easiest winner of the day in Zeuss, it was largely the lesser-known Lambourn yards which ran up the tally. Two of them in particular are worth watching out for this year.

When I met Ian Wood in the winners' enclosure at Windsor one night in the summer, I noted that he seemed to be turning up there increasingly often with horses such as Johnny Ebenezeer. An ex-businessman turned full-time trainer whose wife runs a finance company, he has made great strides. In his second season he had 26 wins from 25 horses. That night at Windsor he said his target for the flat season just ended was to top 30 and he finished with 38, collecting prize money of over £200,000, At Lingfield on Saturday he won the opener, for amateur riders, with Look First and then took the fourth, a ten-furlong claimer, with Decelerate, ably ridden by Jimmy Quinn. Decelerate ran on well when the second, Senor Pedro, came alongside to make a race of it and the trainer said afterwards that the horse was still a big baby who had benefited from a step-up in distance. Decelerate, who did not seem to take to the different all-weather surface at Southwell on a previous outing, is worth watching next time he goes on the Lingfield polytrack.

Ian Wood, who gained his love of racing after living near Ayr racecourse, had horses as an owner with Alan Jarvis, and with Lester and Susan Piggott. He then installed Kevin Bell at his Lambourn yard before taking over himself. He started by buying horses off the flat to go hurdling and attracted custom in the early days by offering the first three months of training free. Now he can afford to be more selective and he concentrates on the flat.

In the next race it was another businessman turned Lambourn trainer who took the honours. Mutawaged, whose jockey's silks and natty leg bandages were in the blue and yellow of the Swedish flag, was beautifully ridden by Gary Carter, swooping from last to first to win the six furlong sprint, after which his trainer Mikael Magnusson explained: 'He doesn't want to see daylight, but he can finish. He has got a turn of speed.' Magnusson, who bought Kim Bailey's Old Manor yard in Lambourn, used to train in Sweden, where he also had a company selling pillows and mattresses. A few bookies probably needed to go for a lie-down after Mutawaged's victory, because the horse was backed down from 6-1 to 7-2.

Magnusson took out his own licence in December, after working with David Arbuthnot for three years, and now has 15 boxes occupied with owners from American, French and Swedish owners. He has run three horses at Lingfield and won twice. The previously unraced Made in Japan was backed from 7-1 to 3-1 favourite when he scored, so this is a yard which knows when it has one ready. Magnusson has too a businessman's realism about his charges, admitting that Mutawaged was 'a great guy but not really genuine' in his approach to racing. If that is what he can do with an ungenuine horse it will be interesting to see what he can do with the willing ones. I suspect he will be filling some of the 35 empty boxes which remain before the end of the next flat season.

David Arbuthnot took the five-furlong sprint with Roman Quintet and the final Lambourn trainer to score on the card was an emotional Brendan Duke, who won the seven-furlong finale with Coppington Flyer, ridden by the 71b claimer J.F. McDonald, as the racecards began to freeze to our fingers. The yard had scored over hurdles recently with the 33-1 shot Blackchurch Mist but this was the first flat winner for the Upper Lambourn trainer, who beamed, 'This has been the plan since November.' Brendan, who is in his first full season with a licence, was 20 years in Ireland with Jim Bolger and later an assistant to Charlie Mann. He was full of emotion as he declared, 'This filly deserves it. She's no star but she's tough and genuine and she's a pleasure to train.' He added that connections had secured the horse for nothing — her breeder had not sent her to the sales because he did not think she would stand up to racing. She has now run on nearly 20 occasions.