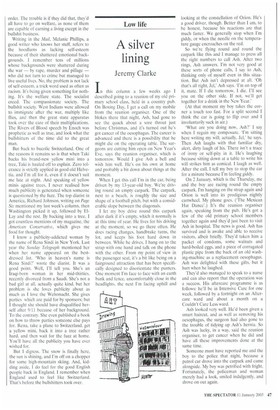 In this column a few weeks ago I described going to a reunion of my old primary school class, held in a country pub. On Boxing Day, I get a call on my mobile from the reunion organiser. One of the blokes there that night, Ash, had gone to see the quack about a sore throat just before Christmas, and it's turned out he's got cancer of the oesophagus. The cancer is advanced and there is a possibility that he might die on the operating table. The surgeons are cutting him open on New Year's Eve, says the reunion organiser, which is tomorrow. Would I give Ash a bell and wish him well. He's on his own at home and probably a bit down about things at the moment.

When I get this call I'm in the car, being driven by my 13-year-old boy. We're driving round an empty carpark. The carpark, next to a beach, is roughly the size and shape of a football pitch, but with a considerable slope between the diagonals.

I let my boy drive round this carpark after dark if it's empty, which it normally is at this time of year. He lives for his driving at the moment, so we go there often. He does racing changes, handbrake turns, the lot, and keeps his foot hard down in between. While he drives, I hang on to the strap with one hand and talk on the phone with the other. From my point of view in the passenger seat, it's a bit like being on a fairground attraction that has been specifically designed to disorientate the punters. One moment I'm face to face with an earth bank and fence, uncomfortably close in the headlights, the next I'm facing uphill and looking at the constellation of Orion. He's a good driver, though. Better than I am, to be honest, because his reactions are that much faster. We generally stop when I'm giddy, or when the needle on the temperature gauge encroaches on the red.

So we're flying round and round the carpark like this and I manage to press all the right numbers to call Ash. After two rings, Ash answers. I'm not very good at these sorts of phone calls, I say to Ash, thinking only of myself even in this situa tion. But Ash isn't depressed at all. 'Oh that's all right, Jel,' Ash says. 'I'm on top of it, mate. If I die tomorrow. I die. I'll see you on the other side. If not, we'll get together for a drink in the New Year.'

(At that moment my boy takes the corner a touch too fast. For a split second I think the car is going to flip over and I involuntarily suck in air.) 'What are you doing now, Ash?' I say when I regain my composure. 'I'm sitting

Then Ash laughs with that familiar dry, alert, dirty laugh of his. There isn't a trace of irony or self-pity in it. He's laughing because sitting down at a table to write his will strikes him as comical. I laugh as well. After the call, I tell my boy to stop the car for a minute because I'm feeling giddy.

On 2 January, which is the Thursday, me and the boy are racing round the empty carpark. I'm hanging on the strap again and Orion is well into its prodigious nightly cartwheel. My phone goes. (The Mexican Hat Dance...) It's the reunion organiser again, speaking from the pub. He's got a few of the old primary school members together again and they'd just been to visit Ash in hospital. The news is good. Ash has survived and is awake and able to receive visitors, albeit briefly. They'd taken him a packet of condoms, some walnuts and hard-boiled eggs, and a piece of corrugated plastic pipe from the back of an old washing-machine as a replacement oesophagus. Ash was delighted with these gifts, but it hurt when he laughed.

They'd also managed to speak to a nurse and can also report that the operation was a success. His aftercare programme is as follows: he'll be in Intensive Care for one week, followed by a fortnight on an Aftercare ward and about a month on a Couldn't Care Less ward.

Ash looked very well. He'd been given a smart haircut, and as well as removing his oesophagus, the surgeon had also gone to the trouble of tidying up Ash's hernia. So Ash was lucky, in a way, said the reunion organiser, to get cancer when he did and have all these improvements done at the same time.

Someone must have reported me and the boy to the police that night, because a patrol car drove into the carpark and came alongside. My boy was petrified with fright. Fortunately, the policeman and woman merely had a look, smiled indulgently, and drove on out again.