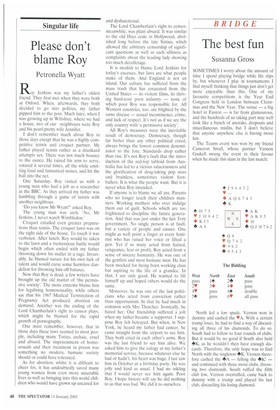 Roy Jenkins was my father's oldest friend. They first met when they were both at Oxford. When, afterwards, they both decided to go into politics, my father pipped him to the post. Much later, when I was growing up in Wiltshire, where we had a house, two of our neighbours were Roy and his pearl-pretty wife Jennifer.

I don't remember much about Roy in those days except that he was a highly competitive tennis and croquet partner. My father played tennis rather as a drunkard attempts sex. There was not much bounce to the ounce. He raised his arm to serve, rotated it several times, all the while emitting loud and fantastical noises, and hit the ball into the net.

One Saturday, Roy visited us with a young man who had a job as a researcher at the BBC. As they arrived my father was fumbling through a game of tennis with another neighbour.

'Do you know Mr Wyatt?' asked Roy. The young man was arch. 'No, Mr Jenkins. I never watch Wimbledon.'

Croquet entailed even greater preparations than tennis. The croquet lawn was on the right side of the house. To touch it was verboten. After lunch, Roy would be taken to the lawn and a tremendous battle would begin which often ended with my father throwing down his mallet in a rage. Invariably, he blamed nature for his own lack of talent and would curse some harmless dandelion for throwing him off balance.

Now that Roy is dead, a few writers have brought up the old matter of 'the permissive society'. The more extreme blame him for legalising homosexuality, while others say that his 1967 Medical Termination of Pregnancy Act produced abortion on demand. Another was the ending of the Lord Chamberlain's right to censor plays. which might be blamed for the rapid growth of pornography.

One must remember, however, that in those days these laws seemed to most people, including many Tories, archaic, cruel and absurd. The imprisonment of homosexuals and their treatment in prison was something no modern, humane society should or could have tolerated.

As for abortion, whilst it is difficult to cheer for, it has undoubtedly saved many young women from even more miserable lives as well as bringing into this world children who would have grown up uncared for and dysfunctional.

The Lord Chamberlain's right to censor, meanwhile, was plain absurd. It was similar to the old Hays code in Hollywood, abolished long before the late Sixties, which allowed the arbitrary censorship of significant questions as well as such silliness as complaints about the leading lady showing too much décolletage.

All Roy's measures were the inevitable result of democracy. Democracy, though far better than any other political creed, always brings the lowest common denominator to the fore. Standards drop rather than rise. It's not Roy's fault that the introduction of the red-top tabloid from Australia has led to a vicious salaciousness and the glorification of drug-taking pop stars and brainless, sometimes violent footballers. It is what the people want. But it is never what Roy intended.

If anyone is to blame we all are. Parents who no longer teach their children manners. Working mothers who over indulge them out of guilt. Schools which are too frightened to discipline the future generation. And that was just under the last Tory government. No single person is at fault, but a variety of people and causes. One might as well point a finger at every feminist who has raised her voice or lifted a pen. Yet if so many acted from hatred, vengeance, fear or profit, Roy acted from a sense of sincere humanity. He was one of the gentlest and most humane men. He has been mocked for being born working class but aspiring to the life of a grandee. In that, I see only good. He wanted to lift himself up and hoped others would do the same.

Moreover, he was one of the last politicians who acted from conviction rather than opportunism. In that he had much in common with Mrs Thatcher. Ironically, he hated her. Our friendship suffered a jolt when my father became a supporter. I suppose Roy felt betrayed. But when, in New York, he heard my father had cancer, he came straight from the airport to see him. They both cried in each other's arms. Roy was the last friend to see him alive. We asked him to give the eulogy at my father's memorial service, because whatever else he had or hadn't, his heart was huge. I last saw him in October at a birthday party. He was jolly and kind as usual. I had no inkling that I would never see him again. Poor Roy. I hope history will say he did nothing to us that was bad. We did it to ourselves.