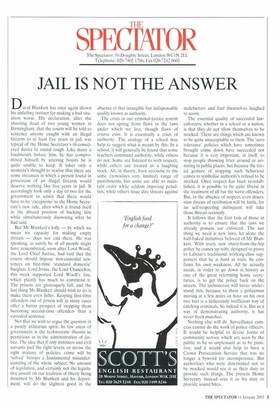 JAIL IS NOT THE ANSWER

David Blunkett has once again shown his unfailing instinct for making a bad situation worse, His declaration, after the shooting dead of two young women in Birmingham, that the courts will be told to sentence anyone caught with an illegal firearm to at least five years in jail, was typical of the Home Secretary's ill-considered desire to sound tough. Like many a loudmouth before him, he has compromised himself by uttering boasts he is quite unable to keep. It takes only a moment's thought to realise that there are some instances in which a person found in possession of an illegal firearm would deserve nothing like five years in jail. It accordingly took only a day or two for the government to admit that there would have to be 'exceptions' to the Home Secretary's new rule, after which it found itself in the absurd position of backing him while simultaneously disowning what he had said.

But Mr Blunkett's folly — by which we mean his capacity for making empty threats — does not end there. He was speaking, as surely he of all people might have remembered, soon after Lord Woolf, the Lord Chief Justice, had said that the courts should impose non-custodial sentences on first-time 'standard domestic' burglars. Lord Irvine. the Lord Chancellor, this week supported Lord Woolf's line, which plainly has much to commend it. The prisons are grotesquely full, and the last thing Mr Blunkett should wish to do is make them even fuller. Keeping first-time offenders out of prison will in many cases offer a better prospect of stopping them becoming second-time offenders than a custodial sentence.

Not that we wish to argue the question in a purely utilitarian spirit. In few areas of government is the technocratic illusion so pernicious as in the administration of justice. The idea that if only ministers and civil servants pull the right levers, or devise the right mixture of policies, crime will be 'solved' betrays a fundamental misunderstanding of the whole subject. No amount of legislation, and certainly not the legislative assault on our tradition of liberty being mounted by Mr Blunkett and his department, will do the slightest good in the absence of that intangible but indispensable quality known as authority.

The crisis in our criminal-justice system does not spring from flaws in the laws under which we live, though flaws of course exist. It is essentially a crisis of authority. The analogy of a school may help to suggest what is meant by this. In a school, it will generally be found that some teachers command authority, while others do not. Some are listened to with respect, while others are treated as a laughing stock. All, in theory, have recourse to the same (nowadays very limited) range of punishments, but some are able to maintain order while seldom imposing penalties, while others issue dire threats against malefactors and find themselves laughed to scorn.

The essential quality of successful lawenforcers, whether in a school or a nation, is that they do not allow themselves to be mocked. There are things which are known to be quite unacceptable to them. The 'zero tolerance' policies which have sometimes brought crime down have succeeded not because it is very important, in itself, to stop people throwing litter around or urinating in public places, but because the trivial gesture of stopping such behaviour comes to symbolise authority's refusal to be mocked. Once respect has been re-established, it is possible to be quite liberal in the treatment of all but the worst offenders. But, in the absence of respect, even draconian threats of retribution will be futile, for no self-respecting delinquent will take those threats seriously.

It follows that the first task of those in authority is to ensure that the laws we already possess are enforced. The last thing we need is new laws, let alone the half-baked initiatives beloved of Mr Blunkett. With every new shoot-from-the-hip policy he comes up with, designed to prove to Labour's traditional working-class supporters that he is hard as nails, he confirms his own weakness. All he actually needs, in order to go down in history as one of the great reforming home secretaries, is to get the police back on the streets. The technocrats will never understand this, because to them a policeman moving at a few miles an hour on his own two feet is a ludicrously inefficient way of catching criminals. So indeed it is. But as a way of demonstrating authority, it has never been matched.

Nothing else will do. Surveillance cameras cannot do the work of police officers. It would be helpful to devise forms of community service which are seen by the public to be so unpleasant as to be punitive; and it would also help to have a Crown Prosecution Service that was no longer a byword for incompetence. But authorities who were determined not to be mocked would see it as their duty to provide such things. The present Home Secretary instead sees it as his duty to provide sound bites.