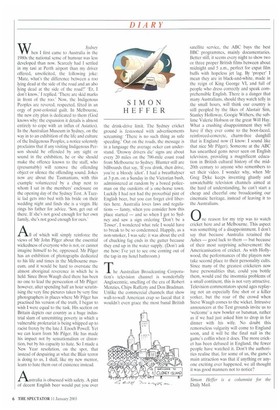 WSydney hen I first came to Australia in the 1980s the national sense of humour was less developed than now. Scarcely had I settled in my taxi at Perth airport than my driver offered, unsolicited, the following joke: 'Mate, what's the difference between a roo lying dead at the side of the road and an abo lying dead at the side of the road?"Er, I don't know,' I replied. There are skid marks in front of the roo.' Now, the Indigenous Peoples are revered, respected, feted in an orgy of post-colonial guilt. In Melbourne, the new city plan is dedicated to them (God knows why: the expansion it details is almost entirely to cope with an influx of Asiatics). In the Australian Museum in Sydney, on the way in to an exhibition of the life and culture of the Indigenous Peoples, a notice solemnly proclaims that if any visiting Indigenous Person should be offended by any sight or sound in the exhibition, he or she should make the offence known to the staff, who (presumably) will remove the offending object or silence the offending sound. Jokes now are about the Tasmanians, with this example volunteered by a chap next to whom I sat in the members' enclosure on the opening day of the Sydney Test. A Tazzie lad gets into bed with his bride on their wedding night and finds she is a virgin. He rings his father for advice. 'Son, get out of there. If she's not good enough for her own family, she's not good enough for ours.'

All of which will simply reinforce the views of Mr John Pilger about the essential wickedness of everyone who is not, or cannot imagine himself to be, oppressed. Mr Pilger has an exhibition of photographs dedicated to his life and times in the Melbourne museum, and it would be hard to overstate the almost aboriginal reverence in which he is held. Since Bron Waugh died there has been no one to lead the persecution of Mr Pilger: however, after spending half an hour scrutinising the very fine pictures taken by very fine photographers in places where Mr Pilger has practised his version of the truth, I began to wish I were equal to the task. His section on Britain depicts our country as a huge industrial slum of unremitting poverty in which a vulnerable proletariat is being whipped up to racist frenzy by the late J. Enoch Powell. Yet we can learn from Mr Pilger. He has made his impact not by sensationalism or distortion, but by his capacity to hate. So I made a New Year resolution, on the spot, that instead of despairing at what the Blair terror is doing to us, I shall, like my new mentor, learn to hate them out of existence instead.

Australia is obsessed with safety. A pint of decent English beer would put you over

the drink-drive limit. The Sydney cricket ground is festooned with advertisements screaming: 'There is no such thing as safe speeding.' Out on the roads, the message is in a language the average ocker can understand. 'Drowsy drivers die' signs are about every 20 miles on the 700-mile coast road from Melbourne to Sydney. Blunter still are billboards that say, 'If you drink, then drive, you're a bloody idiot'. I had a breathalyser at 3 p.m. on a Sunday in the Victorian bush, administered at random by a bored policeman on the outskirts of a one-horse town. Luckily I had not had the proverbial pint of English beer, but you can forget civil liberties here. Australia loves laws and regulations — funny, when you consider how this place started — and so when I got to Sydney and saw a sign ordering 'Don't be a Tosser'. I wondered what rule I would have to break to be so condemned. Happily, as a non-smoker, I was safe: it was about the evil of chucking fag ends in the gutter because they end up in the water supply. (Don't ask me how: I've yet to see one coming out of the tap in my hotel bathroom.)

The Australian Broadcasting Corporation's television channel is wonderfully Anglocentric, smelling of the era of Robert Menzies, Chips Rafferty and Don Bradman. Unlike the commercial channels that show wall-to-wall American crap so faecal that it wouldn't even grace the most banal British satellite service, the ABC buys the best BBC programmes, mainly documentaries. Better still, it seems every night to show two or three proper British films between about midnight and 5 a.m., perfect for expat film buffs with hopeless jet lag, By 'proper' I mean they are in black-and-white, made in the reign of King George VI, and full of people who dress correctly and speak comprehensible English. There is a danger that many Australians, should they watch telly in the small hours, will think our country is still peopled by the likes of Alastair Sim, Stanley Holloway, Googie Withers, the sublime Valerie Hobson or the great Will Hay. What a crushing disappointment they will have if they ever come to the boot-faced, reinforced-concrete, charm-free dunghill that is England now (I know: I sound like that nice Mr Pilger). Someone at the ABC has unearthed gems never seen on English television, providing a magnificent education in British cultural history of the mid20th century to anyone who remembers to set their video. I wonder why, when Mr Greg Dyke keeps inventing ghastly and unwatchable television channels aimed at the hard of understanding, he can't start a cheap and cheerful one broadcasting our cinematic heritage, instead of leaving it to the Australians.

One reason for my trip was to watch cricket here and at Melbourne. This aspect was something of a disappointment. I don't say that because Australia retained the Ashes — good luck to them — but because of their most surprising achievement: the Americanisation of cricket. As with Hollywood, the performances of the players now take second place to their personality cults. Since many of the greatest cricketers now have personalities that, could you bottle them, would end the insomnia problems of a small continent, this is not very attractive. Television commentators spend ages replaying not an especially fine shot or a killer yorker, but the roar of the crowd when Steve Waugh comes to the wicket. Intrusive announcers at the Test grounds invite us to 'welcome' a new bowler or batsman, rather as if we had just asked him to drop in for dinner with his wife. No doubt this remorseless vulgarity will come to England soon, and it will be the final nail in the game's coffin when it does. The more cricket has been debased in England, the fewer people have watched it. Don't the authorities realise that, for some of us, the game's main attraction was that if anything or anyone exciting ever happened, we all thought it was good manners not to notice?

Simon Heifer is a columnist for the Daily Mail.