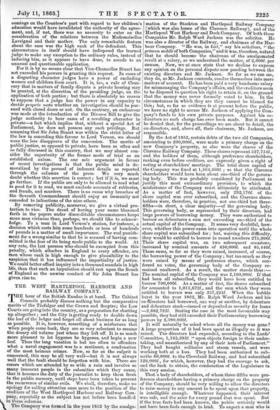 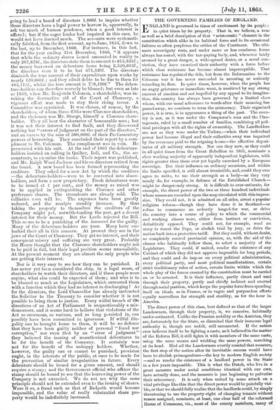 THE hour of the British Exodus is at hand. The Cabinet Councils probably discuss nothing but the comparative merits of the Trafalgar and the Crown and Sceptre; the Law Courts are going into the country, as a preparation for shutting up altogether ; and the City is getting ready to double down the leaf of the ledger and forget all about business for as long as possible. It is, however, something of a misfortune that when people come back, they are so very reluctant to resume the dreary old volume just where they left oft'. It is so much more pleasant to let bygones be bygones, and begin a new leaf. Thus the long vacation is but too often to offenders what a naval engagement was to a mutineer, a condonation of the most heinous crimes. Now, so far as the culprit is concerned, this may be all very well—but it is not always well that the fault should be forgotten with him. There are errors which are attended by so wide a ruin and involve so many innocent people in the calamities which they cause, that it becomes the duty of the journalist to keep them fresh in the public memory, until steps have been taken to prevent the recurrence of similar evils. We shall, therefore, make no apology for calling attention once more to the position of the creditors of the West Hartlepool Harbour and Railway Com- pany, especially as the subject has not before been handled in these columns.

The Company was formed in the year 1852 by the amalga- mation of the Stockton and Hartlepool Railway Company (which was also lessee of the Clarence Railway), and of the Hartlepool West Harbour and Dock Company. Of both these Companies Mr. Ralph Ward Jackson was the solicitor. He was also a director of the Railway, and chairman of the Har- bour Company. "He was, in fact," say his solicitors, "the primum mobile of both Companies," and it was, therefore, natural that he should become the chairman of the amalgamated result at a salary, as we understand the matter, of 2,0001. per annum. Now, we at once state that we decline to express any opinion on the personal dispute now pending between the existing directors and Mr. Jackson. So far as we can see, they do, as Mr. Jackson contends, resolve themselves into mere matters of account. He has been paid a very handsome salary for mismanaging the Company's affairs, and the creditors seem to be disposed to question his right to retain it, on the ground that the money was never formally voted to him. In the circumstances in which they are they cannot be blamed for this ; but, so far as evidence is at present before the public, we have no right to accuse Mr. Jackson of applying the Com- pany's funds to his own private purposes. Against his co- directors no such charge has ever been made. But it cannot be denied that, for the proceedings we are about to detail, the ex-directors, and, above all, their chairman, Mr. Jackson, arc responsible.

By the Act of 1852, certain debts of the two old Companies, amounting to 200,0001., were made a primary charge on the new Company's property, as also were the shares of the Clarence Railway Company. These shares represent 527,754/., and the holders of them, although preference shareholders, ranking even before creditors, are expressly given a right of voting at shareholders' meetings. The total share capital of the Company was fixed at 1,564,5601.; so that the Clarence shareholders would have been about one-third of the govern- ing body. This was probably considered by Parliament to justify this most extraordinary provision, to which the misfortunes of the Company must ultimately be attributed. As a matter of fact, however, only 292,170/. of the share capital was ever subscribed, and the Clarence share- holders were, therefore, in practice, not one-third but three- fifths—in short, a clear majority—of the governing body. This governing body, as represented by their directors, had large powers of borrowing money. They were authorized to borrow on debentures a sum not exceeding one-third of the actual capital of the Company. It seems very doubtful, how- ever, whether this power came into operation until the whole share capital was subscribed for ; but, waiving this difficulty, they would be entitled to borrow in round numbers 275,000/. Their share capital was, on two subsequent =Wong increased by nominal amounts of 450,000/. and 85,4401. Those sums, so far as they were raised, increased, of course, the borrowing power of the Company ; but inasmuch as they were raised by means of preference shares, which con- ferred no votes, the governing body of the Company re- mained unaltered. As a result, the matter stands thus :— The nominal capital of the Company was 2,100,000/. If that had been all subscribed, they would have been entitled to borrow 700,000/. As a matter of fact, the shares subscribed for amounted to 1,011,672/., and the sum which they were entitled to borrow was only 337,224/. When the bubble burst in the year 1862, Mr. Ralph Ward Jackson and his co-tlirectors had borrowed, one way or another, by debenture and debenture stock—issued or deposited as security for loans —2,882,7221. Stating the case in the most favourable way possible, they had still exceeded their Parliamentary borrowing powers by 2,380,000/. It will naturally be asked where all the money was gone ? A large proportion of it had been spent as illegally as it was raised. The directors had expended, according to the Lords' Committee, 1,163,393/. "upon objects foreign to their under- taking, and unauthorized by any of their Acts of Parliament."

They had bought collieries and steam vessels, and were working both at a loss. They had been authorized to sub- scribe 60,0001. to the Cleveland Railway, and had subscribed 120,000/., for which, however, they had the courage to ask, and the luck to obtain, the condonation of the Legislature in this very session.

That a body of shareholders, of whom three-fifths were pre- ference shareholders having a primary charge on the property of the Company, should be very willing to allow the directors to raise money to any amount to be spent upon that property, is intelligible enough. Whatever happened, their interest was safe, and the seer for every pound that was spent. But if the true facts had been known, the public certainly would not have been fools enough to lend. To expect a man who is going to lend a board of directors 1,000/. to inquire whether those directors have a legal power to borrow is, apparently, to ask too much of human prudence, when a good interest is offered ; but if the eager lender had inquired in this ease, he would not have learned much. The accounts were systemati- cally falsified, from the first account, up to June, 1853, down to the last, up to December, 1860. For instance, in this last, that for the year ending 31st December, 1860, "it appears that while the ordinary shares issued amounted in reality to only 287,878/., the directors state them to amount to 815,8531.; the money borrowed on debenture loans being 2,520,0131., the directors state it to be but 671,5201. The directors diminish the true amount of their expenditure upon works by nearly 130,0001.; and they admit debts to be due to them for 485,115/., whilst the true amount is 778,1901." The deben- ture-holders can therefore scarcely be blamed; but even as late as 1859, when Mr. Benjamin Coleman, a shareholder, was in- voking the destructive aid of the Court. of Chancery, a vigorous effort was made to stay their rising terror. A Committee was appointed. It was chosen, of course, by the shareholders, of whom three-fifths were Clarence shareholders, and the chairman was Mr. Sturge, himself a Clarence share- holder. They all bear the character of honourable men ; but it was not their interest to find fault, and they discovered nothing but "errors of judgment on the part of the directors," and an excess by the sum of 500,000/. of their Parliamentary powers of borrowing. They concluded their report by a com- pliment to Mr. Coleman. The compliment was in vain. He persevered with his suit. At the end of 1861 the debenture- holders insisted on calling in Quilter, Ball, and Co., the ac- countants, to examine the books. Their report was published, and Mr. Ralph Ward Jackson and his co-directors retired from the board. A new board has been formed representing the creditors. They asked for a new Act by which the creditors —the debenture-holders—were to be converted into share- holders, and form a new proprietary. Fresh debentures were to be issued at 4 per cent., and the money so raised was to be applied in extinguishing the Clarence and other preference shares. The steamboats are already sold. The collieries son will be. The expenses have been greatly reduced, and the receipts steadily increase. By thus taking the property to themselves the creditors of the Company might yet, notwithstanding the past, get a decent interest for their money. But the Lords rejected the Bill. This seems to be a punishing of the innocent for the guilty. Many of the debenture-holders are poor. Many have em- barked their all in this concern. At present they are in the jaws of the Court of Chancery. They get no interest, and their consequent misery and suffering are very great. Probably the House thought that the Clarence shareholders ought not to be paid in full, but their legal position seems unassailable. At the present moment they are almost the only people who are getting their interest.

Nor is it very easy to see how they can be punished. It has never yet bear considered the duty, in a legal sense, of shareholders to watch their directors, and if these people were supine, what else could be expected of them; and who is to be blamed so much as the Legislature, which entrusted them with a function which they had no interest in discharging ? As for the directors, the Lord Chancellor has already instructed the Solicitor to the Treasury to consider whether it is not possible to bring them to justice. Every wilful breach of the directions of an Act of Parliament is unquestionably a mis- demeanour, and it seems hard to believe that violations of the Act so enormous, so various, and so long persisted in, can possibly have been committed in ignorance. If wilful ille- gality can be brought home to them, it will be no defence that they have been guilty neither of personal "fraud nor corruption," nor even that by an "error of judgment" they believed the issuing of unauthorized debentures to be for the benefit of the Company. It certainly was not for the benefit of the unhappy holders. Whether, however, the guilty can or cannot be punished, provision ought, in the interests of the public, at once to be made for the prevention of similar irregularities in future. Every debenture should be issued for a given amount, and should require a stamp ; and the Government official who affixes the stamp should be bound to see that the borrowing power of the Company is not exceeded. We do not see why the same principle should not be extended even to the issuing of shares. Were it so, a fraud such as that of Redpath would become impossible, and the value of really substantial share pro- perty would be indefinitely increased.