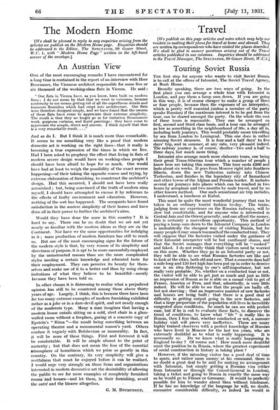 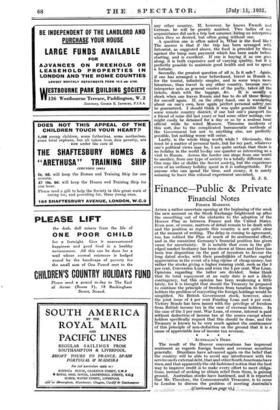 [We publish on this page articles and notes which may help our readers in making their plans for travel at home and abroad. They are written by correspondents who have visited the places described. We shall be glad to answer questions arising out of the Travel articles published in our columns. Inquiries should be addressed to the Travel Manager, The SPECTATOR, 99 Gower Street, W .C.1.1

THE first step for anyone who wants to visit Soviet Russia is to call at the offices of Intourist, The Soviet Travel Agency, at Bush House.

- Broadly speaking, there are two ways of going. In the first place you can arrange a whole tour with Intourist in London, and pay them a lump sum down. If you are ,going in this way, it is of course cheaper to make a group of three or four people, because then the expenses of an interprder, which is pretty well essential -(unless a memlaer- of the party speaks Russian) if the maximum interest is to be got from the tour, can be shared amongst the party. On the whole the cost of these tours is reasonable. They can be arranged on first, second and third class basis, and a tour can be arranged as low as something in the neighbourhood of 30s. a day all in, including both journeys. This would probably mean travelling by sea from London to Leningrad.- This one does in rather amusing Soviet steamers. It is fourand a half days' to five days' trip, and in summer, at any rate, very pleasant indeed. The railway jouraey is, of course,- shorter—two and a half to

three days, but much more tiring. - - Intourist also arrange much more elaborate tours, one being their great Trans-Siberian tour which a number of people I know here are taking this summer. This tour costs £200 and lasts about six weeks. It goes from Moscow right into Southern Siberia, down the new Turkestan railway into Chinese Turkestan, and finishes in the legendary city of Samarkand and other towns of the Afghan and Persian border. It includes several air journeys into places which can be reached in two hours by aeroplane and two months by mule travel, and by no other known method. One such sensational air trip includes, I understand, a luncheon at Kabul.

This must be quite the most wonderful journey that can be taken in an ordinary tourist fashion to-day. The trains, judging from my experience on the Russian railways, will be slow, but comfortable, and for anyone -who is interested in Central Asia and the Orient generally, and can afford the money, this is certainly a marvellous opportunity. This method of paying a lump sum down to the Intourist Company in London is undoubtedly the cheapest way of visiting Russia, but for many people it may smack too much of the conducted tour. They will suppose that the factories visited under the guidance of their Intourist interpreter will be but cardboard shams, and that the Soviet manages that everything will be " cooked " and faked. I do not really think that visitors need be worried on this score. Whether they go in an Intourist party or not, they will be able to see what Russian factories are hie and to look at the cities, both old and new. That a concrete dam half a mile long and 150 feet high has been put up in order to deceive one is an idea flattering to one's self-importance, but not really very probable. No, whether-on a conducted tour or not, the visitor will be able to get just as much and just as little an impression of Russia as he is able on a casual visit to get of France, America or Peru, and-that, admittedly, is very little indeed. He will be able to see that the people are badly off, but not starving ; that an impressive number of new factories and leases are being 'built ; that there is a good deal of difficulty in getting output going in the new factories, and that a large proportion of the population still lives in incredibly congested slum conditions. So- much he can see with perfect ease, but if he is out to evaluate these facts, to discover the trend of conditions, to know what " life " is really like in Russia, then I fear that, whether conducted or not, a summer holiday visit will prove very ineffective. There are many highly trained observers with a perfect knowledge of Russian who have lived in Moscow for the last ten years, who are extremely doubtful as to what is really happening. It is necessarily so. Do we know what is really happening in England to-day ? Of course not ! How much more doubtful must the position be in Russia, where the greatest experiment of social construction in history is taking place ?

However, if the intending visitor has a good deal of time to spare, and rather more money at his command, there is no doubt a great deal to be said for making no arrangement with Intourist, but simply getting a Russian visa (either from Intourist or through the Consul-General in London), taking a ticket and going to Russia in exactly the same way as he would go to France or Germany. It would be.perfectly possible for him to wander about then without hindrance. If he has" no knowledge of the language he will, no doubt, _encounter considerable difficulty, as indeed he would in

any other country. If, however, he knows French and German, he will be greatly assisted. Two ladies of my acquaintance did such a trip last summer, hiring an interpreter when they so desired, but often going without one.

A question one is often asked is, What is the food like? The answer is that if the trip has been arranged With Intourist, as suggested above, the food is provided by theni against the lump sum payment which has been made before starting, and is excellent. If one is buying it as one goes along, it is both expensive and of varying quality, but it is perfectly possible to maintain good health and not to spend a fortune.

Secondly, the greatest question of all is, Is it safe? Again, if one has arranged a tour beforehand, travel in Russia is, for the tourist, infinitely simpler, and in some ways more luxurious, than travel in any other country, because one's interpreter acts as general courier of the party, talkes all the

tickets, deals with the luggage, &c. It is usually a shock when one leaves Russia and has to do all these things for oneself again. If, on the other hand, one is wandering about on one's own, here again ,*perfect personal safety, can be guaranteed. I should think it was quite possible that in some remote country district; if one lost one's passport (as a friend of mine did last year) or had some other mishap, one might easily be detained for a day or so by a zealous local official while he wired Moscow. Tiresome incidents of this sort, due to the complicated bureaucratic methods of the Government but not to anything else, are perfectly possible, but nothing worse will occur. Lastly, is the -whole thing worth while ? Obviously, this must be a matter of personal taste,' but for my part, whatever one's political views may be, I am quite certain that there is no holiday in the world to-day one quarter as interesting as a visit to Russia. Across the border one steps from one world to another, from one type of society to a totally different one. One may like or dislike the Soviet society, but the experience even of an ordinary holiday spent in it is unforgettable. For anyone who can spend the time, and money, it is surely amazing to leave this colossal experiment unvisited.