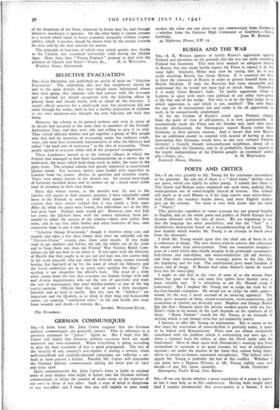 am very grateful to Mr. Young for his courteous restatement of his question. He asks me if there is a "third form," neither verse nor prose, which can rightly be called poetry. I submit that there is. The Greek and Roman poets employed one such form, making their word-patterns out of vowel-lengths instead of stresses. Om schools still teach us to read Homer as if his long vowels were stress-beats: with Pindar the mockery breaks down, and most English readers give up the attempt. Yet there is very little doubt that his work is "Poetry."

This particular expedient of vowel scansion has not proved feasible in English, and on the whole poets and publics of North Europe have become obsessed with the idea of stress. We are beginning to see that the language has other possibilities, and that the " foot " is a mischievous abstraction based on a misunderstanding of Latin. The new manner which worries Mr. Young is an attempt to break away from the obsession.

I think Mr. Young would agree that the chief aim of form in art is coherence of image. The new writers want to achieve that coherence by means other than stress-pattern. They use associative imagery— puns of a kind which they fondly imagine to be profound—assonances, half-rhyme and end-rhyme, and word-similarities (all old devices), and keep their stress-patterns for strategic points in the line, like the beginning and the end. The combination gives more freedom of music and of image. If Binyon had taken Moore's metre he would have lost his vowel-play.

I ought to add that in the view of most of us the retreat from metre has gone too far, and some free spirits have thrown away a most valuable tool. It is refreshing to see Mr. Hassan using it judiciously. But I implore Mr. Young not to judge the style by its heaviest-handed exponents. He would not so judge the older poets-- whom, by the way, I never accused of an unseeing approach. The three great weapons of form, sound-association, stress-association, and association of symbol, are diversely used. Hopkins and George Barker like the first ; Empson plays his private snooker-games with the last. Eliot's claim to be master of the craft depends on his synthesis of all three. "Burnt Norton" stands for Mr. Young as an example of writing which is not formal verse but pre-eminently poetry.

I hesitate to offer Mr. Young an explanation. But it seems to me that since the association of stress-rhythm is probably erotic, it tends to be linked with Romanticism. Poets now are almost exclusively concerned with the problem which is overturning our own age: is there a rational basis for ethics, or does the Devil really take the hind-most? Most of them agree with Dostoevsky's warning that from rationalism to satanism is no great journey, by way of enlightened egotism ; vet under the shadow of the times they cannot bring them- selves to return to honest, emotional metaphysics. The hybrid which appals Mr. Young is probably the foal of this conflict. Whether it can grow into a Pegasus History, as Mr. Young rightly says, will