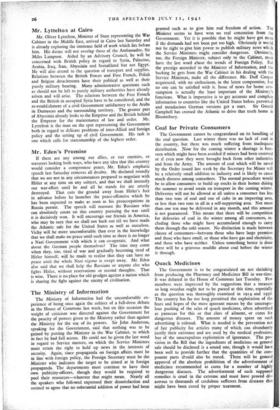 If there are any among our allies, or our enemies, or waverers looking both ways, who have any idea that this country would consider a compromise peace, Mr. Eden's emphatic speech last Saturday removes all doubts. He declared roundly that we are not in any circumstances prepared to negotiate with Hitler at any time on any subject, and that we shall intensify our war-effort until he and all he stands for are utterly destroyed. That cuts the ground away from Hitler's feet in advance before he launches the peace-offensive which he has been expected to make as soon as his preoccupations in Russia permit. The speech will reassure the Russians who can absolutely count on this country pursuing the war until it is decisively won. It will encourage our friends in America, who may be sure that we shall not back out till we have made the Atlantic safe for the United States as well as ourselves. Vichy will be more uncomfortable than ever in the knowledge that we shall make no peace until such time as there is no longer a Nazi Government with which it can co-operate. And what about the German people themselves? The time may come when they, too, tired of war and gradually becoming tired of Hitler himself, will be made to realise that they can have no peace until the whole Nazi regime is swept away. Mr. Eden also said that we shall help the Russians or anyone else who fights Hitler, without reservations or second thoughts. That is wise. There is no place for old grudges against a nation which is sharing the fight against the enemy of civilisation.