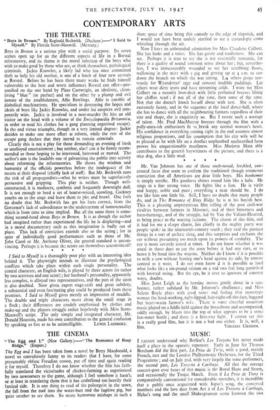 " The Egg and I." (New Gallery.)—" The Romance of Rosy Ridge." (Empire.) The Egg and I has been taken from a novel by Betty Macdonald, a novel so convulsively funny to its readers that I have, for some presumably obfusc Freudian reason, put off time and again reading it for myself. Therefore I do not know whether the film has faith- fully translated the vicissitudes of chicken-farming as experienced by two newcomers to the game, although I feel somehow it hasn't, or at least in translating them that it has underlined too heavily their farcical side. It is one thing to read of the poltergeist in the stove, the fall from the roof into the water-butt and the fugitive pig, but quite another to see them. So many humorous mishaps in such a

short space of time bring this comedy to the edge of slapstick, and I would not have been unduly startled to see a custard-pie come whistling through the air.

Now I have an unbounded admiration for Miss Claudette Colbert. She has looks and a voice. She has gaiety and tenderness. She can act. Perhaps it is true to say she is not essentially romantic, for there is a quality of sound common sense about her ; but, neverthe- less, I was immeasurably wounded to see her scrubbing floors, wallowing in the mire with a pig and getting up at 4 a.m. to saw down the branch on which she was sitting. Lt■ others grope ner- vously for Wyandottes' eggs and concoct inedible puddings. Let others wear dirty jeans and have streaming colds. I want my Miss Colbert on a moonlit boat-deck with little perfumed breezes lifting her chiffon scarf ; if not all of the time, then some of the time. Not that she doesn't knock herself about with zest. She is often extremely funny, and in the sequence at the local dance-hall, where she has to dance with all the neighbouring farmers regardless of their size and shape, she is exquisitely so. But I resent such a wastage of talent. Mr. Fred MacMurray breezes through the film with a polly-anna-ish enthusiasm fit to .break any normal woman's heart. His confidence in everything coming right in the end assumes almost religious proportions, and his assumption that his city wife will be as pleased as he with life on a derelict unplumbed unelectrified farm proves his unquestionable manliness. Miss Marjorie Main ably contributes to the general haywiriness of the picture, and there is a nice dog, also a little mad. * *

Mr. Van Johnson has one of those snub-nosed, freckled, tow- crested faces that seem to confirm the traditional though erroneous conviction that all Americans are dear little boys. His bonhomie is simply terrific. His goodness shines round him like a halo. He sings in a fine strong voice. He fights like a lion. He is virile and happy, noble and pure ; everything a man should be. I do not like him one little bit. Still, I have no doubt that many people do, and in The Romance of Rosy Ridge he is at his boyish best. This is a pleasing unpretentious film telling of the post civil-war rivalries between farmers in Missouri, and of their bitterness and barn-burnings, and of the struggle, led by Van the Valiant-Hearted, to bring peace to the warring factions. The charm of this film, and it had for me a sleepy charm, lies chiefly in the mighty purty way people spoke in the nineteenth-century south ; they said the purtiest things in a sort of archaic slang, and this surprises and enchants the ear without presuming too much upon its powers of credulity. The eye is more severely tested at times. I do not know whether it was usual in those days to cut the corn before it had any ears, or to heave it by hand into the wagons. Neither do I know if it is possible to milk a cow without leaning one's head against its side, by remote control as it were. I do not even know If it is possible to land what looks like a six-pound salmon on a rod two feet long garnished with knotted string. But the eye, be it ever so ignorant of country ways, doubts.

Miss Janet Leigh as the heroine moves gently about in a sun- bonnet, rather subdued by Mr. Johnson's ebullience ; and Miss Selena Royle plays with good sense and feeling that stereotype woman the hard-working, tight-lipped, hair-right-off-the-face, haggard but heart-warm farmer's wife. There is some cheerful mountain music played on a fiddle held against the breastbone and accompanied, oddly enough, by blasts into the top of what appears to he a stone hot-water bottle ; and there is a first-rate fight. I cannot say this is a really good film, but it is not a bad one either. It is, well, a