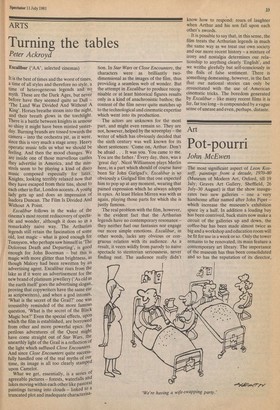 Excalibur ('AA', selected cinemas) It is the best of times and the worst of times, a time of all styles and therefore no style, a time of heterogeneous legends and no myth. These are the Dark Ages, but never before have they seemed quite so Dull — The Land Was Divided And Without A King'. Horses breathe steam into the night, and their breath glows in the torchlight. There is a battle between knights in armour SO shiny it might have been minted yesterday. Burning brands are tossed towards the camera — into the orchestra pit, as it were, since this is very much a stage army. Heavy Operatic music tells us what we should be feeling. And then the mood changes. We are inside one of those marvellous castles they advertise in America, and the minstrels seem to be playing a kind of disco music composed especially for lutes. Knights, looking terribly relaxed now that they have escaped from their tins, shout to each other in flat, London accents. A young lady gets up and does an impression of Isadora Duncan. The Film Is Divided And Without A Point.

Excalibur follows in the wake of the cinema's most recent rediscovery of spectacle and wonder, although it does so in a remarkably naive way. The Arthurian legends still retain the fascination of some old, lost magic — what is good enough for Tennyson, who perhaps saw himself in 'The .Dolorous Death and Departing', is good enough for John Boorman — but this is magic with more glitter than brightness, as though Malory had been rewritten by an advertising agent. Excalibur rises from the lake as if it were an advertisement for the new brand of platinum jewellery (`As old as the earth itself' goes the advertising slogan, proving that copywriters have the same ear as scriptwriters), and when a god intones, 'What is the secret of the Grail?' one Was irresistibly reminded of the more famous question, 'What is the secret of the Black Magic box?' Even the special effects, upon which the film is established, are borrowed from other and more powerful epics: the perilous adventures of the Quest might have come straight out of Star Wars, the unearthly light of the Grail is a reflection of the light which suffused Close Encounters. And since Close Encounters quite successfully handled one of the real myths of our time, its image is all too clearly stamped upon Camelot. What we get, essentially, is a series of agreeable pictures — forests, waterfalls and lakes moving within each other like pastoral paintings turning into clouds — linked to a truncated plot and inadequate characterisa tion. In Star Wars or Close Encounters, the characters were as brilliantly twodimensional as the images of the film, thus providing a seamless web of wonder. But the attempt in Excalibur to produce recognisable or at least historical figures results only in a kind of anachronistic bathos; the content of the film never quite matches up to the technological and cinematic expertise which went into its production.

The actors are unknown for the most part, and might even remain so. They are not, however, helped by the screenplay — the writer of which has obviously decided that the sixth century was well known for its short sentences: `Come on, Arthur. Don't be afraid. . . It was you. You came to me. You are the father.' Every day, then, was a 'great day'. Nicol Williamson plays Merlin here, in a part which should of course have been Sir John Gielgud's; Excalibur is so obviously a Gielgud film that one expected him to pop up at any moment, wearing that pained expression which he always adopts in epics. At least Helen Mirren was with us again, playing those parts for which she is justly famous.

The real problem with the film, however, is the evident fact that the Arthurian legends have no contemporary resonance — they neither fuel our fantasies nor engage our more simple emotions. Excalibur, in other words, lacks any obvious or congruous relation with its audience. As a result, it veers wildly from parody to naive spectacle to stentorian seriousness, never finding rest. The audience really didn't know how to respond: roars of laughter when Arthur and his son fall upon each other's swords.

It is possible to say that, in this sense, the film treats the Arthurian legends in much the same way as we treat our own society and our more recent history — a mixture of irony and nostalgia determines our relationship to anything clearly 'English', and we writhe gleefully but self-consciously in the toils of false sentiment. There is something demeaning, however, in the fact that our national stories can only be resuscitated with the use of American cinematic tricks. The boredom generated by Excalibur — like many recent films it is far, far too long — is compounded by a vague sense of unease and even, perhaps, distaste.