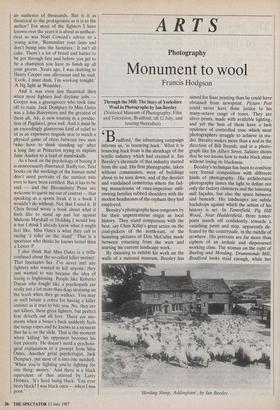 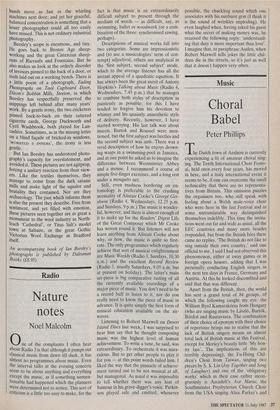 Through the Mill: The Story of Yorkshire Wool in Photographs by Ian Beesley (National Museum of Photography, Film and Television, Bradford, till 12 July, and touring thereafter) radford,' the advertising campaign informs us, 'is bouricing back.' What it is bouncing back from is the shrinkage of the textile industry which had created it. Ian Beesley's chronicle of that industry started from the end. His first photographs, taken without commission, were of buildings about to be torn down, and of the derelict and vandalised cemeteries where the fad- ing mausoleums of once-imperious mill- owning families rubbed shoulders with the modest headstones of the orphans they had employed.

Beesley's photographs have outgrown by far their unpretentious origin as local history. They stand comparison with the best, say Chris Killip's great series on the coal-pickers of the north-east, or the haunting pictures of Don McCullin made between returning from the wars and starting his current landscape work.

By choosing to exhibit his work on the walls of a national museum, Beesley has

aimed for finer printing than he could have obtained from newsprint. Picture Post could never have done justice to his many-octave range of tones. They are silver-prints, made with available lighting, and yet the best of them have a lush opulence of controlled tone which most photographers struggle to achieve in stu- dio. Beesley makes more than a nod in the direction of Bill Brandt, and in a photo- graph like his Albert Street, Saltaire shows that he too knows how to make black shine without losing its blackness.

Beesley's technique has been to combine very formal composition with different kinds of photography. His architectural photography tames the light to define not only the factory chimneys and the lowering mill façades, but also the space between and beneath. His landscapes are subtle backdrops against which the action of his history is set. In Tenterfield, Pig Hill Wood, Near Huddersfield, three tenter- posts march off confidently towards a vanishing point and stop, apparently de- feated by the countryside, in the middle of nowhere. His portraits are far more than ciphers of an archaic and dispossesed working class. The woman on the right of Burling and Mending, Drummonds Mill, Bradford looks staid enough, while her 'Herding Sheep, Addinghanf, by Ian Beesley hands move as fast as the whirling machines next door; and yet her graceful, balanced concentration is something that a lesser photographer could all too easily have missed. This is not ordinary industrial Photography.

Beesley's scope is enormous, and tiny. He goes back to Bronze Age sheep- working and the great Cistercian sheep- runs of Rievaulx and Fountains. But he also makes us look at the orderly disorder of invoices pinned to the back of a door, or tools laid out on a working bench. There is a little poem of a photograph, Fading Photographs on Tool Cupboard Door, Dixon's Bobbin Mills, Steeton, in which Beesley has respectfully preserved the snippings left behind after many years' work. By a gentle irony, the two cricketers pinned back-to-back on their tattered Cigarette cards, George Duckworth and Cyril Washbrook, both played for Lan- cashire. Sometimes, as in the missing letter on a blind façade of bricked-in windows, 'WORSTED S INNERS', the irony is less gentle.

But Ian Beesley has understood photo- graphy's capacity for overstatement, and avoided it. These pictures are not agitprop, forcing a unitary reaction from their view- ers. Like the textiles themselves, they manage to come from the dark satanic mills and make light of the squalor and brutality they contained. Nor are they archaeology. The past which informs them is also the present they describe. Free from sentiment, and yet filled with emotion, these pictures seen together are as great a monument to the wool industry as North- leach 'Cathedral', or Titus Salt's model town at Saltaire, or the great Gothic Victorian Wool Exchange in Bradford itself.

An accompanying book of Ian Beesley's Photographs is published by Dalesman Books (£8.95).