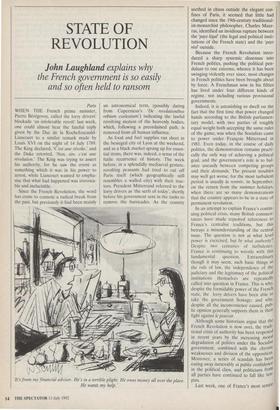 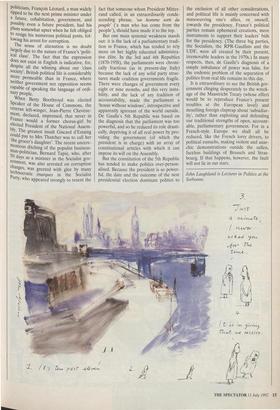 Paris WHEN THE French prime minister, Pierre Beregovoy, called the lorry drivers' blockade 'an intolerable revolt' last week, one could almost hear the fateful reply given by the Duc de la Rochefoucauld- Liancourt to a similar remark made by Louis XVI on the night of 14 July 1789. The King declared, 'C'est une revolte,' and the Duke retorted, Won, sire, c'est une revolution.' The King was trying to assert his authority, for he saw the event as something which it was in his power to arrest, while Liancourt wanted to empha- sise that what had happened was irrevoca- ble and ineluctable.

Since the French Revolution, the word has come to connote a radical break from the past, but previously it had been mainly an astronomical term, (possibly dating from Copernicus's 'De revolutionibus orbium coelestium') indicating the lawful revolving motion of the heavenly bodies, which, following a preordained path, is removed from all human influence.

As food and fuel supplies ran short in the besieged city of Lyon at the weekend, and as a black market sprang up for essen- tial items, there was, indeed, a sense of the futile recurrence of history. The week before, in a splendidly mediaeval gesture, revolting peasants had tried to cut off Paris itself (which geographically still resembles a walled city) with their trac- tors. President Mitterrand referred to the lorry drivers as 'the serfs of today', shortly before his government sent in the tanks to remove the barricades. As the country It's from my financial adviser. He's in a terrible plight. He owes money all over the place. He wants my help.' seethed in chaos outside the elegant con- fines of Paris, it seemed that little had changed since the 19th-century traditional- ist-monarchist philosopher, Charles Maur- ras, identified an invidious rupture between the 'pays legal' (the legal and political insti- tutions of the French state) and the 'pays reel' outside.

Because the French Revolution intro- duced a sharp systemic dissensus into French politics, pushing the political pen- dulum to one extreme, whence it has been swinging violently ever since, most changes in French politics have been brought about by force. A Frenchman now in his fifties has lived under four different kinds of regime, not including various provisional governments.

Indeed, it is astonishing to dwell on the fact that the first time that power changed hands according to the British parliamen- tary model, with two parties of roughly equal weight both accepting the same rules of the game, was when the Socialists came to power under Francois Mitterrand in 1981. Even today, in the course of daily politics, the demonstration remains practi- cally the only way of achieving a political goal, and the government's role is to bal- ance uneasily between competing groups and their demands. The present troubles may well get worse, for the most turbulent period is usually la rentree, in September, on the return from the summer holidays, when there are so many demonstrations that the country appears to be in a state of permanent revolution.

In an attempt to explain France's contin- uing political crisis, many British commen- tators have made repeated references to France's centralist traditions, but this betrays a misunderstanding of the central issue. The question is not at what level power is exercised, but by what authority? Despite two centuries of turbulence, France is continuing to wrestle with this fundamental question. Extraordinary though it may seem, such basic things as the rule of law, the independence of the judiciary and the legitimacy of the political institutions themselves are repeatedlY called into question in France. This is why, despite the formidable power of the French state, the lorry drivers have been able to take the government hostage; and why, despite all the inconvenience caused, pub- lic opinion generally supports them in their fight against le pouvoir.

Although some historians argue that the French Revolution is now over, the tradi- tional crisis of authority has been reopenq in recent years by the increasing moral degradation of politics under the Socialist government, combined with the chronic weaknesses and division of the opposition. Moreover, a series of scandals has beer eating away inexorably at public confidence in the political class, and politicians frog.' all parties have continued to fall like ten' pins.

Last week, one of France's most senior politicians, Francois Leotard, a man widely tipped to be the next prime minister under a future, cohabitation, government, and Possibly even a future president, had his Plans somewhat upset when he felt obliged to resign his numerous political posts, fol- lowing his arrest for corruption. The sense of alienation is no doubt largely due to the nature of France's 'polit- ical class'. The fact that the expression does not exist in English is indicative, for, despite all the whining about our 'class society', British political life is considerably more permeable than in France, where neither government nor opposition seems capable of speaking the language of ordi- nary people.

When Betty Boothroyd was elected Speaker of the House of Commons, the veteran left-winger, Jean-Pierre Chevene- ment, declared, impressed, that never in France would a former chorus-girl be elected President of the National Assem- bly. The greatest insult Giscard d'Estaing could pay to Mrs Thatcher was to call her the grocer's daughter'. The recent uncere- monious ditching of the populist business- man-politician, Bernard Tapie, who, after 50 days as a minister in the Socialist gov- ernment, was also arrested on corruption charges, was greeted with glee by many technocratic Marques in the Socialist Party, who appeared strongly to resent the fact that someone whom President Mitter- rand called, in an extraordinarily conde- scending phrase, `un homme sorti du peuple' Ca man who has come from the people'), should have made it to the top.

But one main systemie weakness stands out: it is the lack of a parliamentary tradi- tion in France, which has tended to rely more on her highly educated administra- tive elite. In the 3rd and 4th Republics (1870-1958), the parliaments were chroni- cally fractious (as in present-day Italy) because the lack of any solid party struc- tures made coalition governments fragile. There were changes of government every eight or nine months, and this very insta- bility, and the lack of any tradition of accountability, made the parliament a 'house without windows', introspective and apparently ignorant of the world outside. De Gaulle's 5th Republic was based on the diagnosis that the parliament was too powerful, and so he reduced its role drasti- cally, depriving it of all real power by pro- viding the government (of which the president is in charge) with an array of constitutional articles with which it can impose its will on the Assembly.

But the constitution of the 5th Republic has tended to make politics over-person- alised. Because the president is so power- ful, the date and the outcome of the next presidential election dominate politics to the exclusion of all other considerations, and political life is mainly concerned with manoeuvring one's allies, or oneself, towards the presidency. France's political parties remain ephemeral creations, mere instruments to support their leaders' bids for the presidency. (The three big parties, the Socialists, the RPR-Gaullists and the UDF, were all created by their present, irremovable leaders in the 1970s.) In many respects, then, de Gaulle's diagnosis of a simple imbalance of power was false, for the endemic problem of the separation of politics from real life remains to this day.

It is extraordinary to see the British gov- ernment clinging desperately to the wreck- age of the Maastricht Treaty (whose effect would be to reproduce France's present troubles at the European level) and mouthing foreign claptrap about `subsidiar- ity', rather than exploiting and defending our traditional strengths of open, account- able, parliamentary government. For in a French-style Europe we shall all be reduced, like the French lorry drivers, to political eunuchs, making violent and anar- chic demonstrations outside the sullen, faceless buildings of Brussels and Stras- bourg. If that happens, however, the fault will not lie in our stars.

John Laughland is Lecturer in Politics at the Sorbonne.