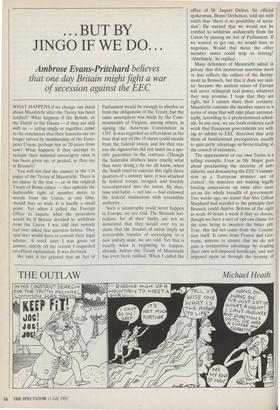 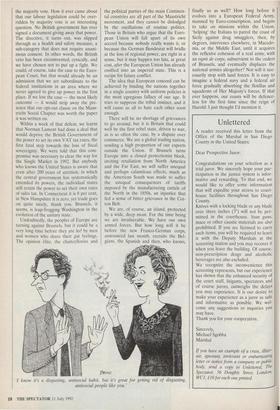 WHAT HAPPENS if we change our mind about Maastricht after the Treaty has been ratified? What happens if the British, or the Dutch or the Danes — if they are still with us — acting singly or together, come to the conclusion that their interests are no longer served by membership of the Euro- pean Union, perhaps ten or 20 years from now? What happens if they attempt to reclaim their national sovereignty once it has been given up, or pooled, as they say in Brussels?

You will not find the answer in the 134 pages of the Treaty of Maastricht. There is no clause in the text — or in the original Treaty of Rome either — that upholds the inalienable right of member states to secede from the Union, at any time, should they so wish. It is hardly a small point. Yet when I called the Foreign Office to inquire what the procedure would be if Britain decided to withdraw from the Union, I was told that nobody had ever asked that question before. They said they would have to consult their legal adviser. A week later I was given an answer, strictly off the record. I requested an official explanation. It was declined.

We take it for granted that an Act of Parliament would be enough to absolve us from the obligations of the Treaty, but the same assumption was made by the Com- monwealth of Virginia, among others, in signing the American Constitution in 1787. It was regarded as self-evident at the time that any of the 13 states could secede from the federal union, and for that rea- son the signatories did not insist on a spe- cific guarantee in the contract. (Though the federalist drafters knew exactly what they were doing.) As we all know, when the South tried to exercise this right three quarters of a century later, it was attacked by federal troops, ravaged, and forcibly reincorporated into the union. By then, time and habit — not law — had endowed the federal institutions with irresistible authority.

Such a catastrophe could never happen in Europe, we are told. The Brussels fed- eralists, for all their faults, are not so demented that they would ever try to claim that the treaties of union imply an irreversible transfer of sovereignty to a new unitary state, we are told. Yet that is exactly what is beginning to happen, already, before the Treaty of Maastricht has even been ratified. When I called the office of M. Jaques Delors, his official spokesman, Bruno Dethomas, told me with relish that 'there is no possibility of seces- sion'. He warned tbat we would not be entitled to withdraw unilaterally from the Union by passing an Act of Parliament. If we wanted to get out, we would have to negotiate. Would that mean the other member states could stop us leaving? 'Absolutely,' he replied.

Many defenders of Maastricht admit in private that this monstrous assertion more or less reflects the culture of the Berlay- mont in Brussels, but that it does not mat- ter because the ancient states of Europe will never relinquish real power, whatever they may promise. I hope that they are right, but I cannot share their certainty. Maastricht commits the member states to a series of steps that will take place automat- ically, according to a predetermined sched- ule. In any case, we see fresh evidence each week that European governments are will- ing to submit to EEC directives that strip them of fundamental prerogatives, usually to gain petty advantage in horse-trading at the council of ministers.

The appeasement of our own Tories is a telling example. Even as Mr Major goes about proclaiming the doctrine of sub- sidiarity and denouncing the EEC Commis- sion as a 'European monster out of control', his ministers are making legally binding concessions on issue after issue acrass the whole breadth of government. Two weeks ago, we learnt that Mrs Gillian Shephard had acceded to the principle that Brussels could deprive Britons of the right to work 49 hours a week if they so choose, though we have a sort of opt-out clause for the time being to sweeten the bitter pill. True, this did not come from the Commi- sion itself. It came from France and Ger- many, anxious to ensure that we do not gain a competitive advantage by evading their own self-imposed handicaps, and was imposed upon us through the tyranny of the majority vote. How it ever came about that our labour legislation could be over- ridden by majority vote is an interesting question. No British government has ever signed a document giving away that power. The directive, it turns out, was slipped through as a health and safety measure, a sub-category that does not require unani- mous consent. In other words, the British veto has been circumvented, cynically, and we have chosen not to put up a fight. We could, of course, take the case to the Euro- pean Court, but that would already be an admission that we are subordinate to the federal institutions in an area where we never agreed to give up power in the first place. If we lost the case — the most likely outcome — it would strip away the pre- tence that our opt-out clause on the Maas- tricht Social Chapter was worth the paper it was written on.

Within a week of that defeat, we learnt that Norman Lamont had done a deal that would deprive the British Government of the power to set its own VAT tax rates, the first fatal step towards the loss of fiscal sovereignty. We were told that this com- promise was necessary to clear the way for the Single Market in 1992. But anybody who knows the United States is aware that even after 200 years of attrition, in which the central government has systematically extended its powers, the individual states still retain the power to set their own rates of sales tax. In Connecticut it is 8 per cent, in New Hampshire it is zero, yet trade goes on quite nicely, thank you. Brussels, it seems, is leap-frogging Washington in the evolution of the unitary state.

Undoubtedly, the peoples of Europe are turning against Brussels, but it could be a very long time before they are led by men and women who share their gut feelings. The opinion elite, the chancellories and

the political parties of the main Continen- tal countries are all part of the Maastricht movement, and they cannot be dislodged by the oscillations of routine politics. Those in Britain who argue that the Euro- pean Union will fall apart of its own accord because nobody really wants it, or because the German Bundesrat will bridle at the loss of regional power, are right in a sense, but it may happen too late, at great cost, after the European Union has already ossified into an imperial state. This is a recipe for future conflict.

The idea that European concord can be achieved by binding the nations together in a single country with uniform policies is the most egregious fallacy of our age. It tries to suppress the tribal instinct, and it will cause us all to hate each other soon enough.

There will be no shortage of grievances to go around, but it is Britain that could well be the first rebel state, driven to war, as is so often the case, by a dispute over commerce. We are a global trading nation, sending a high proportion of our exports outside the Union. If Brussels turns Europe into a closed protectionist block, inviting retaliation from North America and the Far East, we will suffer unequal and perhaps calamitous effects, much as the American South was made to suffer the unequal consequences of tariffs imposed by the manufacturing cartels of the North in the 1850s, an injustice that fed a sense of bitter grievance in the Cot- ton Belt.

We are, of course, an island, protected by a wide, deep moat. For the time being we are invulnerable. We have our own armed forces. But how long will it be before the new Franco-German corps, announced last month, recruits the Bel- gians, the Spanish and then, who knows, know it's a disgusting, antisocial habit, but it's great for getting rid of disgusting, antisocial people like you.' finally us as well? How long before it evolves into a European Federal Army, manned by Euro-conscription, and begins to take on missions within the Union, `helping' the Italians to patrol the coast of Sicily against drug smugglers, then, by degrees, intervenes elsewhere, in Macedo- nia, or the Middle East, until it acquires the reflexive cohesion of a real army, with an esprit de corps, subservient to the orders of Brussels, and eventually displaces the national armies altogether? Nor will it nec- essarily stop with land forces. It is easy to imagine a federal navy and a federal air force gradually absorbing the flotillas and squadrons of Her Majesty's forces. If that ever happens, our coasts will be defence- less for the first time since the reign of Harold: I just thought I'd mention it.

A reader received this letter from the Office of the Marshal in San Diego County in the United States: Dear Prospective Juror: Congratulations on your selection as a trial juror. We sincerely hope your par- ticipation in the justice system is infor- mative and rewarding. To that end, we would like to offer some information that will expedite your access to court- house facilities throughout San Diego County.

Knives with a locking blade or any blade over three inches (3") will not be per- mitted in the courthouse. Stun guns, mace or other caustic materials are also prohibited. If you are licensed to carry such items, you will be required to leave it with the Deputy Marshals at the screening station and you may recover it when you leave the building. Of course, non-prescription drugs and alcoholic beverages are also excluded.

We recognize the inconvenience this screening represents, but our experience has shown that the enhanced security of the court staff, litigants, spectators and of course jurors, outweighs the delays you may experience. It is our desire to make your experience as a juror as safe and informative as possible. We wel- come any suggestions or inquiries you may have.

Thank you for your cooperation.

If you have an example of a crass, illiter- ate, ignorant, irrelevant or embarrassing letter or notice from a company or public body, send a copy to Unlettered, The Spectator, 56 Doughty Street, London, WC1. £10 for each one printed.