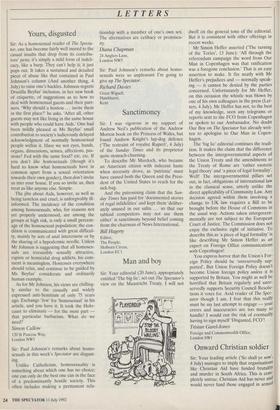 Sir: Your editorial (20 June), appropriately entitled 'The big lie', set out The Spectator's view on the Maastricht Treaty. I will not

dwell on the general tone of the editorial. But it is consistent with other offerings in recent weeks.

Mr Simon Heffer asserted (The turning of the Tories', 13 June): 'All through the referendum campaign the word from Our Man in Copenhagen was that ratification was a foregone conclusion.' That is an easy assertion to make. It fits neatly with Mr Heffer's prejudices and — normally speak- ing — it cannot be denied by the parties concerned. Unfortunately for Mr Heffer, on this occasion the whistle was blown by one of his own colleagues in the press (Let- ters, 4 July). Mr Heffer has not, to the best of my knowledge, seen any telegrams or reports sent to the FCO from Copenhagen or spoken to our Ambassador. No doubt Our Boy on The Spectator has already writ- ten to apologise to Our Man in Copen- hagen.

The 'big lie' editorial continues the tradi- tion. It makes the claim that the difference between the intergovernmental aspects of the Union Treaty and the amendments to the Treaty of Rome are 'rather esoteric legal theory' and 'a piece of legal formality'. Well! The intergovernmental pillars set out, in fact, obligations of international law in the classical sense, utterly unlike the direct applicability of Community Law. Any decision agreed within them involving a change to UK law requires a Bill to be brought before the House of Commons in the usual way. Actions taken intergovern- mentally are not subject to the European Court of Justice. The Commission does not enjoy the exclusive right of initiative. To describe this as 'a piece of legal formality' is like describing Mr Simon Heifer as an expert on Foreign Office communications with Copenhagen!

You express horror that the Union's For- eign Policy should be 'unreservedly sup- ported'. But Union Foreign Policy doesn't become Union foreign policy unless it is supported by Britain. You might as well be horrified that Britain regularly and unre- servedly supports Security Council Resolu- tions it votes for. Avid reader of The Spec- tator though I am, I fear that this really must be my last attempt to engage — your errors and inaccuracies are too many to handle! I would run the risk of eventually having to sign myself 'Disgusted, FC01 Tristan Garel-Jones