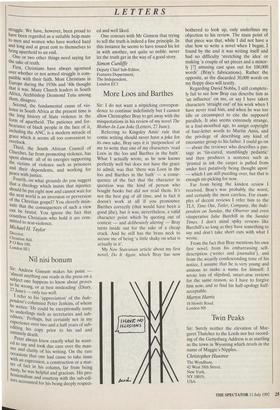 Sir: Andrew Gimson makes his point — almost anything one reads in the press on a subject one happens to know about proves to be wrong, or at best misleading' (Diary, 27 June) — only too well.

I refer to his 'appreciation' of the Inde- pendent's columnist Peter Jenkins, of whom he writes: 'He could be exceptionally nasty to underlings such as secretaries and sub- editors.' Perhaps, but certainly not in my experience over two and a half years of sub- editing his copy prior to his sad and untimely death.

Peter always knew exactly what he want- ed to say and took due care over the man- ner and clarity of his writing. On the rare issue

With that one had cause to take with an expression, a construction or a mat- ter of fact in his column, far from being nasty, he was helpful and gracious. His pro- fessionalism and courtesy with the sub-edi- tors accounted for his being deeply respect-

One concurs with Mr Gimson that trying to tell the truth is indeed a fine principle. In this instance he seems to have tossed his lot in with another, not quite so noble: never let the truth get in the way of a good story.