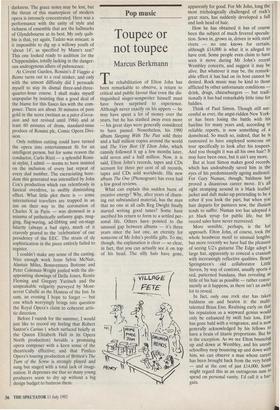 Toupee or not toupee

The rehabilitation of Elton John has been remarkable to observe, a return to critical and public favour that even the dis- tinguished singer-songwriter himself must have been surprised to experience. Although never exactly on his uppers — he may have spent a lot of money over the years, but he has stashed away even more — his great days were generally considered to have passed. Nonetheless, his 1990 album Sleeping With The Past sold three and a half million copies around the world and The Very Best Of Elton John, which cannily followed it up a few months later, sold seven and a half million. Now, it is said, Elton John's records, tapes and CDs account for three per cent of all records, tapes and CDs sold worldwide. His new album The One (Phonogram) has even had a few good reviews.

What can explain this sudden burst of creative energy? Why, after years of churn- ing out substandard material, has the man that no one at all calls Reg Dwight finally started writing good tunes? Some have ascribed his return to form to a settled per- sonal life. Others have pointed to the unusual gap between albums — it's three years since the last one, an eternity for someone of Mr John's prolific gifts. To me, though, the explanation is clear — so clear, in fact, that you can actually see it on top of his head. The silly hats have gone,

apparently for good. For Mr John, long the most trichologically challenged of rock's great stars, has suddenly developed a full and lush head of hair.

How he has obtained it has of course been the subject of much fevered specula- tion. Sewn in, grown in, driven in with steel rivets — no one knows for certain, although £14,000 is what it is alleged to have cost. Some people even claim to have seen it move during Mr John's recent Wembley concerts, and suggest it may be alive. But whatever it may be, the remark- able effect it has had on its host cannot be denied. Rock music may be kind to those afflicted by other unfortunate conditions — drink, drugs, cheeseburgers — but tradi- tionally it has had remarkably little time for baldies.

Think of Paul Simon. Though still suc- cessful as ever, the angst-ridden New York- er has been losing the battle with his hairline for many years and, according to reliable reports, is now something of a domehead. So much so, indeed, that he is rumoured to have employed someone on tour specifically to look after his toupees. And you thought it was all his own hair? It may have been once, but it ain't any more.

But at least Simon makes good records, which has undoubtedly saved him in the eyes of his predominantly ageing audience. For Gary Numan, though, baldness has proved a disastrous career move. It's all right stomping around in a black leather jacket and daft make-up pretending to be a robot if you look the part, but when you hair departs for pastures new, the illusion tends to suffer. Numan too has adopted a jet black syrup for public life, but his record sales have never recovered.

More sensible, perhaps, is the hat approach. Elton John, of course, took the whole headwear motif to unusual lengths, but more recently we have had the pleasure of seeing U2's guitarist The Edge adopt a large hat, apparently to conceal a cranium with increasingly reflective qualities. Bruce Springsteen's old collaborator Little Steven, by way of contrast, usually sports a red, patterned bandana, thus revealing as little of his hair as possible — rather conve- niently as it happens, as there isn't an awful lot to reveal.

In fact, only one rock star has taken baldness on and beaten it: the multi- talented Brian Eno. Realising early on that his reputation as a wayward genius would only be enhanced by swift hair loss, Eno has gone bald with a vengeance, and is now generally acknowledged by his fellows to have a brain of titanic proportions. But he is the exception. As we see Elton bouncing up and down at Wembley, and his unrulY schoolboy mop bouncing up and down with him, we can observe a man whose career has been brought back from the very brink — and at the cost of just £.14,000. Some might regard this as an outrageous sum te spend on personal vanity. I'd call it a bar- gain.