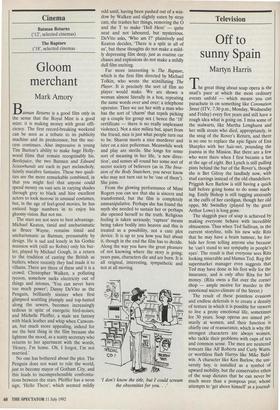 Batman Returns is a good film only in the sense that the Royal Mint is a good mint: it is making money with great effi- ciency. The first record-breaking weekend can be seen as a tribute to its publicity machine and its predecessor, but the suc- cess continues. Also impressive is young Tim Burton's ability to make huge Holly- wood films that remain recognisably his. Beetlejuice, the two Batmen and Edward Scissorhands are each in part melancholy, faintly macabre fantasies. These two quali- ties are the more remarkable combined, in that you might feel that anyone could spend money on vast sets in varying shades through grey to black and hire excellent actors to look morose in unusual costumes, but, in the age of feel-good movies, he has enticed huge numbers in to enjoy his gloomy vision. But not me.

The stars are not seen to best advantage. Michael Keaton, timid and uncharismatic as Bruce Wayne, remains timid and uncharismatic as Batman, presumably by design. He is sad and lonely in his Gothic mansion with (still no Robin) only his but- ler, played by Michael Gough, in a return to the tradition of casting the British as butlers, where recently they had made it to villains. There are three of these and it is a crowd: Christopher Walken, a polluting tycoon, somehow sucks electricity out of things and intones, 'You can never have too much power'; Danny DeVito as the Penguin, brilliantly sinister when first glimpsed scuttling plumply and top-hatted along the sewers, becomes increasingly tedious in spite of energetic bird-noises; and Michelle Pfeiffer, a male sex fantasy with black leather and whip when Catwom- an, but much more appealing, indeed for me the best thing in the film because she lightens the mood, as a scatty secretary who returns to her apartment with the words, 'Honey, I'm home. Oh, I forgot, I'm not married.'

No one has bothered about the plot. The Penguin does not want to rule the world, just to become mayor of Gotham City, and this leads to incomprehensible confronta- tions between the stars. Pfeiffer has a neon sign, 'Hello There', which seemed mildly odd until, having been pushed out of a win- dow by Walken and slightly eaten by stray cats, she trashes her things, removing the 0 and the T to make 'Hell Here' — quite neat and not laboured, but mysterious. DeVito asks, 'Who am I?' plaintively and Keaton decides, 'There is a split in all of us', but these thoughts do not make a mild- ly depressing film deep, just as routine car chases and explosions do not make a mildly dull film exciting.

Far more interesting is The Rapture, which is the first film directed by Michael Tolkin, who wrote the scintillating The Player. It is precisely the sort of film no player would make. We are shown a woman almost literally in a box, repeating the same words over and over: a telephone operator. Then we see her with a man who has the sort of 'charm' that repels picking up a couple for group sex ( hence the '18' certificate — there is no really unpleasant violence). Not a nice milieu but, apart from the friend, nice is just what people turn out to be. Sharon meets a nice murderer and later on a nice policeman. Meanwhile work and play are sterile. She longs for some sort of meaning in her life, 'a new direc- tion', and senses all round her some sort of secret society of believers (as in The Inva- sion of the Body Snatchers, you never know who may not turn out to be 'one of them'). She joins.

From the glowing performance of Mimi Rogers you can see that she is sincere and transformed, but the film is completely unmanipulative. Perhaps she has found the myth she needed to sustain her or perhaps she opened herself to the truth. Religious feeling is taken seriously; 'rapture' means being taken bodily into heaven and this is treated as a possibility, not a cute plot device. It is up to you how you feel about it, though in the end the film has to decide. Along the way you have the great pleasure of not knowing where the story is going; years pass, characters die and are born. It is all original, interesting, sympathetic and not at all moving.

'I don't know the title, but I could scream the obscenities for you. .