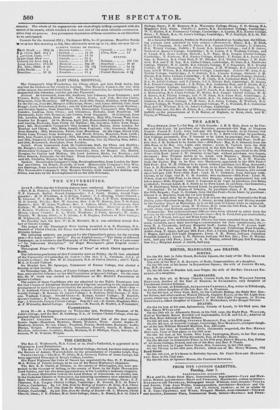 On the 5th inst. at Harden Ash, near Ongar, the wife of the Rev. CHARLES Ene n t Des, of a daughter.

On the 31st ult. at Briny Church, County Cork, the Hon. WILLIAM SMYTM BERNARD, brother of the Earl of Baudon, to ELIZABETH, only daughter of

On the 1st inst. at Edinburgh, ALEXANDER CAMPBELL, Esq. writer in Edinburgh, to JANE, eldest daughter of the late Rev. Dr. A. Thomson. On the 9th inst. at Prior Park, Bath, by the Catholic Bishop, the Right Rev. Doc-

goons, eldest some of the late Colonel Ellis, of the 25th Light Dragoons, to ELIZA HEORGIANA, eldest daughter of Colonel J. L. Richardson, of the Bengal Service.

On the let inst. at his seat, Aglinaverna, County of Louth, in his 63rd year, the Hon. Baron WeLBLAND. On the 28th ult. in Albemarle Street, in his 74th year, the Right Hon. WILL/Am,

Earl of Northesk, Baron Rnsehill and Inglismaldie, G.C.B. and LL.D., Admiral of the Red, Rear-Admiral of Great Britain.

On the 2nd inst, at Southwell. Notts, universally respected, the Rev. HENRY Hoe SON, Vicar of that place, in his 78th year.

On the 4th inst. at her house, New Lane, Lymington, Hants, in her 91st year, CELLA, relict of the late Philip Bromfield. Esq. of Boldre, Hants.

On the 4th inst. in Gloucester Place, in his 28th year, PERCY MEADE, Esq. Fellow

of All Souls College, Oxford, and son of the Hon. and Rev. P. Meade.

On the 8th inst. in Upper Baker Street, Mrs. SIDDONS, in her 76th year. On the 7th inst. in his 16th year, HENRY, eldest son of Mr. Henry Watson, Old Boon! tShterelent. h inst. at Ifs house in Berkeley Square, Sir JOHN EDWARD HARING- TON, Bart. in his 72nd year. On the 8110 inst. at Spencer House, the Countess SPENCER.