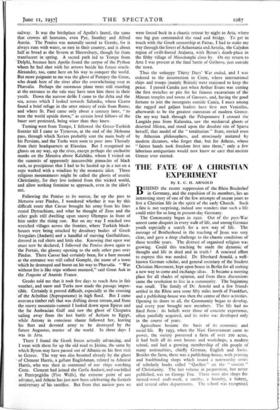 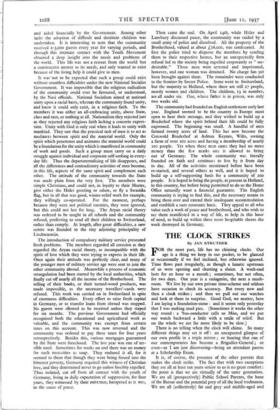 THE FATE OF A CHRISTIAN EXPERIMENT

By E. C. H. ARNOLD BEHIND the recent suppression of the Rhon Bruderhof in Germany, and the expulsion of its members, lies an interesting story of one of the few attempts of recent years to live a Christian life in the spirit of the early Church. Such a fate is not surprising, indeed one wonders that such a life could exist for so long in present-day Germany.

The Community began in 1920. Out of the post-War unrest came disquiet in every walk of life, and among German youth especially a search for a new way of life. The message of Brotherhood in the teaching of Jesus was very clear, and gave a deep challenge to the chaotic conditions of those terrible years. The distrust of organised religion was growing. Could this teaching be made the dynamic of thought and life in deed and in truth ? A renewed effort to express this was needed. Dr. Eberhard Arnold, a well- known German scholar, and general secretary of the Student Christian Movement, kept open house in Berlin for all seeking a new way to come and exchange ideas. It became a meeting place for all shades of opinion, and from these discussions came the resolution to live in a community. The beginning was small. The family of Dr. Arnold and a few friends settled in the Rhon area some fifty miles north of Frankfurt, and a publishing-house was then the centre of their activities. Opening its doors to all, the Community began to develop, and every year brought new members. The life had no fixed form : its beliefs were those of concrete experience, • often painfully acquired, and its order was developed only ' in the course of years.

• Agriculture became the basis of its economic and social life. By 1933, when the Nazi Government came to power, the society possessed a farm of over 200 acres, it had built all its own houses and workshops, a modern school, and had a growing membership of 16o people of many nationalities, chiefly German, English and Swiss. Besides the farm, there was a publishing-house, with printing and bookbinding shops which issued a noteworthy series of scholarly books called " Quellen " on the " sources " of Christianity. The last volume in preparation, but never published, was on George Fox. There were also shops for turned-wood craft-work, a smithy, a laundry, a bakery, and several other departments. The school was recognised and aided financially by the Government. Among other tasks the adoption of difficult and destitute children was undertaken. It is interesting to note that the community received 2-3,000 guests every year for varying periods, and through this intimate contact with the Youth Movement obtained a deep insight into the needs and problems of the world. This life was not a retreat from the world but a constructive answer to its needs, and only wanted to exist because of the living help it could give to men.

It was- not to be expected that such a group could exist without countless difficulties under the new National Socialist Government. It was impossible that the religious radicalism of the community could ever be favoured, or understood, by the Nazi officials. National Socialism aimed at national unity upon a racial basis, whereas the community found unity, and knew it could only exist, in a religious faith. To the members it was either an all-embracing unity, above State, class and race, or nothing at all. Nationalism they rejected just as they rejected any religious faith lacking a concrete expres- sion. Unity with God is only real when it leads to unity with mankind. They saw that the practical task of men is to act as mediators between spirit and the material world. Only the spirit which penetrates and animates the material world could be a foundation for the unity which is manifested in community of work and goods. Such a group must carry on a daily struggle against individual and corporate self-seeking in every-. day life. Thus the departmentalising of life disappears, and all the differences and contradictory activities of men become, in this life, aspects of the same spirit and complement each other. The attitude of the community towards the State was made plain from the very first. The members were simple Christians, and could not, in loyalty to their Master, give either the Hitler greeting or salute, or fly a Swastika flag, but in all that was good, winter-relief work for example, they willingly co-operated. For the moment, perhaps because they were not political enemies, they were ignored, but this could not last for long. The Aryan racial theory was ordered to be taught in all schools and the community refused, preferring to send all their children to Switzerland, rather than comply. At length, after great difficulties, a new centre was founded in the tiny adjoining principality of Liechtenstein.

The introduction of compulsory military service presented fresh problems. The members regarded all coercion as they regarded the Aryan racial theory, as incompatible with the spirit of love which they were trying to express in their life. Once again their attitude was perfectly clear, and many of the younger men of military service age were sent to join the other community abroad. Meanwhile a process of economic strangulation had been started by the local authorities, which finally cut off nearly all the income of the Brotherhood. The selling of their books, or their turned-wood products, was made impossible, as the necessary travellers'-cards were refused. This work was carried on in Switzerland in spite of enormous difficulties. Every effort to raise fresh capital in Germany, or to transfer loans from abroad was stopped. No guests were allowed to be received unless they stayed for six months. The previous Government had officially recognised both the educational and agricultural work as valuable, and the community was exempt from certain taxes on this account. This was now reversed and the community was ordered to pay these taxes for four years retrospectively. Besides this, various mortgages guaranteed by the State were foreclosed. The last year was one of ter- rible need. Sometimes for weeks on end there was no money for such necessities as soap. They endured it all, for it seemed to them that though they were being forced into the bitterest poverty, Germany required this witness of Christian love, and they determined never to go unless forcibly expelled. Thus isolated, cut off from all contact with the youth of Germany, living in daily expectation of suppression, for four years, they witnessed by their existence, hampered as it was, to the cause of peace. Then came the end. On April t4th, while Hitler and Lansbury discussed peace, the community was raided by a small army of police and dissolved. All the property of the Brotherhood, valued at about L16,000, was confiscated. At first the police tried to disperse the members by sending them to their respective homes, but an unexpectedly firm refusal led to the society being expelled corporately as "un- desirable." Three men were arrested and imprisoned, however, and one woman was detained. No charge has yet been brought against them. The remainder were conducted to the frontier by Secret Police. Some went to Switzerland, but the majority to Holland, where there are still 27 people, mostly women and children. The children, 13 in number, are all under six. One, whose father is in prison, was only two weeks old.

The community had founded an English settlement early last year. England seemed to be the country in Europe most open to hear their message, and they wished to build up a Bruderhof where the spirit behind their life could be fully expressed. The beginning was small. A handful of men farmed twenty acres of land. This has now become the Cotswold Bruderhof at Ashton Keynes, Wilts, owning a farm of over 200 acres and having a membership of nearly 103 people. Yet when these men cam: they had no more money than the few marks one is allowed to bring out of Germany. The whole community was literally founded on faith and continues to live by it from day to day. All of the activities mentioned before have been re-started, and several others as well, and it is hoped to build up a self-supporting basis for a community of 200 people. It is hoped to bring the people, at present in Holland, to this country, but before being permitted to do so the Home Office naturally want a financial guarantee. The English community is trying to find this, and the necessary means to bring them over and extend their inadequate accommodation and establish a sure economic basis. They appeal to all who value such a work of peace and brotherhood, and who wish to see them manifested in a way of life, to help in this hour of need, to build up within these more hospitable shores the work destroyed in Germany.