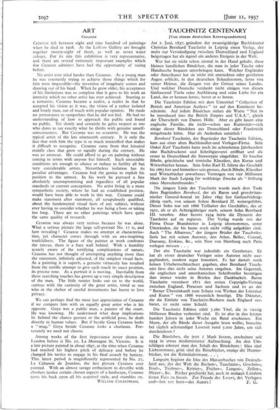 CEZANNE left between eight and nine hundred oil paintings when he died in 1.906. At the Lefevre Gallery are brought together twenty-eight of them, as• well as seven water colours. For its size this exhibition is very representative, and there are several extremely important examples which few Cezanne admirers have had the opportunity of seeing before.

No artist ever tried harder than Cezanne. As a young man he was constantly trying to achieve those things which for him were impossible—the invention of imaginary scenes and drawing out of his head. When he grew older, his acceptance of his limitations was so complete that it gave to his work an intensity which no other artist has ever achieved. Starting as a romantic, Cezanne became a realist, a realist in that he accepted his vision as it was, the vision of a rather isolated and lonely man, out of touch with popular opinion. He made no pretensions to sympathies that he did not feel. He had no understanding of how to approach the public and found no public. Yet slowly and certainly he gains respect as one who dares to say exactly what he thinks with genuine unself- consciousness. But Cezanne was no eccentric. He was the

• typical artist of the late nineteenth century. It is only the fact that with him the type is so much intensified that makes it difficult to recognise. Cezanne came from that leisured middle class that grew so rapidly during the century. He was an amateur. He could afford to go on painting without coming to terms with anyone but himself. Such unsociable conditions are enough to silence or reduce to futility all but very considerable artists. Nevertheless isolation has its peculiar advantages. Cezanne had the genius to exploit his position to the utmost. In his work he pursued a line absolutely uncompromising and regardless of all *popular standards or current conceptions. No artist living in a more sympathetic society, where he had an established position, would have been able to work in this way. Cezanne could make statement after statement, all scrupulously qualified, about the fundamental visual facts of any subject, without ever having to consider whether he was being a bore or taking too long. There are no other paintings which have quite the same quality of research.

Cezanne was always very serious because he was alone. What a serious picture the large self-portrait No. 17 is, and how revealing ! Cezanne makes no attempt at characterisa- tion, yet character comes through with an awe-inspiring truthfulness. The figure of the painter at work confronts the canvas, there is a bare wall behind. With a humility acutely aware of the terrifying complications of nature, Cezanne has not thought of attempting anything more than the statement, infinitely adjusted, of the simplest visual facts. As a painting it is superb, a genuine virtuosity has resulted from the terrific attempt to give each touch its exact position, its precise tone. As a portrait it is moving. Inevitably from those searching touches has grown up a very simple description of the man. The little rentier looks out on to the world, curious with the curiosity of the great artist, timid as one who in the shelter of careful investments has learnt to love privacy.

We can perhaps find the most just appreciation of Cezanne if we compare him with an equally great artist who is his opposite. Goya was a public man, a painter of the court. He was knowing. He understood what deep implications lie behind the chance gesture or the artificial pose, he dealt directly in human values. But if beside Goya Cezanne looks a "mug," Goya beside Cezanne looks a charlatan. For- tunately we need not choose.

. Among works of the first importance never shown in London before is No. 22, La Montague St. Victoire. It is a late picture painted in about 1897, at the time when Cezanne had reached his highest pitch of delicacy and before he changed his tactics to engage in his final assault by battery. This latest period is magnificently represented by No. 27, Le Cabanon de Jourdan, the last picture Cezanne ever painted. With an almost savage enthusiasm to describe with absolute justice certain chosen aspects of a landscape, Cezanne turns his back upon all his acquired style, and stumbles on.