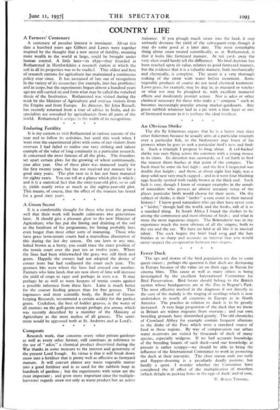 A centenary Of peculiar interest is imminent. About this date a hundred years ago Gilbert and Lawes were together inspired by the thought that a new secret of fertility, meaning more wealth to the world at large, could be brought under human control. A little later—in 1839—they founded at Rothamsted in Hertfordshire a research station at which the soil in all its properties was to be studied. This oldest and best of research stations for agriculture has maintained a continuous policy ever since. It has increased of late out of recognition in the variety of its researches (for example, into bee problems) and in scope, but the experiments begun almost a hundred years ago are still carried on and form what may be called the vertebral thesis of the Institution. Rothamsted was visited during the week by the Minister of Agriculture and oversea visitors from the Empire and from Europe. Its director, Sir John Russell, has recently returned from a tour of advice in India, and its specialists are consulted by agriculturists from all parts of the world. Rothamsted is unique in the width of its recognition.

It is my custom to visit Rothamsted at various seasons of the year and to follow its activities, but until this week when I went over the experimental plots with some of our visitors from overseas I had failed to realise one very striking and salient example of the value of long continuity in a particular research. It concerned the most famous of all •the plots. The founders set apart certain plots for the growing of wheat continuously, year after year. One of these plots was manured yearly for the first twenty years, but has not received any manure for a good sixty years. The plot next to it has not been manured for eighty years. You can tell at a glance which plot is which; and it is a statistical fact that the sixty-year-old plot, so to call it, yields nearly twice as much as the eighty-year-old plot. This means, of course, that the effect of the manure has lasted for a good sixty years.

A Green Secret It is a comfortable thought for those who treat the ground well that their work will benefit cultivators two generations later. It should give a pleasant glow to the new Minister of Agriculture, who has put the liming and draining of the soil in the forefront of his programme, for liming probably lasts even longer than most other sorts of manuring. Those who have grass lawn-tennis courts had a marvellous illustration of this during the last dry season. On one lawn at any rate, baked brown as a berry, you could trace the exact position of the tennis court over the past ten or twelve years. Where the lines had been whitewashed the grass was still fresh and green. Happily the owners had not adopted the device of corner irons but had readjusted the court each year. The greenest bits were where the lines had crossed one another. Farmers who lime lands that are now short of lime will increase the yield of crops in 1950 and perhaps in 2000 Al). It may perhaps be as well to warn keepers of tennis courts against a possible inference from these facts. Lime is much better for the coarser feeding grasses than for fine grasses. That ingenuous and most scientific body, the Board of Green- keeping Research, recommend a certain acidity for the perfect green. Cocksfoot, the best of fodder grasses, is the worst of all enemies on the golf-green except perhaps poa annua, which was recently described by a member of the Ministry of Agriculture as the most useless of all grasses. The senti- ment would be approved both at St. Andrews and at Lord's.

Research work, that concerns every other private gardener as well as every other farmer, still continues in reference to the use of " adco," a chemical product discovered during the War thanks in some measure to the interest and generosity of the present Lord Iveagh. Its virtue is that it will break down straw into a fertiliser that is pretty well as effective as farmyard manure. It will convert almost any waste vegetable matter into a good fertiliser and is so used for the rubbish heap in hundreds of gardens ; but the experiments with straw are the most important ; and grow more important since the multiple- harvester regards straw not only as waste product but an active nuisance. If you plough much straw into the land, it may seriously decrease the yield of the subsequent crop, though it may do some good at a later date. The most remarkable thing about straw treated scientifically, as at Rothamsted, is that it looks like farmyard manure. At ten yards away the very elect could hardy tell the difference. No final decision has been reached upon its value, relative to good farmyard manure, but the evidence that it is a valuable manure, both mechanically and chemically, is complete. The secret is a very thorough soaking of the straw with water before treatment. Some vegetable products of course do not need chemical treatment. Lawn grass, for example, may be dug in, as mustard or vetches or what not may be ploughed in, with excellent manurial effects and moderately prompt action. Nor is adco or other chemical necessary for those who make a " compost " such as becomes increasingly popular among market-gardeners. Any green rubbish whatever laid in a pit with a thin layer or two of farmyard manure in it is perhaps the ideal fertiliser.

An Obvious Shrike The dry fly fisherman argues that he is a better man than other fishermen because he usually aims at a particular triumph over a particular fish, so the birdsnester may boast of his prowess when he goes to seek a particular bird's nest and finds it. Such a triumph I propose to brag about. A red-backed shrike was seen flying across the common with a young mouse in its claws. Its direction was eastwards, so I set forth to find the nearest thorn bushes at that point of the compass. The bush must be some six feet high ; and the first I inspected was double that height ; and there, at about eight feet high, was a deep solid nest very much cupped, and in it were four blushing eggs heavily spotted with ruddy brown at the thick end. Such luck is rare, though I know of stranger examples in the annals of naturalists who possess an almost uncanny sense of the places particular birds would choose for their nests. On the subject of shrike, is their "larder" a rare event in their natural history ? I know good naturalists who say they have never seen a "larder," though half the world, and the books, talk of it as a standard thing. In South Africa I found the shrikes to be among the commonest and most obvious of birds ; and what is more the most ingenious singers. The l3okmakerie was in my experience much the most obvious of all the singers, both to the eye and the ear. We have no bird at all like it in musical talent. The cock begins the brief loud song and the hen finishes at so sharp and accurate an interval that you would never suspect the co-operation between two singers.

Fewer Duck The ups and downs of the bird population are due to some queer causes ; perhaps the queerest is that duck are decreasing in Europe because of the value set on their eggs in Russia for cinema films. This cause as well as many others is being investigated by the excellent International Committee for Bird Preservation. Bird lovers should belong to the British section whose headquarters are at the Zoo in Regent's Park. The most effective method in the diagnosis if not directly in the cure of the malady is the ringing of nestlings which is now undertaken in nearly all countries in Europe as in North America. The practice in relation to duck is to be greatly increased. A very large proportion of the duck that we know in Britain are winter migrants from overseas ; and our Own breeding grounds have diminished greatly. The old chronicles of Crowland Abbey for example contain frequent allusions to the drake of the Fens which were a standard source of food in these regions. By way of compensation our urban water reservoirs are visited by thousands of duck of many species, especially widgeon. If we had accurate knowledge of the breeding haunts of such duck—and our knowledge at present is rather scrappy—we should be able to bring the influence of the International Committee to work in protecting the duck at their nurseries. The close season ends too early and flapper-shooting is a peculiarly deadly pastime, but hardly a sport. I wonder whether the Committee have considered the ill effect of the multiplication of moorhen (which delight in pecking holes in the eggs of duck) and of coot.