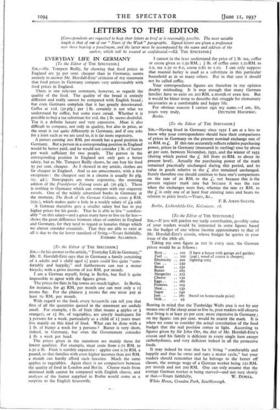 [Correspondents are requested to keep their letters as brief as is reasonably possible. The most suitable length is that of one of our "News of the Week" paragraphs: Signed letters aregiven a preference over those bearing a pseudonym, and the latter must be accompanied by the name and address of the author, which will be treated as confidential.—Ed. THE SPECTATOR.] [To the Editor of THE SPECTATOR.] Si,—Mr. Tempest Reilly, by showing that food prices in England are 35 per cent, cheaper than in Germany, seems entirely to answer Mr. Horsfall-Ertz' criticism of my statement that food prices in Germany compare very unfavourably with food prices in England.

There is one relevant comment, however, as regards the quality of the food. The quality of the bread is entirely different and really cannot be compared with English bread ; but even Germans complain that it has greatly deteriorated. Coffee at sod. (50 pfg.) per 1 lb. certainly is not what we understand by coffee, but some roast cereal. Whether it is possible to buy a tea substitute for sod. the 1 lb. seems doubtful. Tea is a definite luxury and very expensive. Meat is also difficult to compare, not only in quality, but also in price, as the meat is cut quite differently in Germany, and if one asks for a joint such as we are used to, it is far more expensive.

A person earning zoo RM. per month has a good position in

Germany. But a person in a corresponding position in England would be better paid, and he would not consider 4 lb. of butter per week sufficient for two people. The person in the corresponding position in England not only gets a better salary, but as Mr. Tempest Reilly shows, he can buy his food 35 per cent. cheaper. As I showed in my article, clothes are far cheaper in England. And so are amusements, with a few exceptions : the cheapest seat in a cinema is usually 8o pfg. (is. 4d.). Newspapers are more expensive, the morning edition of the Frankfurter Zeitung costs 4d. (20 pfg.). There is nothing in Germany which can compare with our sixpenny novels. One of the widely advertised books in Germany at the moment, The Book of the German Colonies, costs 9 RM. (is.), which makes quite a hole in a weekly salary of £4 odd.

A German therefore gets a smaller salary but has to• pay higher prices for his goods. That he is able to live " comfort- ably " on this salary—and a great many have to live on far less— shows the great difference between ideas of comfort in England and Germany, for they tend to regard as luxuries things which we almost consider essentials. That they are able to exist at all is due to the far lower standard of living.—Yours faithfully, EVERARD ALLARDIC.E.