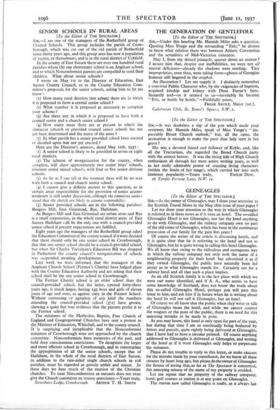 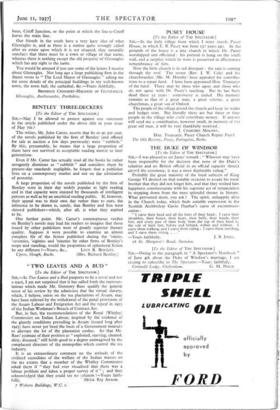 GLENEAGLES [To the _Editor of THE SPECTATOR.]

Gleneagles Hotel is not Gleneagles, nor has the hotel anything to do with Gleneagles, and the railway company own no part of the old estate of Gleneagles, which has been in the continuous possession of our family for the past 800 years I,

Of course the writer of the .article is discussing hotels, and it is quite dear that he is referring to the hotel and not to

Gleneagles, but he is quite wrong in calling this hotel Gleneagles. We all know that owing to the ridiculous and outrageous way in which the railway company not only took the name of - neighbouring property for their hotel but advertised it as if they owned Gleneagles, the public have naturally been led astray as to what Gleneagles stands for. Certainly not for a railway hotel and all that such a place implies.

As an old Scottish family it is the last place with which we want our name identified, and if A. A.,. who seems to have some knowledge of Scotland, does not know the truth about this so-called Gleneagles Hotel, perhaps you, will pass . this letter to him, and ask him if in future when he is writing about the hotel he will not call it Gleneagles, but an hotel.

Of course we all know that the public when they write or talk of Gleneagles mean the hotel, and while we cannot control the tongues or the pens of the public, there is no need for this annoying mistake to be made in print.

As you may know, this hotel is only open for part of the year, but during that time I am so continually being bothered by

Please do not trouble to reply to this letter, Or make excuses for the mistake made by your contributor, for we know all these excuses by heart long ago, but please do the owner of Gleneagles the favour of seeing that, so far as The Spectator is concerned, this annoying misuse of the name of my property is avoided.

Let me repeat that no property of the railway company, hotel, golf courses or station is at any point on Gleneagles.

The station now called Gleneagles is really, as it always has

been, Crieff Junction, or the point at which, the line to Crieff leaves the main line.

Our friends in the south have a very hazy idea of what Gleneagles is, and as there is a station quite wrongly called after an estate upon which it is not situated, they naturally conduce that there must be a town or village of that name, whereas there is nothing except the old property of Gleneagles which has any right to the name.

You would be amused if you saw some of the letters I receive about Gleneagles. Not long ago a large publishing firm in the States wrote to "The Lord Mayor of Gleneagles" asking me for some details of the principal buildings in my well-known town, the town hall, the cathedral, &c.—Yours faithfully, BRODRICK CHINNERY-HALDANE OF GLENEAGLIS. Gleneagles, Auchterarder, Perthshire.