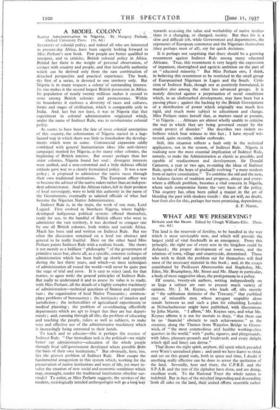 STUDENTS of colonial policy, and indeed all who are interested in present-day Africa, ,have been eagerly looking forward to

Miss Perham's new book. Few people are better qualified to interpret, and to criticise, British colonial policy in Africa. Behind her there is the weight of personal observation, of contact with country and people, and that invaluable authority which can be derived only from the rare combination of detached perspective and practical experience. The book, the first of a series, is devoted to one territory only But Nigeria is in many respects a colony'of outstanding interest. Its size makes it the second largest British possession in Africa.

Its population of nearly twenty millions makes it second:to none among British colonies and protectorates. Within its boundaries it encloses a diversity of, races and cultures, forms and stages of civilisation, which is comparable only to India. And, last but not least, it was in Nigeria that that experiment in colonial administration originated which, under the name of Indirect Rule, was to revolutionise colonial policy.

As seems to have been the fate of most colonial enterprises of this country, the colonisation of Nigeria started in a hap- hazard way in which there was little to foreshadow the develop- ments which were to come. Commercial expansion oddly combined with general humanitarian ideas (the anti-slavery campaign) marked for Nigeria, as for many other colonies, the beginning of British, interest. But .sooner perhaps than her sister colonies, Nigeria found her soul : divergent interests were unified, and a non-committal and a little dubious official attitude gave way to a clearly formulated policy. It was a new policy ; it proposed to administer the native races through their own traditional institutions. The European officer was

to become the adviser of the native rulers rather than an indepen- dent administrator. And the African rulers, left in their position of local sovereignly, were to hold. this authority in the name of the Government, eventually as salaried officials of what had become the Nigerian Native Administration.

Indirect Rule is, in the main, the work of one man, Lord Lugard. First evolved in Northern Nigeria, where highly-.

developed indigenous political systems offered themselves, ready for use, to the handful of British officers who were to administer the vast territory, it was destined to conquer one by one all British colonies, both within and outside Africa.

Much has been said and written on Indirect Rule. But too often the discussion remained on a level too abstract and general to be really fruitful. Here on the other hand Miss Perham paints Indirect Rule with a realistic brush. She shows it not merely as a brilliant " philosophy " of the government of

primitive races but, above all, as a specific, concrete technique of

administration which has been built up slowly and patiently during the last thirty years, and which—as most techniciiid of administration all round the world—will never be quite past the stage of trial and error. It is easy to reject (and, for that matter, to agree with) the general principles of Indirect Rule.

But really to understand it and to assess its value is to study, with Miss Perham, all the details of a highly complex machinery of administration—technical questions of finance and expendi- ture; the organisation of local Native Treasuries ; common- place problems of bureaucracy ; the intricacies of taxation and jurisdiction ; the technicalities of agricultural experiments or medical planning ; the problem of co-ordinating effecti'vely departments which are apt to forget that they are but depart- ments •; arid, running thrbugh all this, the problem of educating

and teaching the people, rulers as well as subjects, to make wise and effective use of the administrative machin.ery which is increasingly being entrusted to their hands.

To teach and to educate—this is perhaps the essence of Indirect Rule. "Our immediate task is the political—we might better say administrative—education of the whole people

through local self-government developed where possible 'ofn the basis of their ovvn institutions." But obviously, here, -too, lies the gravest problem of Indirect Rule. How escape the fundamental antagonism in this system which, working for the preservation of native institutions and ways of life, yet must in- volve the creation of new social and economic conditions which may, overnight, render the traditional institutions obsolete sur- vivals? To enlist, as Miss Perham suggests, the services of the modern, sociologically minded anthropologist will go a long—wit-Si

towards assessing_tlie value, arid workability of native institu- tions in a changing, Or changed, society. But then his is a slow and difficult job, while Government and departments, the exponents of European commerce and the Nigerians themselves (they perhaps most of all), cry for quick decisions.

It is perhaps not surprising that.there should be a growing resentment against Indirect Rule among many educated Africans. True, this resentment is very largely the expression of impatient, shortsighted and egoistic ambition on the part of an "educated minority." But Miss Perham errs, I think, in 'believing this resentment to be restricted to -.the small group of- Europeanised Nigerians in Lagos and the South. Criti- cism of Indirect Rule, though not as positively formulated, is manifest also among the other less advanced groups. It is mainly directed against a perpetuation of social conditions which, in an Undisturbed development, may have been but a passing phase ; against the backing by the British Goverpment of a distribution of power Which originfilly was much less rigid, and much more subject to adjustment and change. Miss Perham states herself that, as matters stand at present, "in Nigeria. . . Africans are almost wholly unable to criticise the way in which they are being governed except by the crude protest of disorder." She describes two violent re- bellions which bear witness to this fact ; I have myself wit- nessed, quite recently, similar outbreaks.

Still, this situation reflects a fault only in the technical application, not in the system, of Indirect Rule. Nigeria is realising now the most essential implication of Indirect Rule, namely, to make the Administration as elastic as possible, and capable of readjustment and development. Sir Donald Cameron, a year or two ago, re-stating the ideas of Indirect Rule, spoke of the hope of gradually evolving "a more modern form of native constitution." To combine the old and the new, to balance factors of tradition and progress, always and every- where a difficult problem, becomes a vital concern in Nigeria, where such compromise forms- the- very basis of the policy. This country has_ often been 'Failed A mater in the art of blending the past With modern trends : this art will, no doubt, bear fruit also for this, perhaps her most promising, dependency.