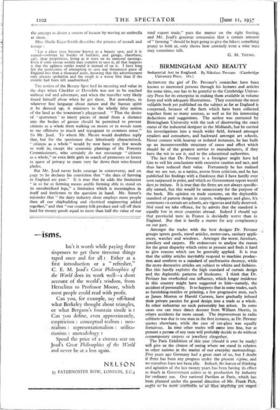 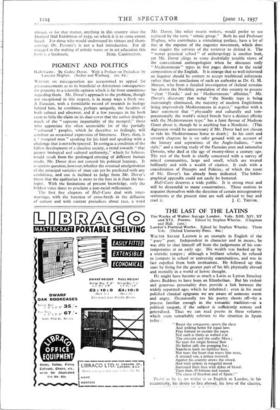 ALTHOUGH the gist of Dr. Pevsnees researches have been known to interested persons through his lectures and articles

for some time, one has to be grateful to the Cambridge Univer- sity Press for its enterprise in making them available in volume form and with adequate illustrations. They constitute the most valUable book yet published on the subject as far as England is concerned, because of the facts which have been collected together from so many sources, as well as for his interesting • deductions and suggestions. The author was entrusted by Birmingham University with the task of discovering the exact status of the industrial designer in the Midlands, but he carried

his investigations into a much wider field, forward amongst retailers and consurners, and backward amongst art schools.

Never content with hearsay or isolated instances, he has built up an incontrovertible structure of cause and effect which should be of the greatest service to manufacturers, if they have the wit to use it, and to the educatiOnal authorities.

The fact that Dr. Pevsner is a foreigner might have led him. to veil his conclusions with excessive caution and tact, and thus have reduced their value. Fortunately he has realised that we are not, as a nation, averse from criticism, and he has .

published his findings 'with a frrinkness that I have hardly ever seen surpassed in print, and which no Government report would

dare.to imitate. It is true that the firms are not always specific- ally named, but this would be unnecessary for the purpose of the book. His opinion on trade customs, on the deplorable standard of pattern design in carpets, wallpapers and glass, his - comments en certain art schools, are vigorous and fully deserved. Nor need we take offence, for he admits that the standard is - equally low in most countries abroad. Indeed I should say that provincial taste in France is decidedly worse than in . England. But that is hardly a matter for any complacency on our part.

Amongst the trades with the best". designs" Dr. Pevsner gronps sports goods, travel articles, motor-cars, sanitary appli- ances, watches and windows. Amongst the worst, furniture, jewellery and carpets. He endeavours to analyse the reason for the great disparity which exists at present and finds it hard to give reasons which can be generally applied. It is true that the utility articles inevitably respond to machine produc- tion and conform to a standard of uftaitrusive -decency, while the,zpore decorative articles are subject to whims and fashions. But .this hardly explains- the high standard of curtain design - and the deplorable patterns of litioleums: I. think that Dr. Pevsner has overlooked one influence, which longer residence in this country might have suggested to hint—namely, the accident of personality. It so happens that in some trades, such - as furnishing-textiles or printing, a few progressive men, such as James Morton or Harold Curwen, have gradually infused their private passion for good design into a trade as a whole. In _other industries no such personality has arisen. In some cases one can trace direct descent from William Morris, in others accidents far more casual. The improvement in radio ' cabinets was due to one man in the first instance, as Dr: Pevsner quotes elsewhere, while the case of -cut-glass was equally fortuitous. In time other trades wiltcome into line, but at present a person of any taste will probably decide to do without • contemporary carpets or jewellery altogether. - The Paris Exhibition of this year (should it ever. be ready) will give us the chance of seeing where we- stand in relation to other nations in the matter of our everyday surroundings. Five years ago Germany had a great start of us, but I doubt if tEtre has been any progress under the present regime, and we ourselves have not been idle. Indeed; the leaven of thinking and agitation of the last twenty years has been having its effect as much in Government action as in production by industry for 'Ordinary use. Our national Pavilion at Paris, which has been planned under the general direction of Mr. Frank Pick, ought -to'be inekt-aetitatile to=tit 1-15ari'irfry" thitit let- staged

abroad, or for that matter, anything in this country since the Dorland Hall Exhibition of 1933, on which it is to some extent based. For those who would understand its virtues and short- comings Dr. Pevsner's is not a bad introduction. For all engaged in the making of artistic wares or in art education this