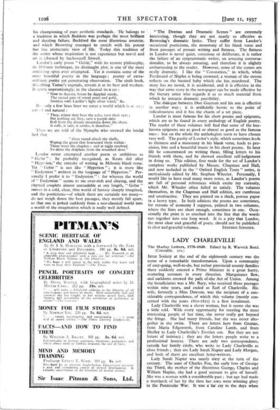 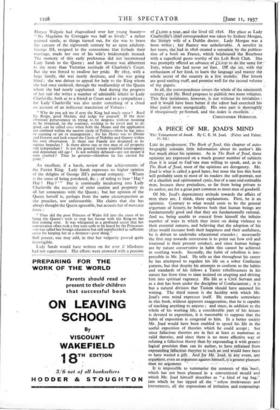 IRISH Society at the end of the eighteenth century was the scene of a remarkable transformation. Upon a community of easy-going, well-to-do, but rather provincial county families there suddenly entered a Prime Minister in a great hurry, scattering coronets in every direction. Marquisates flew, and earldoms strewed the path of-the Act of Union. Among the beneficiaries was a Mr. Bury, 'who received three peerages within nine years, and ended as Earl of Charleville. His wife, formerly a Miss Dawson, was the recipient of a con- siderable correspondence, of which this voltane (mostly con- cerned with the years 1800-1820) is a first instalment.

Lady Charleville was a clever woman, but it seems she was a little odd. With every opportunity for meeting the most interesting people of her time, she never really got beyond the fringe. She had many friends, but she was never alto- gether in the swim. There are letters here from Grattan, from Maria Edgeworth, from Caroline Lamb, and from Shelley to Lady Charleville's Etonian son. But they are not letters Of intimacy ; they are the letters people write to a professional hostess. There are only two ooirespondents, outside her family circle, who write to Lady Charleville as dose friends ; they are Lady Sarah Napier and Lady Morgan, and both of them are excellent letter-writters.

Lady Sarah Napier was nearly sixty at the turn of the century: The aunt of Charles Fox, the early love of George the Third, the mother of the illustrious George, Charles and William Napier, she had a good account to give of herself. She was a woman with a -considerable -past ; but age had made a matriarch of her by the time her -sons were winning glory in the Peninsular War. It was a far cry to the days when Horace Walpole had rhapsodised over her young beauty- " No Magdalen by Correggio was half so lovely," a rather pointed simile, as things turned out, for she was to brave the censure of the eighteenth century by an open adultery. George III, resigned to the conventions that forbade their marriage, made her one of his wife's bridesmaids instead. The memory of " this early preferenCe did not --recommend Lady Sarah tO the Queen ; and her 'divorce was abhorrent to the more than Victorian rectitude of Charlotte's Court.

But she was forced to -swallow her pride. BY 1805, with a large family, she was nearly destitute, and she was going blind ; she was driven to appeal for help to the King whom she had once-enslaired, through the mediumihip Of the Queen whom she had nearly 'supplanted. --And during the progress of her 'suit- she-writes a number of 'admirable- letteri- tO. Lady Charleville, both ai to a friend at Court and to a sympathiser; for Lady' Charleville -was also under something of .a cloud on account of an indiscreet translation of Voltaire : "Why do you ask me if ever the King had much sense ? Read his Reign,'good 'Madam, and judge for yourself. If the Most obstinate perseverance in trying to ,be despotic without meaning to be tirranical, on the contrary, wishing to be loved and to do good, can be called sense when both the Means and the application are confined within the narrow -circle of Politics—then he has sense or cunning or art or management ;- for his Motto was to Divide and Govern and look round the Circle of Nobility and Gentry within his -own observation. Is there one Family not disunited in its various .branches,? Is_ there above one or two men of old property still independaht? Is not the general system .youthful extravagance and dependant old age ? Is not nobility debased—are not money'd men courted ? Thus he governs—therefore he has carried his point."

An excellent, if a harsh, review of the achievements of the Patriot King. Lady Sarah expresses no higher opinion of the delights of George III's personal company. "Where is the sense of being powdered, &c. ; of riding to hear ' Hay ?

Hay ? Hay ? ' " She is continually inculcating into Lady Charleville the necessity of strict caution and propriety in all her connexions with the Queen ; but her opinion of the Queen herself -is, perhaps from the same circumspection as she preaches, not unfavourable. She claims that she has always thought the Queen agreeable, but accuses her of mauvaise honte : "Thus did the poor Princess of Wales fell into the snare of its being the Queen's wish to stop her favour with the King on her first coming over. It was whispered as a profound secret that her conversation often took a free turn unfit to be heard by the Princesses —it was called her foreign education but still reprehended as sufficient cause for keeping her at a distance—poor thing." .

Still poorer, one may add, in that her vulgarity proved quite incorrigible.

Lady Sarah would have written on for ever if blindness had not supervened. Her efforts were crowned with a pensicin of Luctoo a yeatoUid she lived till 1826. Her place as Lady Char1ei414'i chief dirrespondent was taken by Sydney Morgan, the'literary wife of a Dublin doctor. Lady Morgan was a born writer ; , her fluency was unbelievable. ..A novelist in her teens, she _had in 1816 created a sensation., by the tion of a book On France, whicli belabiiired the Bourbons with a superficial gusto worthy of the, Left Book Club. She was promptly offered an advance Of ;o to to. do: the same for' Italy, where she had never set-fOot.. Off she set; with the enthusiasm. of her kind, to learn the language and mister the whole Secret Of the country in 'a -IfeW, months': Her letterS are good rattling stuff, and promise well forthe Second volume of the papers.

In all; the correspondence covers the whole of the nineteenth century, and Mr. Bond proposes to publish two more volUtnes. This 'first iñstlhint, however, 'is not WithOut.Its trivialities: and' it *Would hive -been better if the editor had exercised his blue-pencil more energetically. His own part" is thoroughly if obseciuiously _perlortned, -and the index is 'excellent.