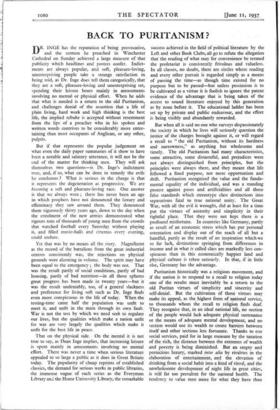 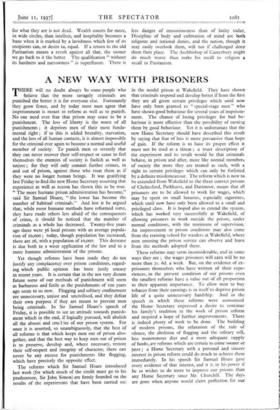 DR. INGE has the reputation of being provocative, and the sermon he preached in Winchester Cathedral on Sunday achieved a large measure of that publicity which headlines and posters confer. Indict- ments are always popular, and soft, pleasure-loving, unenterprising people take a strange satisfaction in being told, as Dr. Inge does- tell them categorically, that they are a soft, pleasure-loving and unenterprising set, spending their leisure hours mainly in amusements involving no mental or physical effort. When he adds that what is needed is a return to the old Puritanism, and challenges denial of the assertion that a life of plain living, hard work and high thinking is the best life, the implied rebuke is accepted without resentment from the lips of a preacher who in his spoken and written words contrives to be considerably more enter- taining than most occupants of Anglican, or any other, pulpits.

But if that represents the popular judgement on what even the daily paper summaries of it show to have been a notable and salutary utterance, it will not be the end of the matter for thinking men. They will ask themselves two questions—is Dr. Inge's indictment true, and, if so, what can be done to remedy the evils, he condemns ? What is serious in the charge is that it represents the degeneration as progressive. We are becoming a soft and pleasure-loving race. One answer is that we always were ; there has never been an age in which prophets have not denounced the luxury and effeminacy they saw around them. They denounced them vigorously thirty years ago, down to the day when the enrolment of the new armies demonstrated what rigours tens of thousands of young men from the crowds' that watched football every Saturday without playing it, and filled music-halls and cinemas every evening, could endure.

Yet that was by no means all the story. Magnificent as the record of the battalions from the great industrial centres consistently was, the rejectiOns on physical grounds were alarming in volume. The spirit may have been equal to the emergency ; the body was not. That was the result partly of social conditions, partly of bad housing, partly of bad nutrition—in all those spheres great progress has been made in twenty years—but it was the result undeniably, too, of a general slackness and preference for living soft such as Dr. Inge finds'. even more conspicuous in the life of today. When the testing-time came half the population was unfit to meet it, and unfit in the main through its -own fault. War is not the test by which we need seek to regulate our lives, but the qualities which make a nation unfit for war are very largely the qualities which make it unfit for the best life in peace.

That on the physical side. On the mental it is not true to say, as Dean Inge implies, that increasing leisure is spent mainly in amusements involving no mental effort. There was never a time when serious literature appealed to so large a public as it does in "Great Britain , today. The popularity .of cheap reprints of established classics, the demand for serious works in public libraries, the immense vogue of such series as the _ Everyman Library anel the Home University Library, the remarkable success achieved in the field of political literature by the Left and other Book Clubs, all go to refute the allegation that the reading of what may for convenience be termed - the proletariat is consistently frivolous and valueless. ' In all classes, no doubt, there are circles where reading and every other pursuit is regarded simply as a means of passing the time—as though time existed for no purpose but to be passed—but unless pessimism is to be cultivated as a virtue it is foolish to ignore the patent • evidence of the advantage that is being taken of the access to sound literature enjoyed by this generation as by none before it. The educational ladder has been set up by private and public endeavour, and the effOrt is being visibly and abundantly rewarded.

But when all is said no one who surveys dispassionately the society in which he lives will seriously question the justice of the charges brought against it, or will regard a recall to "the old Puritanism, without its hardness and narrowness," as anything but wholesome and timely. The old Puritanism had many characteristics, some attractive, some distasteful, and prejudices were not always distinguished from ,principles, but the principles were always there, and they meant that life followed a fixed purpose, not mere opportunism and' drift. Puritanism recognised the value and the funda- mental 'equality of the individual, and was a standing protest against poses and artificialities and' all those false standards which stereotype class distinctions into separatisms fatal to true national unity. The Great War, with all the evil it wrought, did at least for a time put the virtues of austerity and simplicity' in their rightful place. That they were not kept there is a profound misfortune. In countries like Germany, paftly as result Of an economic stress which has put, personal ostentation and display out of the reach of all but a handful, partly as the result, of an inspiration which we so far lack, distinctions springing from differences in income and in what is called Class are markedly less con- spicuous than in this economically happier land and physical culture is taken seriously. In that, if in little else, Germany has the advantage.

Puritanism historically .was a religious movement, and if the nation is to respond to a recall to religion today one of the results must inevitably be a return to the old puritan virtues of simplicity and sincerity and self-denial. But the cultivation of those virtues may make its appeal, as the highest form of national service, to thousands whom the, recall to religion finds deaf. They recognise that, , in an ideal national life,, no section of the people would lack adequate physical sustenance or the means of adequate mental development, and no section wOuld use its wealth to create barriers between itself and other Sections less fortunate. Thinks to our social services, paid for in large meanie by the taxation of the rich, the distance between the extremes of wealth and poverty is being diminished But an empty and pernicious luxury, marked inter alia by rivalries in the elaboration of entertainment, and the elevation of drinking from a social habit into a kind of ritual, and the unwholesome development of night life in great cities, is Still far too prevalent for the national health. The tendency to value then more for what they have than for what they are is not dead. Wealth counts for more, in wide circles, than intellect, and hospitality becom bane when it is marked by a lavishness which few of its recipients can, or desire to, equal. If a return to the old Puritanism means a revolt against all that, the sooner we go back to it the better. The qualification "without its hardness and narrowness" is superfluous. There is less danger of censoriousness than of laxity today. Discipline of body and cultivation of mind are both religious and national duties, and the nation, though it may easily overlook them, will not if challenged deny them their place. The Archbishop of Canterbury might do much worse than make his recall to religion a recall to Puritanism.