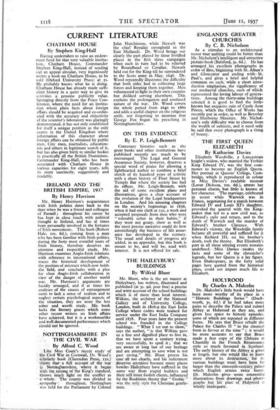 Elizabeth Woodville, a Lancastrian knight's widow, who married the Yorkist King Edward IV, was the first com- moner to become an English Queen. Her portrait at Queens' College, Cam- bridge, which is reproduced in colour in Miss Daviei's- readable memoir (Lovat Dickson, Jos. 6d.), attests her personal charm, but little is known of her character. The marriage, celebrated in secret while Warwick was in France, negotiating for a match between Edward IV and Louis XI's daughter, provoked the quarrel with the King- maker that led to a new civil war, to Edward's exile and return and to the death of Warwick and the murder of Edward's brother Clarence. With -Edward's victory, the Woodville family be6ame all powerful -and suffered for it when Richard III; on his brother's death, took the throne. But Elizabeth's part in all these stirring events remains undefined -Miss Davies --reakes the facts and some of the chronicler's legends, but her Queen Is. a lay figure. Even Shakespeare, in the forty solid pages here quoted from the historical plays, could not impart much life to Elizabeth.