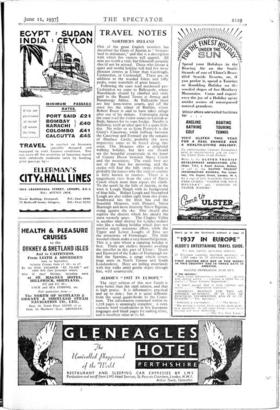 ONE of the great English novelists has described the Glens of Antrim as " Switzer- land in miniature," and that is a description with which few visitors will quarrel. All nine are worth a visit, but Glenariff certainly should not be missed. Those who favour a qukt and restful holiday will find few more pleasant centres in Ulster than Carnlough, Cushendun, or Cushendall. There are, in addition to the wooded Glens and lofty peaks, some waterfalls of great beauty. Following the coast road northward past Cushendun we come to Ballycastle, where Knocklayde should he climbed and visits paid to the Round Tower at Armog and 113unamargy Abbey. At Ballycastle there are fine lawn-tennis courts, and off the coast lies the island of Rathlin, where Robert Bruce is said to have taken refuge after one of his defeats. Continuing along the coast road the visitor comes to Carrick-a- Rede, famous for its rope bridge. Nearby is Ballintoy, itself an ideal spot for a quiet holi- day. Six miles or so from Portrush is the Giant's Causeway, while halfway between the Causeway and Portrush are the remains of Dtmluce Castle, probably the most impressive ruins to be found along this coast. The Mournes offer a delightful walking holiday, but first one should see the beautiful countryside in the heart of County Down between Slieve Croob and the mountains. The roads here are not of the best for motoring, and the cyclist will find the hills steep, which is probably the reason why this strip of country is little known to tourists. There is a magnificent view from the crest of Slieve Croob which more than repays the climb. To the north lie the hills of Antrim, in the west is Lough Neagh with its background of blue hills. Belfast Lough and Strangford Lough are also within sight from this point. Southward lies the Irish Sea and the beautiful Mournes, with Donard, Slieve Bearnagh and more distantly Slieve Bignian, rising against the sky. One should also explore the district which lies amidst the most westerly spurs. -The Clogher Valley is another ideal district for holiday-makers who like a walking holiday which does not involve. much strenuous effort, while the Upper and Lower Loughs of Erne are the attractions of 'Fermanagh. The little wooded islands make a very beautiful picture. This is a spot where a camping holiday is best. There are endless beauties awaiting the traveller in this part of Ulster : - North and Eastward of the Lakes of Fermanagh we find the Sperrins, a range which covers large areas in North .Tyrone and South Londonderry. Here are rolling moorlands with fine walks amid gentle slopes through fine, wild countryside. -

The 1937 edition of this new Guide is even better than the 1936 edition, and that is high praise. It is informative, practical and up to date ; but it is quite different from the usual guide-books to the Conti- nent. The information contained within its 1,228 pages is amazingly complete : it even contains brief vocabularies in five European languages and blank pages for making notes, and is excellent value at 7s. 6d.