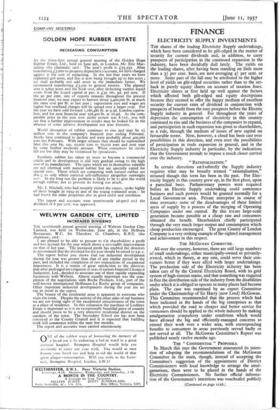 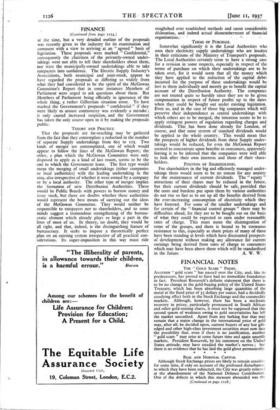 THE shares of the leading Electricity Supply undertakings, which have been considered to be gilt-edged in the matter of security for current dividends and, in addition, to carry prospects of participation in the continued expansion in the industry, have been decidedly dull lately. The yields on the leading shares, after having been standing on little more than a 31 per cent. basis, are now averaging 41: per cent. or more. Some part of the fall may be attributed to the higher level of yields on gilt-edged securities rather than to the set- back in purely equity shares on account of taxation fears. Electricity shares at first held up well against the factors which -affected both gilt-edged and equity descriptions because they seemed to offer the happy medium of excellent security for current rates of dividend in conjunction with prospects of benefit from the rosy prospects before the Electric Supply industry in general. For throughout the years of depression the consumption of electricity in this country continued to rise and the business of the companies to expand, and participation in such expansion was given to shareholders, as a rule, through- the medium of issues of new capital on favourable terms. Now, however, a cloud has been cast over possibilities in this direction, and even over the possibilities of participation in trade expansion in general, and in the Electricity Supply industry in particular, by the indications that the Government intends to impose a much closer control over the industry.

In certain directions unioubtedly the Supply industry requires what may be broadly termed "rationalisation," misused though this term has been in the past. For Elec- tricity Supply in this country grew up, in the first place, upon a parochial basis. Parliamentary powers were required before an Electric Supply undertaking could commence business and such powers would be granted normally for a Local Govemmtnt area. Private enterprise in course of time overcame some of the disadvantages of these limited areas Of supply by a process of the merging of Operating Companies under one control. By this items large-scale generation became possible at a cheap rate and consumers obtained the benefit. Shareholders chiefly participated through the very much larger output and consumption which cheap production encouraged; The great County of London Company is a very striking example of far-sighted management and achievement in this respect.

All over the country, however, there are still large numbers of small undertakings, either municipally-owned or privately- owned, Which in theory, at any rate, could serve their con- sumers better if they were allied with larger undertakings. The production side of the Electricity industry has been taken care of by the Central Electricity Board, with its grid system of high-tension mains, and that something was required to free the distribution side of the industry from the disabilities under which it is obliged to operate inmany places had become plain. The case was examined by an expert Committee under the Chairmanship of Sir Harry (now Lord) McGowan. This Committee recommended that the process which had been indicated in the hands of the big enterprises as that which provided the road to cheaper and better service for consumers should be applied to the whole industry by making amalgamation compulsory under conditions which would have allowed the big and efficiently-managed concerns to extend their work over a wider area, with corresponding benefits to 'consumers in areas previously served badly or not served at all. The McGowan Committee's Report was published nearly twelve months ago.

In March this year. the Government innounced its inten- tion of adopting the recommendations of the McGowan Committee in the main, though, instead of accepting the Committee's suggestion of the appointment of District Commissioners with local knowledge to arrange the amal- gamations, these were to be placed in the hands of the Electricity Commissioners. No further official informa- tion of the Government's intentions was vouchsafed publicly (Continued on page 1126.)

(Continued from Page 1124.) at the time, but a very detailed outline of the proposals was recently given to the industry for its examination and comment with a view to arriving at an " agreed " basis of legislation. These proposals were marked "Confidential," consequently the chairmen of the privately-owned under- takings were not able to tell their shareholders about them, nor were the municipally-owned undertakings able to take ratepayers into confidence. The Electric Supply Industry's Associations, both municipal and joint-stock, appear to have regarded the proposals as differing so widely from what they had -considered to be the spirit of the McGowan Committee's Report that in some instances Members of Parliament were urged to ask questions about them. But Members of Parliament being officially in ignorance of the whole thing, a rather Gilbertian situation arose. To have marked the Government's proposals " confidential " if they Were likely to arouse controversy was evidently a mistake ; it only caused increased suspicion, and the Government has taken the only course open to it by making the proposals public.

That the proposals are far-reaching may be gathered from the fact that they contemplate a reduction in the number of separate Supply undertakings from 6o5 to 123. Two kinds of merger are contemplated, one of which would appear to follow the lines of the McGowan Report; the other, a plan which the McGowan Committee were only disposed to apply as a kind of last resort, seems to be the one to which the Government leans. The first type would mean the merging of small undertakings (either companies or local authorities) with the leading undertaking in the area, also irrespective of whether it were owned by a company or by a local authority. The other type of merger implies the formation of new Distribution Authorities. These would be Public Boards with powers to borrow money and issue stock, but there are doubts whether these authorities would represent the best means of carrying out the ideas of The McGowan Committee. They would neither be responsible to ratepayers nor to shareholders, and to some minds suggest a tremendous strengthening of the bureau- cratic element which already plays so large a part in the lives of most of us. In theory, no doubt, they would be all right, and that, indeed, is the distinguishing feature of bureaucracy. It seeks to impose a theoretically perfect plan on an existing system irrespective of all practical con- siderations. Its super-imposition in this way must ride roughshod over established methods and cause considerable dislocation, and indeed actual dismemberment of financial organisations. - TERMS OF PURCHASE.

Somewhat significantly it is the Local Authorities who own their electricity supply undertakings who are loudest in their criticisms of the Ministry of Transport's proposals. The Local Authorities' Certainly seem to have a strong case for a revision in some respects, especially in respect of the terms of purchase on which their undertakings -are to be taken over, for it would seem that all the money which they have applied to the reduction of the capital debts incurred for the purpose of these undertakings would be lost to them individually and merely go to benefit the capital account of the Distribution Authority. The companies are not treated quite so harshly since they are to be given compensation in respect of future profits up to the dates when they could be bought out under existing legislation. Even so, and in the case of those big companieswhich will preserve their independence as central undertakings with which others are to be merged, the intention seems to be to apply stringent powers of regulation regarding charges and dividends. - This has been done already for London, of course, and that same system of standard dividends would be applied to the whole country. This would mean that the prospects of higher dividends from these Supply under- takings would be reduced, for even, the McGowan Report seemed to concentrate upon benefits to consumers, apparently leaving it to be inferred that the companies were well able to look after their own interests and those of their share- holders. POSITION OF SHAREHOLDERS.

For shareholders in the big and efficiently managed under- takings there would seem to be no reason for any anxiety for the maintenance of current dividends. The "equity" attractions of their _shares may be reduced in the future, but their current dividends should be safe, provided that the costs and burdens put upon them by various authorities do not rise so fast as to eat up all the benefits derived from the ever-increasing consumption of electricity which they have fostered. For some of the smaller undertakings and for certain of the "financial control groups" there may be difficulties ahead, for they are to be bought out on the basis of what they could be expected to earn under reasonable rates of charge. This must mean the disintegration' of some of the groups, and there is bound to be strenuous resistance to this, especially as share prices of many of these have been standing at levels which have discounted prospects of development without making any allowance for" current earnings being derived from rates of charge to consumers which may have been above those which will be standardised