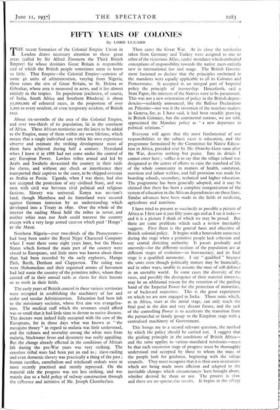 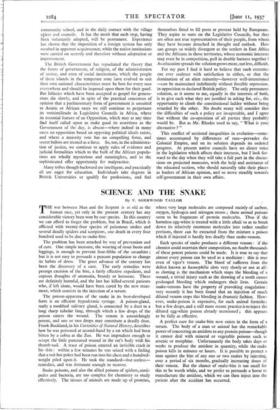 By LORD LUGARD About six-sevenths of the area of this Colonial Empire, and over two-thirds of its population, lie in the continent of Africa. These African territories are the latest to be added to the Empire, many of them within my own lifetime, which means that a single individual can within his own experience observe and estimate the striking development most of them have achieved during half a century. Nyasaland when I knew it in 1888 had not come under the control of any European. Power. Lawless tribes armed and led by Arabs and Swahelis devastated the country in their raids for slaves, and without any check or interference they transported their captives to the coast, to be shipped overseas to Arabia or Persia. Uganda, when I was there, had also not accepted the protection of any civilised State, and was torn with civil war between rival political and religious factions. Slavery was universal. Kenya was no-man's land, though Mombasa and its hinterland were secured against German intrusion by an understanding which developed into a Treaty in 1890. Over the whole of the interior the raiding Masai held the tribes in terror, and neither white man nor Arab could traverse the country except with a very large armed caravan which paid Hongo ' to the Masai.

Northern Nigeria—over two-thirds of the Protectorate— had long been under the Royal Niger Chartered Company when I went there some eight years later, but the Hausa States which formed the main part of the country were closed to Europeans, and little more was known about them than had been recorded by the early explorers, Mungo Park, Barth, Denham and Clapperton. The ruling race were Mahomedans and their organised armies of horsemen had laid waste the country of the primitive tribes, whom they carried off in their annual raids as slaves for their harems or to work in their fields.

The early years of British control in these various territories were occupied in establishing the machinery of law and order and secular Administration. Education had been left to the missionary societies, whose first aim was evangelisa- tion. The medical staff which the revenues could afford was so small that it had little time to devote to native diseases. The doctors were indeed fully occupied with the care of the Europeans, for in those days what was known as "the mosquito theory" in regard to malaria was little understood, and the sickness and mortality among the white men from malaria, blackwater fever and dysentery was really appalling. But the change already effected in the conditions of African life during the pre-War years was very striking. The ceaseless tribal wars had been put an end to ; slave-raiding and even domestic slavery was practically a thing of the past ; human sacrifice, cannibalism and witchcraft ordeals were at most secretly practised and sternly repressed. On the material side the progress was not less striking, and was mainly due to a bold policy of railway construction through the influence and initiative of Mr. Joseph Chamberlain. . Then cam: the Great War. At its close the territories taken from Germany and Turkey were assigned to one or other of the victorious Allies, under mandates which embodied conceptions of responsibility towards the native races entirely new to international law and usage. The British Govern- ment hastened to declare that the principles enshrined in the mandates were equally applicable to all its Colonies and Protectorates. It accepted gs an integral part of Imperial policy the principle of trusteeship. Henceforth, said a State Paper, the interests of the Natives were to be paramount. This was not a new orientation of policy in the British depen- dencies—suddenly announced, like the Balfour Declaration on Palestine—nor was it the invention of the mandate-makers in Geneva, for, as I have said, it had been steadily growing in British Colonies, but the continental nations, we are told, appreciated the Mandate policy as "a new departure in political relations."

Everyone will agree that the most fundamental of our responsibilities to the subject races is education, and the programme formulated by the Committee for Native Educa- tion in Africa, presided over by Mr. Ormsby-Gore soon after the War, deserves nothing but praise. Into its details I cannot enter here ; suffice it to say that the village school was designated as the centre of efforts to raise the standard of life of the whole community in matters of health, sanitation, nutrition and infant welfare, and full provision was made for boarding schools, secondary, technical and higher education. The programme has been generally adopted, and it may be claimed that there has been a complete reorganisation of the system of education in the African dependencies on these lines. Similar advances have been made in the fields of medicine, agriculture and nutrition.

I have tried to present as succinctly as possible a picture of Africa as I first saw it just fifty years ago and as I see it today— and it is a picture I think of which we may be proud. But there are some problems which such a review inevitably suggests. First there is the general basis and objective of British colonial policy. It begins with a benevolent autocracy during the stage when a primitive people lack cohesion and any central directing authority. It passes gradually and unevenly—for the different sections of the population are at different stages of evolution—to bureaucracy, and its final stage is a qualified autonomy. I say " qualified " because the units even though politically mature may be financially, and in other ways, unable to assume the onus of self-defence in an unstable world. In some cases the diversity of the races, and possibly the divergence of their material interests, may be an additional reason for the retention of the guiding hand of the Imperial Power for the protection of minorities, or of backward majorities. This is the great experiment on which we are now engaged in India. Those units which, as in Africa, start at the initial stage, can only reach the final goal in the dim and very distant future, and the task of the controlling Power is to accelerate the transition from the patriarchal or family group to the Kingdom stage with a centralised machinery of Government.

This brings me to a second relevant question, the method by which the policy should be carried out. I suggest that the guiding principle in the conditions of British Africa— and the same applies to various mandated territories—must be that each successive stage of progress must be thoroughly understood and accepted by those to whom the mass of the people look for guidance, beginning with the village councils. They must recognise that it is their own institutions which are being made more efficient and adapted to the inevitable changes which circumstances have brought about, whether desired by them or not. The process is slow and there are no spectacular results. It begins in the village community school, and in the daily contact with the village elders and councils. It has the merit that each step, having been voluntarily adopted, will be permanent. Experience has shown that the imposition of a foreign system has only resulted in apparent acquiescence, while the native institutions were carried on secretly and therefore without adaptation or improvement.

The British Government has repudiated the theory that the forms of government, of religion, of the administration of justice, and even of social institutions, which the people of these islands in the temperate zone have evolved to suit their own national characteristics must be best for every race everywhere and should be imposed upon them for their good. But fallacies which have been accepted as gospel for genera- tions die slowly, and in spite of the practical consensus of opinion that a parliamentary form of government is unsuited to Asiatic or African races we still continue to perpetuate its verisimilitude in Legislative Councils in Africa, where its essential feature of an Opposition, which may at any time find itself called upon to make good its assertions as the Government of the day, is absent—where indeed in many cases no opposition based on opposing political ideals exists, and where a majority vote has no compelling force, and secret ballots are treated as a farce. So, too, in the administra- tion of justice, we continue to apply rules of evidence and judicial formalities which to the bulk of the African popula- tions are wholly mysterious and meaningless, and to the sophisticated offer opportunity for malpractice.

Many tribes though backward are intelligent, and practically all are eager for education. Individuals take degrees in British Universities or qualify for professions, and feel themselves fitted to fill posts at present held by Europeans. They aspire to seats on the Legislative Councils, but they are often not true representatives of their people, from whom they have become detached in thought and outlook. How can groups so widely divergent as the settlers in East Africa and the Africans in those territories, whose economic interests may even be in competition, pull in double harness together ? As education spreads the solution grows more, not less, difficult.

For my part I find it hard to believe that such extremes can ever coalesce with satisfaction to either, or that the domination of an alien minority—however well-intentioned —can be maintained indefinitely without forcible repression, in opposition to declared British policy. The only permanent solution, as it seems to me, equally in the interests of both, is to give each what they are justified in asking for, viz., the opportunity to climb the constitutional ladder without being retarded by the other. No doubt many will consider that the difficulties of such a policy are insuperable, and I agree that without the co-operation of all parties they probably would be. But as Mr. Rhodes used to say, "What is your alternative ? "

This conflict of sectional inequalities in evolution—some- times accentuated by differences of race—pervades the Colonial Empire, and on its solution depends its ordered progress. At present native councils have no direct voice in the legislation which affects their interests, but I look for- ward to the day when they will take a full part in the discus- sions on projected measures, with the help and assistance of the educated section, who should naturally take their places as leaders of African opinion, and -so move steadily towards self-government in their own affairs.