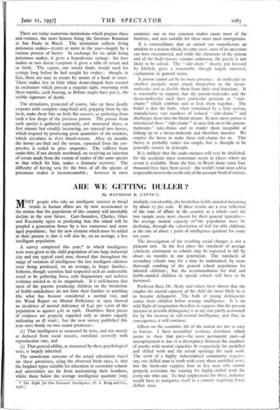 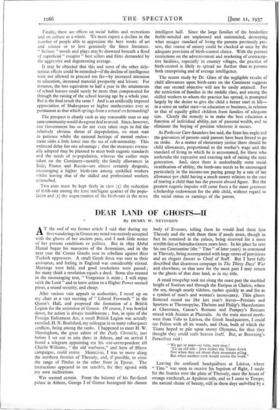 ARE WE GETTING DULLER?

By RAYMOND B. CATTELL

MOST people who take an intelligent interest in broad trends in human affairs are by now accustomed to the notion that the population of this country will inevitably decline in the near future. Carr-Saunders, Charles, Glass and Kuczinsky agree in predicting that this island will be peopled g generation hence by a less numerous and more aged population; but the new element which must be added to their picture is that it will also be, on an average, a less intelligent population.

A. survey completed this year,* in which intelligence tests were given to the child population of one large industrial city and one typical rural area, showed that throughout the range of variation of intelligence the less intelligent children were being produced, on an average, in larger families; hitherto, though scientists had suspected such an undesirable trend to be gathering force, only fragmentary and indirect evidence existed as to its magnitude. It is well-known that most of the parents producing children on the borderline of feeble-mindedness do not limit their families to anything like what has become considered a normal size, and the Wood Report on Mental Deficiency in 1929 showed an incidence of mental deficiency of 841 per ',coo of the population as against 4.61 in 1906. Doubtless these pieces of evidence are properly regarded only as straws vaguely indicating an ill wind ; but the new survey published this year rests firmly on two sound premisses (1) That intelligence as measured by tests, and not merely as deduced from social success, correlates inversely with reproduction rate, and (2) That general ability, as measured by these psychological tests, is largely inherited.

The unwelcome outcome of the actual calculation based on these premisses, using the observed birth rates, is that the brighter types suitable for education in secondary schools and universities are far from maintaining their numbers, whilst those below the average intelligence quotient (i00)

multiply considerably, the borderline feeble-minded increasing by about 25 per cent. If these results are a true reflection of the state of affairs in the country as a whole—and the two sample areas were chosen for their general typicality— the average mental capacity of*the population must be declining, through the substitution of dull for able children, at the rate of about I point of intelligence quotient for every ten years.

The investigation of the resulting social changes is not a pleasant task. In the first place the standards of average scholastic attainment in schools may be expected to fall by about six months in one generation. The standards of secondary schools may for a time be maintained, by more thorough combing of the general school population for talented children ; but the accommodation for dull and feeble-minded children in special schools will have to be increased.

Professor Burt, Dr. Healy and others have shown that the smaller the mental capacity of the child the more likely he is to become delinquent. The bulk of young delinquents comes from children below average intelligence. It is no wild flight of imagination therefore to suppose that the present increase in juvenile delinquency is at any rate partly accounted for by the increase in sub-normal intelligence, and that, in consequence, it will continue.

Effects on the economic life of the nation are not so easy to foresee. I have assembled evidence elsewhere which seems to show that part—the more permanent part—of unemployment is due to a discrepancy between the numbers of youths with mental capacities fit respectively for unskilled and skilled work and the actual openings for such work. The work of a highly industrialised community requires, say, one skilled man to work with every three unskilled men ; but the birth-rate supplies four or five men who cannot properly assimilate the training for highly-skilled work for every one who can. To find employment for these, industry would have to reorganise itself in a manner requiring fewer skilled men. Finally, there are effects on social habits and recreations and on culture as a whole. We must expect a decline in the number of people able to appreciate the best works of art and science or to love genuinely the finest literature. "Serious " novels and plays may be drowned beneath a flood of superficial" escapist" best sellers and films demanded by the aggressive and degenerating average.

It may be objected that this and most of the other dele- terious effects could be remedied—if the decline of intelligence were not allowed to proceed too far—by increased attention to education, increased material prosperity and leisure. For instance, the loss equivalent to half a year in the attainments of school leavers could surely be more than compensated for through the raising of the school leaving age by a whole year. But is the final result the same ? And is an artificially imposed appreciation of Shakespeare or higher mathematics ever as permanent as that which springs from a natural understanding?

The prospect is clearly such as any reasonable man or any sane community would do a great deal to avoid. Since, however, our Government has so far not even taken steps to foil the relatively obvious threat of depopulation, we must wait in patience whilst the national heritage of mental endow- ment sinks a little lower into the sea of sub-normality. This enforced delay has one advantage ; that the measures eventu- ally adopted may be planned to meet both eugenic standards ard the needs of re-population, whereas the earlier steps taken on the Continent—notably the family allowances in Italy, France and Russia—are almost certainly dysgenic, encouraging a higher birth-rate among unskilled workers whilst leaving that of the skilled- and professional workers untouched.

Two aims must be kept fairly in view (t) the reduction of birth-rate among the least intelligent quarter of the popu- lation and (2) the augmentation of the birth-rate in the m3re intelligent half. Since the large families of the borderline feeble-minded are unplanned and unintended,., destroying what meagre standard of living the parents previously pos- sess, this source of misery could be checked at once by the adequate provision of birth-control clinics. With the present restrictions on the advertisement and marketing of contracep- tive facilities, especially in country villages, the practice of birth-control is likely to spread no further than to persons both enterprising and of average intelligence.

The recent study by Dr. Glass of-the negligible results of child allowances upon birth-rates on the Continent suggests that our second objective will- not be easily attained. -. For the restriction of families in the middle class, and among the skilled workers to whom the practice has spread, is prompted largely by the desire to give the child a better start in life— in a sense an unfair start—in education or business, in relation to that of equally gifted children from families of adequate size. Clearly the remedy is to make the best education a function of individual ability, not of parental wealth, and to eliminate the buying of position wherever it occurs.

As Professor Carr-Saunders has said, the State has neglected the grievances of parents until parents have been forced to go on strike. As a matter of elementary justice there should be child allowances, proportional to the worker's wage and the standard of living to which he is accustomed, for those who undertake the expensive and exacting task of raising the next generation. And, since there is undoubtedly some social stratification of ability, the birth-rate needs to be encouraged particularly in the income-tax paying group by a rate of tax allowance per child having a much nearer relation to the cost of rearing a child than has the present absurd figure. But the greatest eugenic impulse will come from a fai more generous scholarship endowment for the able child, without regard to the social status or earnings of the parent,