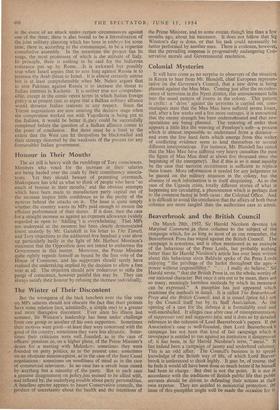 Honour in Their Mouths

The air still is heavy with the rumblings of Tory consciences. Members who voted for the increase in their salaries are being hauled over the coals by their constituency associa- ons. Yet they should beware of protesting overmuch. hakespeare has told us what to think of people who have 'so uch of honour in their mouths,' and the obvious attempts hich have been made to manufacture party capital out of the increase inspire little confidence as to the purity of the motives behind the attacks on it. The issue is quite simply whether the country wants its MPs paid enough to ensure the efficient performance of their duties. if it does, then the case for a straight increase as against an expenses allowance (widely regarded as open to ' fiddling ') is overwhelming. That MPs are underpaid at the moment has been clearly , demonstrated insist recently by Mr. Gaitskell in his letter to The Times), nd Tory objections to the additional five hundred a year show p particularly badly in the light of Mr. Herbert Morrison's statement that the Opposition does not intend to embarrass the Government in this matter. Moreover, the Prime Minister quite rightly regards himself as bound by the free vote of the House of Commons, and his supporters should surely have realised the undertaking implied by the decision to allow a free vote at all. The objectors should now endeavour to stifle the pangs of conscience, however painful this may be. They can always satisfy their honour by refusing the increase individually.