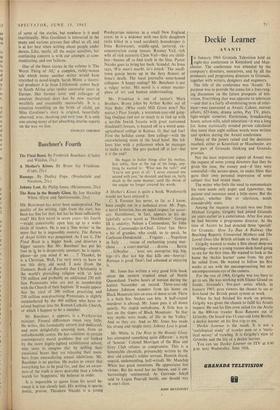 MR. BUECHNER has never been underpraised. The quality of his writing, right from the start, has

been too fine for that; but has he been sufficiently read? His first novel in seven years—his fourth —might conceivably open him up to a wider circle of readers. He is not a 'fine writer' in the sense that he is impossibly esoteric. The Return of Angel Gibbs was penguined. As I see it, The Final Beast is a bigger book, and deserves a bigger success. But Mr. Buechnd has put his foot in it; he is desperately unsmart; he is (quiet, please—do you mind if we . . .? Thanks), he is a Christian. Well, I'm very sorry to have to use this dirty old word. I note (from the Guinness Book of Records) that Christianity is the world's prevailing religion with 'at least 750 million and probably an additional 250 mil- lion Protestants who are not in membership with the Church of their baptism.' It would appear that the total of 200 million practising and 250 million non-practising Protestants is slightly outnumbered by the 460 million who have re- ceived baptism into the Roman Catholic Church, of which I happen to be a member.

Mr. Buechner, it appears, is a Presbyterian minister. Formal differences mean very little. He writes, this formidably austere and dedicated, and most delightfully amusing man, from an unfashionable centre. He has solutions to certain contemporary moral problems that are funked by the more highly-lighted exhibitionist school, who seem to imagine that by spilling their emotional beans they are releasing their mem- bers from emasculating sexual inhibitions. Mr. Buechner is no puritan. He makes us aware that everything has to be paid for, and that an aware- ness of the truth is more desirable than a febrile search for 'happiness.' He believes in order.

It is impossible to quote from his novel be- cause it is too closely knit. His writing is sparse, poetic, precise. Theodore Nicolet is a young Presbyterian minister in a small New England town; he is a widower with two little daughters (wife killed in a road accident); housekeeper is Irma Reinwasser, middle-aged, tortured, ex- concentration camp inmate. Rooney Vail, rich wife of rich eccentric Clem Vail—they are child- less—buzzes off to find truth in the blue. Pastor Nicolet goes to bring her back. Scandal. As Irma says, 'Nile man's macht, ist's falsch.' The small- town gossip burns up in the fiery flowers of Irma's death. The local journalist smut-hound collapses. A happy ending? Mr. Buechner is not a vulgar writer. His novel is a minor master- piece of wit and human understanding.

Mr. Friedman is one of nature's Marx Brothers. Bronx jokes by Arthur Kober out of Nize Baby. (Who reads Milt Gross now? No matter.) Poor Joseph, a seventeen-year-old gang- ' ling Oedipus tied not so much to as tied up with a terrible Jewish Jocasta with great suntanned (freckled?) breasts, is buzzed off to a weird semi- agricultural college in Kansas. 0, that sad Joel First the holiday camp; then college—with the overwhelming mum in the local hotel. She fol- lows him with a policeman when he manages to make a date. She gets packed off at last—but is it the end?

He began to holler things after his mother, first softly, then at the top of his lungs, any- thing he wanted to: 'What was the rush?' and 'You're not great at all.' I never enjoyed one second with you,' he shouted, and kept on, fairly much in the same manner, until the shriek of the engine no longer covered his words.

A Mother's Kisses is quite a book. Wordsworth would not have enjoyed it.

C. S. Forester has never, so far as I know, been caught out in a technical error. Mr. Pope, a naval historian, has an equal respect for accur- acy. Hornblower, in fact, appears in his de- lightfully active novel as 'Hornblower.' George III is undotty; Nelson a Commodore; Sir John Jervis, • Commander-in-Chief. Great fun. Hero a bit of grandee, who could, so to speak, be Cochrane-Dundonald ... Frigates ... Napoleon in Italy . . . rescue of enchanting young mar- chesa . . . a court-martial . . . drama . . . Bastia

Mr. Jones has written a very good little book about the eastern tropical coast of North Queensland. Twelve hours of tension during the hottest November on record. Three-year-old Johnny Johnson wanders from his home on Black Mountain into an area of dense scrub. There is a bush fire. Snakes can bite. A half-crazed murderer is abroad. Mr. Jones puts it all down quietly. No stupid melodrama. A little boy is lost on the slopes of Black Mountain: 'In that way myths were made, of life in the Valley.' And so they are. And so Mr. Jones has made his strong and simple story. Johnny Lost is good.

Mr. White, in The Rose in the Brandy Glass, has attempted something quite different : a myth of 'honour.' Colonel Morrigan of the Blue and Grey Club refuses to compromise. This is a lamentable chronicle, presumably written by the dear old colonel's soldier servant, Hamish (loyal, unpaid, undemanding, half-witted). Mr. Manchip White has good intentions. He appreciates lost virtues. But his novel has no finesse, and is em- barrassingly sentimental. As Gertrude Jek■. II said to Logan Pearsall Smith, one should stay in one's class.