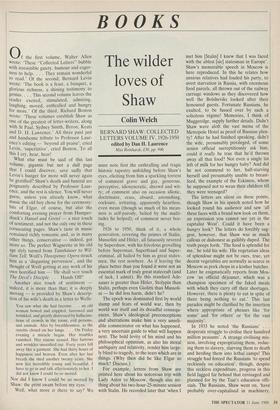 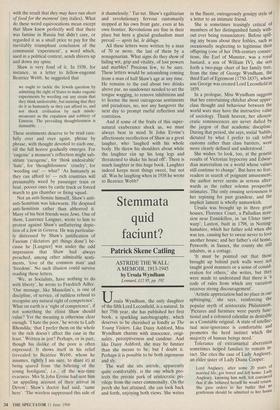 The wilder loves of Shaw

0 t the first volume, Walter Allen wrote: 'These "Collected Letters" bubble With irresistible gaiety, humour and eager- ness to help. . . . They remain wonderful to read.' Of the second, Bernard Levin wrote: 'The book is a feast, a banquet, a glorious richness, a shining testimony to genius. . . . This second volume leaves the reader excited, stimulated, admiring, laughing, moved, enthralled and hungry for more.' Of the third, Richard Boston wrote: 'These volumes establish Shaw as one of the greatest of letter-writers, along With St Paul, Sydney Smith, Byron, Keats and D. H. Lawrence.' All three paid just and handsome tribute to Professor Laur- ence's editing — 'beyond all praise', cried Levin, 'superlative', cried Boston. To all this I cry, hear, hear!

What else must be said of this last volume, gigantic but not a dull page that I could discover, save sadly that Levin's hunger for more will never again be gratified? Shaw's death and funeral are Poignantly described by Professor Laur- ence, and the rest is silence. You will never guess, unless you already know, what music the old boy chose for the ceremony: bits of Elgar, of course, but also the comforting evening prayer from Humper- dinck's Hansel and Gretel — a nice touch of sentiment, and not the only one in these coruscating pages. Shaw's taste in music remained richly romantic and, as in many Other things, conservative — indeed, got more so. The perfect Wagnerite in his old age slyly turned from Tannhauser to Wil- liam Tell. Weill's Threepenny Opera struck him as a 'disgusting perversion', and the thought of Weill getting at any work of his own horrified him — He shall NOT touch The Devil's Disciple. . . . Hands Off!'

. Another nice touch of sentiment — indeed, it is more than that; it is deeply moving — is provided by Shaw's descrip- tion of his wife's death in a letter to Wells:

You saw what she had become . . . an old woman bowed and crippled, furrowed and wrinkled, and greatly distressed by hallucina- tions of crowds in the room, evil persons, and animals. Also by breathlessness, as the osteitis closed on her lungs. . . . On Friday evening a miracle began. Her troubles vanished. Her visions ceased. Her furrows and wrinkles smoothed out. Forty years fell away like a garment. She had thirty hours of happiness and heaven. Even after her last breath she shed another twenty years. She now lies incredibly young and beautiful. I have to go in and talk affectionately to her. I did not know I could be so moved.

Nor did I know I could be so moved by Shaw: the print swam before my eyes. Well, what more is there to say? We must note first the enthralling and tragic historic tapestry unfolding before Shaw's eyes, eliciting from him a sparkling torrent of comment grave and gay, generous, perceptive, idiosyncratic, shrewd and wit- ty; of comment also on occasion idiotic, doctrinaire, crass, absurd, astonishing, cocksure, irritating, apparently heartless, even mean (though so much of his mean- ness is self-parody, belied by the multi- tudes he helped); of comment never bor- ing.

1926 to 1950, think of it, a whole generation, covering the primes of Stalin, Mussolini and Hitler, all fatuously revered by Supershaw, with his frivolous grovelling before Superman, Superfraud and Super- criminal, all hailed by him as great states- men, the rest nowhere. As if leaving the place better than you found it were not an essential mark of truly great statecraft (and of luck, I admit). By this standard Ade- nauer is greater than Hitler, Stolypin than Stalin, perhaps even Giolitti than Mussoli- ni — he did less harm, didn't he?

The epoch was dominated first by world slump and fears of world war, then by world war itself and its dreadful consequ- ences. Shaw's ideological preconceptions and aberrations make him a very unreli- able commentator on what has happened, a very uncertain guide to what will happen next. The bold levity of his mind and his philosophical optimism, as also his moral ambiguity and relativity, render him large- ly blind to tragedy, to the tears which are in things. (Why then did he like Elgar so much? Discuss.) For example, letters from Shaw are printed here about his notorious trip with Lady Astor to Moscow, though alas no- thing about his two-hour-25-minute session with Stalin. He recorded later that 'when I met him [Stalin] I knew that I was faced with the ablest [sic] statesman in Europe'.

Shaw's memorable speech in Moscow is here reproduced. In this he relates how anxious relatives had loaded his party, to avert starvation in Russia, with enormous food parcels, all thrown out of the railway carriage windows as they discovered how well the Bolsheviks looked after their honoured guests. Fortunate Russians, he exulted, to be fussed over by such a solicitous regime! Memories, I think of Muggeridge, supply further details. Didn't Shaw wave aloft the vast menu of the Metropole Hotel as proof of Russian plen- ty? After he had finished speaking, didn't the wife, presumably privileged, of some senior official surreptitiously ask him, could it really be true that he'd thrown away all that food? Not even a single tin left of milk for her hungry baby? And did he not commend to her, half-starving herself and presumably unable to breast- feed, the example of the Eskimos, whom he supposed not to wean their children till they were teenaged?

The letters are silent on these points, though Shaw in his speech noted how he looked round his audience and saw 'all these faces with a brand new look on them, an expression you cannot see yet in the capitalist West'. Could it have been a hungry look? The letters do forcibly sug- gest, however, that Shaw was as much callous or dishonest as gullibly duped. The truth peeps forth. 'The food is splendid for me,' he told his wife. His vegetarian ideas of splendour might not be ours, true, yet decent vegetables are normally as scarce in Moscow as pork chops in a kosher butcher. Later he enigmatically reports from Mos- cow 'an official dejeuner, which was a champion specimen of the faked meals with which they carry off their shortages. However, there is plenty to eat in spite of there being nothing to eat.' This last paradox might be clarified by the insertion where appropriate of phrases like `for some' and 'for others' or 'for the vast majority'.

In 1933 he noted 'the Russians' . . . desperate struggle to civilise their hundred million peasants'. A strange civilising mis- sion, involving expropriating them, reduc- ing them to slavery, starving them to death and herding them into lethal camps! This struggle had forced the Russians 'to spend recklessly on education', though, despite this reckless expenditure, progress in this field lagged far behind that envisaged and planned for by the Tsar's education offi- cials. The Russians, Shaw went on, 'have probably over-capitalised in machinery, with the result that they may have run short of food for the moment' (my italics). What do these weird equivocations mean except that Shaw knew perfectly well that there was famine in Russia but didn't care, or regarded it as a small price to pay for the inevitably triumphant conclusion of the communist 'experiment', a word which, used in a political context, sends shivers up and down my spine.

Shaw is very fond of it. In 1938, for instance, in a letter to fellow-eugenist Beatrice Webb, he suggested that

we ought to tackle the Jewish question by admitting the right of States to make eugenic experiments by weeding out any strain that they think undesirable, but insisting that they do it as humanely as they can afford to, and not shock civilisation by such misde- meanours as the expulsion and robbery of Einstein. The prevailing thoughtlessness is damnable. . .

These sentiments deserve to be read care- fully over and over again, phrase by phrase, with thought devoted to each one, till the full horror gradually emerges. For 'eugenic' a moment's reflection might sub- stitute 'cacogenic', for 'think undesirable' 'hate', for `thoughtlessness"cruelty', for 'weeding out' — what? 'As humanely as they can afford to' — rich countries will presumably weed by passenger train or boat, poorer ones by cattle truck or forced march to gas chamber or firing squad.

Not an anti-Semite himself, Shaw's anti- anti-Semitism was lukewarm. He despised anti-Semitism rather than abhorred it. Many of his best friends were Jews. One of them, Laurence Langner, wrote to him to protest against Shaw's unflattering depic- tion of a Jew in Geneva. He was particular- ly distressed by Shaw's justification of Fascism ('dictators get things done') be- cause he [Langner] was under the odd impression that Shaw had always preached, among other admirable senti- ments, 'love of the common man' and 'freedom'. No such illusion could survive reading these letters.

'We, as Socialists, have nothing to do with liberty', he wrote to Friedrich Adler. 'Our message, like Mussolini's, is one of discipline, of service, of ruthless refusal to recognise any natural right of competence'. What on earth is a 'right of competence', if not something the elitist Shaw should value? Yet the meaning is otherwise clear enough. 'I hate the poor,' he wrote to Lady Rhondda; 'that I prefer them on the whole to the rich doesn't affect the case in the least.' Written in jest? Perhaps, or in part, though his dislike of the poor is often expressed. It shows itself in his relief (revealed to Beatrice Webb, whom he assumes, rightly I am sure, to share it) at being spared from 'the billeting of the young hooligans', i.e., of the war-time evacuees. Mrs St John Ervine had sent him 'an appalling account of their arrival in Devon'; Shaw's doctor had said, 'same here'. 'The wireless suppressed this side of it shamelessly.' Tut-tut. Shaw's egalitarian and revolutionary fervour customarily stopped at his own front gate, even at his own frontier. Revolutions are fine in their place but here a glacial gradualism must prevail — apres lui, le deluge.

All these letters were written by a man of 70 or more, the last of them by a nonagenarian. What signs do they show of failing wit, grip and vitality, of lost powers and marbles? Precious few, to be sure. These letters would be astonishing coming from a man of half Shaw's age at any time. He remains to the end about two drinks above par, no sundowner needed to set the tongue wagging, to remove inhibitions and to license the most outrageous sentiments and paradoxes, no, nor any hangover the next day to prompt rueful reflection and contrition.

And if some of the fruits of this super- natural exuberance shock us, we must always bear in mind St John Ervine's affectionate recollection of Shaw as a great laugher, who 'laughed with his whole body. He threw his shoulders about while the laughter ran up his long legs and threatened to shake his head off'. There is much laughter in this huge book. Laughter indeed keeps most things sweet, but not all. Was he laughing when in 1938 he wrote to Beatrice Webb?