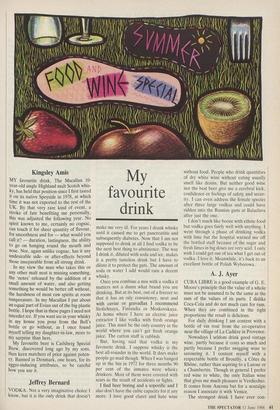 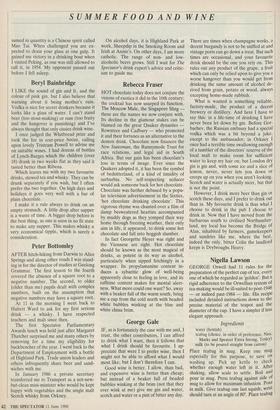 CUBA LIBRE is a good example of G. E. Moore's principle that the value of a whole must not be assumed to be the same as the sum of the values of its parts. I dislike Coca-Cola and do not much care for rum. When they are combined in the right proportions the result is delicious.

For daily drinking I am content with a bottle of vin rosé from the co-operative near the village of La Cadiere in Provence.

Nowadays I seldom drink good vintage wine, partly because it costs so much and partly because I prefer swigging wine to savouring it. I content myself with a respectable bottle of Brouilly, a Cotes du Rh6ne, rather than aspiring to a Latour or a Chambertin. Though in general I prefer red wine to white, the only Italian wine that gives me much pleasure is Verdicchio. It comes from Ancona but for a nostalgic reason I associate it with Venice.

The strongest drink I have ever con-

sumed in quantity is a Chinese spirit called Mao Tai. When challenged you are ex- pected to drain your glass at one gulp. It gained me victory in a drinking bout when I visited Peking, as one was still allowed to call it, in 1954. My opponent passed out before I fell asleep.