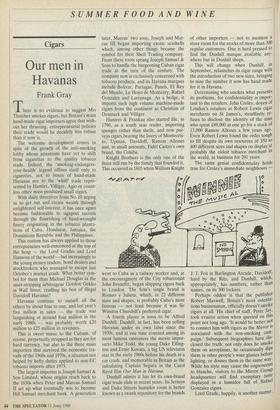 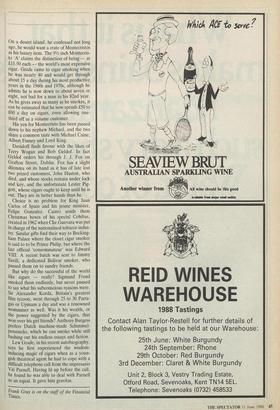 Our men in Havanas

There is no evidence to suggest Mrs Thatcher smokes cigars, but Britain's main hand-made cigar importers agree that with- out her thrusting, entrepreneurial policies their trade would be decidely less robust than it now is.

The welcome development comes in spite of the growth of the anti-smoking lobby whose attentions have yet to shift from cigarettes to the quality tobacco trade. Indeed, the 'smoking-endangers- your-health' legend affixes itself only to cigarettes, not to boxes of hand-made Havanas nor to the 'whiff' trade repre- sented by Hamlet, Vilfiger, Agio or count- less other mass-produced small cigars.

With daily directives from No.10 urging us to get out and create wealth through enlightened self-interest, it has once again become fashionable to signpost success through the flourishing of hand-wrought finery originating in the tobacco planta- tions of Cuba, Honduras, Jamaica, the Dominican Republic and the Philippines.

This custom has always applied to those entrepreneurs well-ensconced at the top of the heap — the Lord Grades and Lord Hansons of the world — but increasingly to the young money traders, bond dealers and stockbrokers who managed to escape last October's market crash. What better sym- bol for them than Michael Douglas as the asset-stripping arbitrageur Gordon Gekko in Wall Street, cradling his box of illegal Davidoff Havanas?

Havanas continue to outsell all the others by about four to one, and last year's five million in sales — the trade was languishing at around four million in the early 1980s — was probably worth £20 million to £25 million in revenues.

This is sweet music to the Cubans, of course, perpetually strapped as they are for hard currency, but also to the three main importers that survived the economic tra- vails of the 1960s and 1970s, a situation not helped by hefty duties applied to non-EC tobacco imports after 1973.

The largest importer is Joseph Samuel & Son Limited, whose origins reach back to the 1830s when Peter and Marcus Samuel II set up what eventually was to become Hill Samuel merchant bank. A generation later, Marcus' two sons, Joseph and Mar- cus III began importing exotic seashells which, among other things became the symbol for their Shell Trading company. From these roots sprang Joseph Samuel & Sons to handle the burgeoning Cuban cigar trade at the turn of the century. The company now is exclusively concerned with tobacco products, and its Havana marques include Bolivar, Partagas, Punch, El Rey del Mundo, Le Hoyo de Monterey, Rafael Gonzalez and Larranaga. As a hedge, it imports such high volume machine-made cigars from the continent as Christian of Denmark and Villiger.

Hunters & Frankau also started life, in 1790, as a south seas trader, importing sponges rather than shells, and now pur- veys cigars bearing the livery of Montecris- to, Upman, Davidoff, Ramon Allones and, in small amounts, Fidel Castro's own brand, the Cohiba.

Knight Brothers is the only one of the three still run by the family that founded it. This occurred in 1865 when William Knight went to Cuba as a railway worker and, at the encouragment of the City tobacconist John Brumfitt, began shipping cigars back to London. The firm's single brand is Romeo y Julieta, which, in 22 different sizes and shapes, is probably Cuba's most famous — not least because it was Sir Winston Churchill's preferred cigar.

A fourth player is soon to be Alfred Dunhill. Dunhill, in fact, has been selling Havanas under its own label since the 1930s, and at one time counted among its most famous customers the movie impre- sario Mike Todd, the young Duke Elling- ton and Ernie Kovacs, a big US television star in the early 1960s before his death in a car crash, and memorable in Britain as the calculating Captain Segura in the Carol Reed film Our Man in Havana.

Dunhill admits it has let its own-brand cigar trade slide in recent years. Its Jermyn and Duke Streets humidor room is better known as a swank repository for the brands of other importers — not to mention a store room for the stocks of more than 300 regular customers. One is hard pressed to find the Dunhill marque available any- where but in Dunhill shops.

This will change when Dunhill, in September, relaunches its cigar range with the introduction of two new sizes, bringing to nine the number it now has hand made for it in Havana.

Determining who smokes what presents its problems, for confidentiality is impor- tant to the retailers. John Croley, doyen of London's retailers at Robert Lewis cigar merchants on St James's, steadfastly re- fuses to disclose the identity of the man who spent £49,000 at one go for a stock of 13,000 Ramon Allones a few years ago. Even Robert Lewis found the order tough to fill despite its own resources of 350 to 400 different sizes and shapes on display at probably the oldest tobacco merchant in the world, in business for 201 years.

The same genial confidentiality holds true for Croley's immediate neighbours — J. J. Fox in Burlington Arcade, Davidoff, hard by the Ritz, and Dunhill, which, appropriately, has numbers, rather than names, on its 300 lockers. Perhaps oddest is that the publisher Robert Maxwell, Britain's most ostenta- tious businessman, officially doesn't smoke cigars at all. His chief of staff, Peter Jay, took evasive action when queried on this point not long ago. 'It would be better not to connect him with cigars as the Mirror is associated with the non-smoking cam- paign.' Subsequent biographies have dis- closed the truth: not only does he smoke them on aeroplanes, he occasionally dips them in other people's wine glasses before lighting, or douses them in the same way: While his style may cause the cognoscenti to blanche, visitors to the Mirror Group headquarters will find exemplary taste displayed in a humidor full of Rafael Gonzalez cigars. Lord Grade, happily, is another matter. On a desert island, he confessed not long ago, he would want a crate of Montecristos as his luxury item. The 91/2 inch Montecris- to 'A' claims the distinction of being — at £15.50. each — the world's most expensive cigar. Grade came to cigar smoking when he was nearly 40 and would get through about 15 a day during his most productive years in the 1960s and 1970s, although he admits he is now down to about seven or eight, not bad for a man in his 82nd year. As he gives away as many as he smokes, it can be estimated that he now spends £50 to £60 a day on cigars, even allowing one- third off as a volume customer.

His yen for Montecristo has been passed down to his nephew Michael, and the two share a common taste with Michael Caine, Albert Finney and Lord King. Davidoff finds favour with the likes of Terry Wogan and Bob Geldof. In fact Geldof orders his through J. J. Fox on Grafton Street, Dublin. Fox has a slight dilemma on its hand as it has of late lost two prized customers, John Huston, who died, and whose stocks remain under lock and key, and the unfortunate Lester Pig- gott, whose cigars ought to keep until he is out. They are in better hands than he.

Choice is no problem for King Juan Carlos of Spain and his prime minister, Felipe Gonzalez. Castro sends them Christmas boxes of his special Cohibas, created in 1962 when Che Guevara was put in charge of the nationalised tobacco indus- try. Similar gifts find their way to Bucking- ham Palace where the closet cigar smoker is said to to be Prince Philip, but where the last official `consommateue was Edward VIII. A recent batch was sent to Jimmy Savill, a dedicated Bolivar smoker, who passed them on to sundry friends.

But why do the successful of the world filce cigars — really? Sigmund Freud smoked them endlessly, but never paused to say what his subconscious reasons were. Sir Alexander Korda, Britain's greatest film tycoon, went through 25 to 30 Parta- gas or Upmans a day and was a renowned womaniser as well. Was it his wealth, or the power suggested by the cigars, that won over his girl friends? Anthony Burgess prefers Dutch machine-made Schimmel- pennincks, which he can smoke while still bashing out his endless essays and fiction.

Lew Grade, in his recent autobiography, says he first experienced the wisdom- inducing magic of cigars when as a youn- gish theatrical agent he had to cope with a difficult telephone call from the impresario Val Parnell. Having lit up before the call, he found he was able to deal with Parnell as an equal. It gave him gravitas.

Frank Gray is on the staff of the Financial Times.