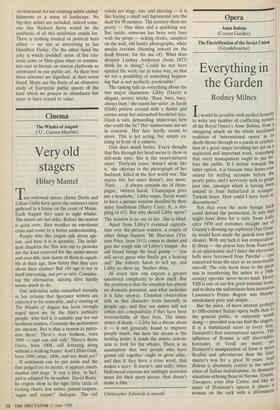 Two widowed sisters (Bette Davis and Lillian Gish) have spent the summers since girlhood in a house on the coast of Maine. Each August they used to sight whales. The sisters are not alike. Before the season is quite over, they weather an emotional crisis and come to a better understanding.

People who like jargon talk about age- ism, and here it is in quantity. The indul- gent chuckles the film sets out to provoke are the kind reserved for the under-threes and over-80s: how funny of them to squab- ble at their age, how funny that they care about their clothes! But old age is not in itself interesting, nor per se cute. Consider- ing the alternative, staying alive hardly seems much to do.

Our television critic remarked recently in her column that Spectator writers are expected to be venerable, and a viewing of The Whales of August has been strongly urged upon me by the film's publicity people, who feel it is suitable pap for our toothless readers. Certainly the performers are ancient. But is that a reason to patro- nise them? There's Ann Sothern, born 1909 — and can still talk! There's Bette Davis, born 1908, still tottering along without a walking frame! And Lillian Gish, born 1896; what, 1896, and not dead yet?

If sentiment can be put aside and the film judged on its merits, it appears insub- stantial and stagy. It was a play, in fact, and is adapted by its author, David Berry. Its origins show in the tight little circle of rocking chairs, low tables, poised teapots, 'sugar and cream?' dialogue. The old voices are stagy, too, and piercing — it is like having a small nail hammered into the skull for 90 minutes. The exterior shots are pretty — blue skies and a sparkling sea. But inside, someone has been very busy with the props — ticking clocks, samplers on the wall, old family photographs, white muslin curtains (blowing inward on the fresh breeze, for the use of). What does director Lindsay Anderson (born 1923) think he is doing? Could he not have opened the work out in some way, so that we see a possibility of something happen- ing that is not perfectly predictable?

The casting tells us everything about the two major characters. Libby (Davis) is elegant, severe, tetchy. 'Busy, busy, busy, always busy,' she taunts her sister, as Sarah (Gish) potters around with a duster and carries away her untouched breakfast tray. Davis is vain, demanding, imperious; how else could she be? Her mannerisms are set in concrete. Her face hardly seems to move. This is not acting, but simply ex- isting in front of a camera.

Gish does much better. Every thought that flits through her head seems to show in still-wide eyes. She is the sweet-natured sister: 'Forty-six years, doesn't seem like it,' she chirrups to the photograph of her husband, killed in the first world war. She enjoys life; her sister doesn't, any more. 'Paris . . . it always reminds me of cham- pagne,' twitters Sarah. 'Champagne gives me a headache,' Libby snaps. Sarah wants to have a picture window installed by their noisy handyman (Harry Carey Jr, a stri- pling of 67). But why should Libby agree?

The window is no use to her. She is blind.

Apart from Libby's eventual capitula- tion over the picture window, a couple of other things happen. Mr Maronov (Vin- cent Price, born 1911) comes to dinner and gets the rough side of Libby's tongue. An old friend brings the local gossip — 'you will never guess who finally got a hearing aid!' She exhorts Sarah to sell up, and Libby to cheer up. Neither does.

At every turn one expects a greater emotional complexity to show itself. But the problem is that the situation has almost no dramatic potential, and what underlies it is false anyway. Common observation tells us that character traits intensify as people age, and that our sisters will not soften into compatibility if they have been irreconcilable all their lives. The immi- nence of death — Libby has a dream about it — is not generally found to improve people much, but here the dream is the turning point; it sends the sisters arm-in- arm to look for the whales. There is an assumption that two people who have grown old together ought to grow alike, and that if they have a cross word, that makes a story. It doesn't; and sadly, when Hollywood veterans are smilingly accorded space for their party pieces, that doesn't make a film.