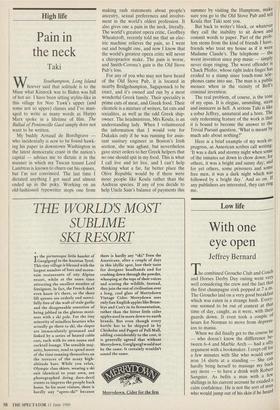 Pain in the neck

WSouthampton, Long Island hoever said that solitude is to the Muse what Kinnock was to Biden was full of hot air. I have been sitting stylite-like in this village for Noo Yawk's upper (and some not so upper) classes and I've man- aged to write as many words as Harpo Marx spoke in a lifetime of film. The Ballad of Pentonville Gaol simply does not want to be written.

My buddy Arnaud de Borchgrave — who incidentally is now to be found hawk- ing his paper in downtown Washington in the latest democratic craze in the nation's capital — advises me to dictate it in the manner in which my Tuscan tenant Lord Lambton is known to churn out his opuses, but I'm not convinced. The last time I dictated anything I got sued and almost ended up in the poky. Working on an old-fashioned typewriter stops one from making rash statements about people's ancestry, sexual preferences and involve- ment in the world's oldest profession. It also gives one a pain in the neck, literally. The world's greatest opera critic, Geoffrey Wheatcroft, recently told me that an elec- tric machine relieves the pain, so I went out and bought one, and now I know that the world's greatest opera critic will never a chiropractor make. The pain is worse, and Smith-Corona's gain is the Old Stove Pub's loss.

For any of you who may not have heard of the Old Stove Pub, it is located in nearby Bridgehampton, Sagaponack to be exact, and it's owned and run by a most wonderful Greek family. Their speciality is prime cuts of meat, and Greek food. Their clientele is a mixture of writers, fat cats and socialites, as well as the odd Greek ship- owner. The headmistress, Mrs Koula, is an understanding lady. When I volunteered the information that I would vote for Dukakis only if he was running for assis- tant sanitary engineer in Boston's Irish section, she was aghast, but nevertheless gave strict orders to her Greek helpers that no one should spit in my food. This is what I call live and let live, and I can't help thinking what a far, far better place the Olive Republic would be if there were more people like Koula rather than the Andreas species. If any of you decide to help Uncle Sam's balance of payments this summer by visiting the Hamptons, make sure you go to the Old Stove Pub and tell Koula that Taki sent you. But back to writer's block, or whatever they call the inability to sit down and commit words to paper. Part of the prob- lem stems from the kind of friends I have, friends who treat my house as if it were Madame Claude's. The telephone — the worst invention since pop music — simply never stops ringing. The worst offender is Chuck Pfeifer, whose right index finger has eroded to a stump since touch-tone tele- phones came into use. The man is a public menace when in the vicinity of Bell's criminal invention.

The real problem, of course, is the tone of my opus. It is elegiac, unsmiling, stem and insincere as hell. A serious Taki is like a sober Jeffrey, unnatural and a bore. The only redeeming feature of the work is that it is bound to become the answer to the Trivial Pursuit question, 'What is meant by much ado about nothing?'

Here is a brief example of my work-in- progress, as American scribes call writing: 'It was a dark and stormy night when some of the inmates sat down to chow down; for others, it was a bright and sunny day; and for yet others, some prisoners and some free men, it was a dark night which was followed by a bright day.' And so O. If any publishers are interested, they can ring me.