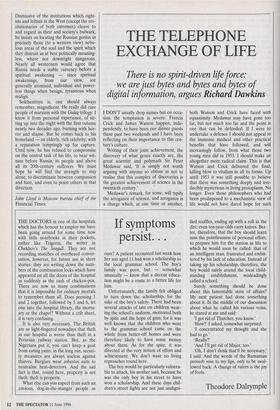 THE DOCTORS in one of the hospitals which has the honour to employ me have been going around for some time now with little notebooks in their pockets, rather like Trigorin, the writer in Chekhov's The Seagull. They are not recording snatches of overheard conver- sation, however, for future use in short stories: they are writing down the num- bers of the combination locks which have appeared on all the doors of the hospital as suddenly as the rash of chicken-pox. There are now so many combinations that it is impossible for ordinary mortals to remember them all. Does pressing 1 and 2 together, followed by 5 and 6, let one into the hospital library, the mortu- ary or the chapel? Without a crib sheet, it is very confusing.

It is also very necessary. The British are so light-fingered nowadays that theft in our hospital is worse than theft in a Peruvian railway station. But, as the Nigerians put it, you can't keep a goat from eating yams: in the long run, securi- ty measures are always useless against thieves. Burglars wear asbestos suits to neutralise heat-detectors. And the sad fact is that, round here, property is not theft: theft is property.

What else can you expect from such an envious, dog-in-the-manger people as ours? A patient recounted last week how her son aged 11 had won a scholarship to the local grammar school. The boy's family was poor, but — somewhat unusually — knew that a decent educa- tion might be a route to a better life for him.

Unfortunately, the family felt obliged to turn down the scholarship, for the sake of the boy's safety. There had been several attacks of late on children wear- ing the school's uniform, motivated both by spite and the hope of gain; for it was well known that the children who went to the grammar school came on the whole from better-off homes and were therefore likely to have some money about them. As for the spite, it was directed at the very notion of effort and achievement. We don't want no living reproaches round here.

The boy would be particularly vulnera- ble to attack, his mother said, because he was the only boy in his street to have won a scholarship. And these days chil- dren's street fights are not just undigni- fied scuffles, ending up with a roll in the dirt: even ten-year-olds carry knives. Bet- ter, therefore, that the boy should learn now the pointlessness of personal effort, to prepare him for the station in life to which he would soon be called: that of an intelligent man, frustrated and embit- tered by his lack of education. Instead of taking up his scholarship, therefore, the boy would safely attend the local child- minding establishment, misleadingly called a school.

Surely something should be done about this lamentable state of affairs? My next patient had done something about it. In the middle of our discussion about what he called his various veins, he stared at me and said: `I got rid of Thatcher, you know.' `How?' I asked, somewhat surprised.

`I concentrated my thought and she had to go.'

`Oh, I don't think that'll be necessary,' I said. And the words of the Rumanian proverb rose to my lips, only to be swal- lowed back: A change of rulers is the joy of fools.