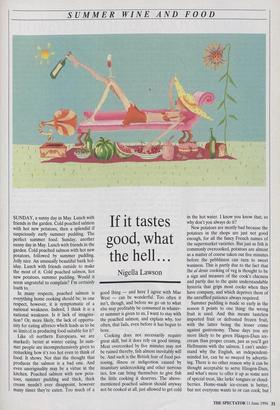 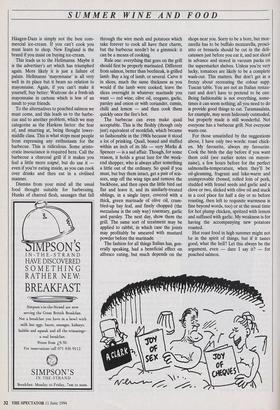 If it tastes good, what the hell...

In many respects, poached salmon is everything home cooking should be; in one respect, however, it is symptomatic of a national weakness. Indeed, I think it is a national weakness. Is it lack of imagina- tion? Or, more likely, the lack of opportu- nity for eating alfresco which leads us to be so limited in producing food suitable for it?

Like all northern Europeans, we are marked4 better at winter eating. In sum- mer people are incomprehensively given to remarking how it's too hot even to think of food. It shows. Not that the thought that produces the salmon is a bad one. And even unoriginality may be a virtue in the kitchen. Poached salmon with new pota- toes, summer pudding and thick, thick cream needn't ever disappoint, however many times they're eaten. Too much of a good thing — and here I agree with Mae West — can be wonderful. Too often it isn't, though, and before we go on to what else may profitably be consumed in whatev- er summer is given to us, I want to stay with the poached salmon, and explain why, too often, that fails, even before it has begun to bore.

Cooking does not necessarily require great skill, but it does rely on good timing. Meat overcooked by five minutes may not be ruined thereby, fish almost inevitably will be. And such is the British fear of food poi- soning, illness or indigestion caused by insanitary undercooking and other nervous tics, few can bring themselves to give fish the little cooking it deserves. The above- mentioned poached salmon should anyway not be cooked at all, just allowed to get cold in the hot water. I know you know that; so why don't you always do it?

New potatoes are mostly bad because the potatoes in the shops are just not good enough, for all the fancy French names of the supermarket varieties. But just as fish is commonly overcooked, potatoes are almost as a matter of course taken out five minutes before the pebbliness can turn to sweet waxiness. This is partly due to the fact that the al dente cooking of veg is thought to be a sign and measure of the cook's chicness and partly due to the quite understandable hysteria that grips most cooks when they have company, and which deprives them of the unruffled patience always required.

Summer pudding is made so early in the season it points to one thing: the wrong fruit is used. And this means tasteless imported fruit or defrosted frozen fruit, with the latter being the lesser crime against gastronomy. These days you are more likely to be given Haagen-Dazs ice- cream than proper cream, just as you'll get Hellmanns with the salmon. I can't under- stand why the English, an independent- minded lot, can be so swayed by advertis- ing. There is no other reason why it can be thought acceptable to serve Haagen-Dazs, and what's more to offer it up as some sort of special treat, like larks' tongues or cloud- berries. Home-made ice-cream is better, but not everyone wants to or can cook, but

Haagen-Dazs is simply not the best com- mercial ice-cream. If you can't cook you must learn to shop. New England is the brand if you insist on buying ice-cream.

This leads us to the Hellmann. Maybe it is the advertiser's art which has triumphed' again. More likely it is just a failure of palate. Hellmanns 'mayonnaise' is all very well in its place but it bears no relation to mayonnaise. Again, if you can't make it yourself, buy better: Waitrose do a fresh-ish mayonnaise in cartons which is less of an insult to your friends.

To the alternatives to poached salmon we must come, and this leads us to the barbe- cue and to another problem, which we may categorise as the Harkess factor: the fear of, and smarting at, being thought lower- middle class. This is what stops most people from expressing any enthusiasm for the barbecue. This is ridiculous. Some aristo- cratic insouciance is required here. Call the barbecue a charcoal grill if it makes you feel a little more soigné, but do use it even if you're eating inside, as you can cook over drinks and then eat in a civilised manner.

Dismiss from your mind all the usual food thought suitable for barbecuing. Hunks of charred flesh, sausages that fall through the wire mesh and potatoes which take forever to cook all have their charm, but the barbecue needn't be a gimmick: it can be a means of cooking.

Rule one: everything that goes on the grill should first be properly marinated. Different from salmon, better than beefsteak, is grilled lamb. Buy a leg of lamb, or several. Carve it in slices, much the same thickness as you would if the lamb were cooked; leave the slices overnight in whatever marinade you want — red wine, olive oil, oregano, garlic, parsley and onion or with coriander, cumin, chilli and lemon — and then cook them quickly once the fire's hot.

The barbecue can even make quail acceptable. This is the fleshly (though only just) equivalent of monkfish, which became so fashionable in the 1980s because it stood a lot of prinking. Quail, boned and stuffed within an inch of its life — very Marks & Spencer — is a sad affair. Though, for some reason, it holds a great lure for the week- end shopper, who is always after something a little out of the ordinary. So quail if you must, but buy them intact, get a pair of scis- sors, snip off the wing tips and remove the backbone, and then open the little bird out flat and leave it, and its similarly-treated siblings, in a single layer, covered with a thick, green marinade of olive oil, crum- bled-up bay leaf, and finely chopped (the mezzaluna is the only way) rosemary, garlic and parsley. The next day, show them the grill. The same sort of treatment may be applied to rabbit, in which case the joints may profitably be smeared with mustard powder before the marinade.

The fashion for all things Italian has, gen- erally speaking, had a beneficial effect on alfresco eating, but much depends on the shops near you. Sony to be a bore, but moz- zarella has to be buffalo mozzarella; prosci- utto or bresaola should be cut in the deli- catessen just before you eat it, and not sliced in advance and stored in vacuum packs on the supermarket shelves. Unless you're very lucky, tomatoes are likely to be a complete wash-out. This matters. But don't get in a frenzy about recreating the colour supp. Tuscan table. You are not an Italian restau- rant and don't have to pretend to be one. Being fashionable is not everything, some- times it can seem nothing; all you need to do is provide good things to eat. Taramasalata, for example, may seem hideously outmoded, but properly made is still wonderful. Not everyone has a barbecue grill. Not everyone wants one.

For those unsatisfied by the suggestions above, I have only two words: roast chick- en. My favourite, always my favourite. Cook the birds the day before if you want them cold (see earlier notes on mayon- naise), a few hours before for the perfect salmonella-temperature, when they'll be oil-gleaming, fragrant and luke-warm and unimprovable (boned, rolled loin of pork, studded with fennel seeds and garlic and a clove or two, slicked with olive oil and stuck in a cool place for half a day or so before roasting, then left to requisite warmness is fine beyond words, too) or at the usual time for hot plump chicken, spritzed with lemon and suffused with garlic. My weakness is for having the accompanying new potatoes roasted.

Hot roast food in high summer might not be in the spirit of things, but if it tastes good, what the hell? Let this always be the argument, even — dare I say it? — for poached salmon.