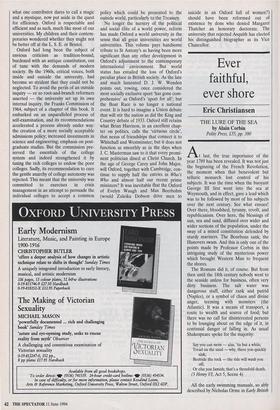 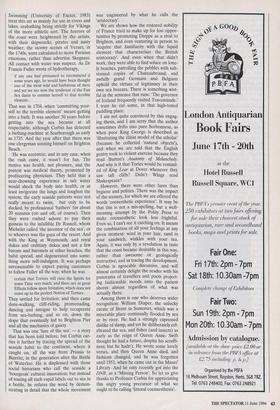 Ever faithful, ever shore

THE LURE OF THE SEA by Main Corbin Polity Press, £35, pp. 380 At last, the true importance of the year 1789 has been revealed. It was not just the beginning of the French Revolution, the moment when that benevolent but telluric monarch lost control of his subjects. It was the time when the buoyant George III first went into the sea at Weymouth, and in effect, gave a lead which was to be followed by most of his subjects over the next century. See what ensues! Over there, bloodshed, tyranny, revolt, and republicanism. Over here, the blessings of sun, sea and sand, diffused over wider and wider sections of the population, under the sway of a mixed constitution defended by sturdy mariners. The Bourbons sank; the Hanovers swam. And this is only one of the points made by Professor Corbin in this intriguing study of the mysterious power which brought Western Man to frequent the shores.

The Romans did it, of course. But from then until the 18th century nobody went to the seaside unless for business, often very dirty business. The salt water was dangerous stuff, either rank and putrid (Naples), or a symbol of chaos and divine anger, teeming with monsters (the Atlantic). It was a means of transport, a route to wealth and source of food; but there was no call for disinterested persons to be lounging about on the edge of it, in continual danger of falling in. As usual Shakespeare spoke for the majority:

Say you can swim — alas, 'tis but a while; Tread on the sand — why, there you quickly sink; Bestride the rock — the tide will wash you off,

Or else you famish; that's a threefold death. (3 Henry VI, Act 5, Scene 4) All the early swimming manuals, so ably described by Nicholas Orme in Early British Swimming (University of Exeter, 1983) treat this art as mainly for use in rivers and lakes, seabathing being strictly for Vikings of the more athletic sort. The horrors of the coast were heightened by the artists, with their shipwrecks, pirates and nasty weather; the stormy scenes of Vernet, in the 1740s, were calculated to move Parisian emotions, rather than advertise Skegness. All contact with water was suspect. As Dr Francis Fuller wrote of hydrotherapy,

if any one had presumed to recommend it some years ago, he would have been thought one of the most wild and barbarous of men; and yet we see now the tenderest of the Fair Sex dares to commit herself to that terrible element.

That was in 1704, when 'committing your- self to the terrible element' meant getting into a bath. It was another 50 years before getting into the sea became at all respectable, although Corbin has detected a bathing-machine at Scarborough as early as 1735. And the year after that there was one clergyman sunning himself on Brighton Beach.

He was eccentric; and in any case, when the rush came, it wasn't for fun. The motive was health, not pleasure, and the pretext was medical theory, promoted by profiteering physicians. They held that a near-drowning experience in salt water would shock the body into health, or at least invigorate the lungs and toughen the system; the early seaside patients were not really meant to swim, but only to be ducked, by professional 'bathers' for about 20 minutes (on and off, of course). Then they were rushed ashore to pay their guineas to the infallible Dr Russell, whom Michelet called 'the inventor of the sea', or to whoever was the guru of the resort. And with the King at Weymouth, and royal dukes and ordinary dukes and not a few barons and baronets at other beaches, the habit spread, and degenerated into some- thing more self-indulgent. It was perhaps unreasonable to expect paying customers to follow Fuller all the way, when he was

certain that Torture will raise the Spirits for some Time very much; and there are as great Effects follow upon Irritation, which does not

come up to the perfect Notion of Torture. They settled for Irritation; and then came dune-walking, cliff-riding, promenading, dancing and intrigue to help recuperate from sea-bathing, and so on, down the slope that eventually led to Brighton Pier and all the mechanics of gaiety.

That was one 'lure of the sea' — a story that has been told before, but Corbin car- ries it further by tracing the spread of the seaside habit to the continent, where it caught on, all the way from Prussia to Biarritz, in the generation after the Battle of Waterloo. He is displeased with those social historians who call the seaside a `bourgeois' cultural innovation; but instead of tossing all such vapid labels out to sea in a bottle, he refutes the word by demon- strating in detail that the whole movement was engineered by what he calls the `aristocracy'.

We are shown how the restored nobility of France tried to make up for lost oppor- tunities by promoting Dieppe as a rival to Brighton, and even venturing in person to `acquire that familiarity with the liquid element that characterises the British aristocracy'. And even when that didn't work, they were able to find solace on lone- ly beaches, patrolling the pebbles with salt- stained copies of Chateaubriand; and awfully grand Germans and Belgians upheld the virtues of legitimacy in their own sea breezes. There is something wist- ful in the sentence that runs: 'The governor of Iceland frequently visited Travemunde.' I trust he cut some, in that high-toned paddling place. I am not quite convinced by this engag- ing thesis, and I am sorry that the author sometimes drifts into pure Sorbonnese, as when poor King George is described as `illustrating the elitist model of the scholar' (because he collected 'natural objects'), and when we are told that the English gentry took to violent exercise because they read Burton's Anatomy of Melancholy. And why is it that Tories would be remind- ed of King Lear at Dover whenever they saw tall cliffs? Didn't Whigs read Shakespeare?

However, there were other lures than hygiene and politics. There was the impact of the scenery, for which we are offered the words `coenesthetic experience'. It may be that this is not a mis-spelling, but a well- meaning attempt by the Polity Press to make coenaesthetic look less frightful. Even so, I can't see it catching on. It means the combination of all your feelings at any given moment: wind in your hair, sand in your sandwich, winldes with your tea. Again, it was only by a revolution in taste that the coast became desirable in this way, rather than awesome or geologically instructive; and in tracing the development, Corbin is agreeable discursive, and will almost certainly delight the reader with his panorama of travellers and poets project- ing fashionable moods onto the patient shores almost regardless of what was actually there.

Among them is one who deserves wider recognition: William Diaper, the unlucky curate of Brent in Somerset, which was a miserable place continually flooded by sea or by river. He had a strongly expressed dislike of damp, and yet he deliberately cel- ebrated the sea, and fishes (and insects) as early as the reign of Queen Anne. Swift thought he had a future, despite his scruffi- ness; but he hadn't. He wrote some lovely verses, and then Queen Anne died, and fashions changed, and he was forgotten until 1951, when he came out in the Muses' Library. And he only recently got into the DNB, as a 'Missing Person'. So let us give thanks to Professor Corbin for appreciating this angry young precursor of what we ought to be calling 'littoral coenaesthesia'.