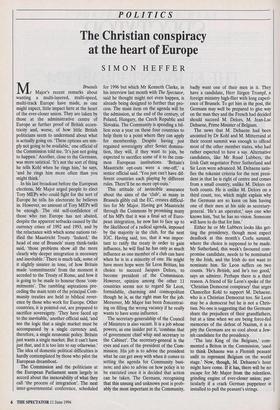 The Christian conspiracy at the heart of Europe

r Major's recent remarks about wanting a multi-layered, multi-speed, multi-track Europe have made, as one might expect, little impact here at the heart of the ever-closer union. They are taken by those at the administrative centre of Europe as further proof of British eccen- tricity and, worse, of how little British politicians seem to understand about what is actually going on. 'These options are sim- ply not going to be available,' one official of the Commission told me. 'It's just not going to happen.' Another, close to the Germans, was more satirical. 'It's not the sort of thing he tells Kohl when he rings him,' he says, `and he rings him more often than you might think.'

In his last broadcast before the European elections, Mr Major urged people to elect Tory MEPs who could fight for the sort of Europe he tells his electorate he believes in. However, no amount of Tory MEPs will be enough. The old self-confidence of those who run Europe has not abated, despite the apparent setbacks caused by the currency crises of 1992 and 1993, and by the reluctance with which some nations rat- ified the Maastricht Treaty. 'Indeed,' the head of one of Brussels' many think-tanks said, 'those problems show all the more clearly why deeper integration is necessary and inevitable.' There is much talk, some of it slightly sinister in tone, of how Britain made 'commitments' from the moment it acceded to the Treaty of Rome, and how it is going to be made to honour those 'com- mitments'. The rambling aspirations pre- ceding the main texts of the principal Com- munity treaties are held in biblical rever- ence by those who work for Europe. Other countries, it is pointed out, are prepared to sacrifice sovereignty. 'They have faced up to the inevitable,' another official said, 'and see the logic that a single market must be accompanied by a single currency and, therefore, a single economic policy. Britain just wants a single market. But it can't have just that, and it is too late to say otherwise.' The idea of domestic political difficulties is hardly contemplated by those who pilot the European dreamboat.

The Commission and the politicians at the European Parliament seem largely in accord about the inexorability of what they call 'the process of integration'. The next inter-governmental conference, scheduled for 1996 but which Mr Kenneth Clarke, in his interview last month with The Spectator, said he thought might not even happen, is already being designed to further that pro- cess. The main item on the agenda will be the admission, at the end of the century, of Poland, Hungary, the Czech Republic and Slovakia. The Community is spending a bil- lion ecus a year on these four countries to help them to a point where they can apply for membership. Despite having just regained sovereignty after Soviet domina- tion, they will, if they want to join, be expected to sacrifice some of it to the com- mon European institutions. 'Britain's Maastricht opt-outs were a one-off,' a senior official said. 'You just can't have dif- ferent countries each playing by different rules. There'll be no more opt-outs.'

This attitude of invincible assurance about the aims of the 'club', as many in Brussels glibly call the EC, creates difficul- ties for Mr Major. Having got Maastricht through the Commons by promising many of his MPs that it was a final act of Euro- pean integration, he now has to face up to the likelihood of a radical agenda, imposed by the majority in the club, for the next IGC. Having said, too, that it was impor- tant to ratify the treaty in order to gain influence, he will find he has only as much influence as one member of a club can have when he is in a minority of one. He might have more hope were Sir Leon Brittan, his choice to succeed Jacques Delors, to become president of the Commission. However, opinion among the other 11 countries seems not to regard Sir Leon, formidable, charming and cosmopolitan though he is, as the right man for the job. Moreover, Mr Major has been Concentrat- ing on filling the wrong vacancy if he really wants to have some influence.

The secretary-generalship of the Council of Ministers is also vacant. It is a job whose powers, as one insider put it, 'combine that of government chief whip and secretary to the Cabinet'. The secretary-general is the eyes and ears of the president of the Com- mission. His job is to advise the president what he can get away with when it comes to setting the agenda for Community busi- ness; and also to advise on how policy is to be executed once it is decided that action can be taken. The Germans, recognising that this unsung and unknown post is prob- ably the most important in the Community, badly want one of their men in it. They have a candidate, Herr Jurgen Trompf, a foreign ministry high-flier with long experi- ence of Brussels. To get him in the post, the Germans may well be prepared to give way on the man they and the French had decided should succeed M. Delors, M. Jean-Luc Dehaene, Prime Minister of Belgium.

The news that M. Dehaene had been anointed by Dr Kohl and M. Mitterrand at their recent summit was enough to offend most of the other member states, who had rather expected to have a say. Alternative candidates, like Mr Ruud Lubbers, the Irish Gatt negotiator Peter Sutherland and Sir Leon were advanced. M. Dehaene satis- fies the tokenist criteria for the next presi- dent in that he is right of centre and comes from a small country, unlike M. Delors on both counts. He is unlike M. Delors on a third count, too, which might explain why the Germans are so keen on him having one of their men at his side as secretary- general. 'He's an operator,' says one who knows him, 'but he has no vision. Someone will have to do that for him.'

Either he or Mr Lubbers looks like get- ting the presidency, though most expect deadlock at this month's Corfu summit, where the choice is supposed to be made. Mr Sutherland, this week's favoured com- promise candidate, needs to be nominated by the Irish, and the Irish do not want to nominate him. Sir Leon suffers on two counts. 'He's British, and he's too good,' says an admirer. Perhaps there is a third reason. A friend of Sir Leon's spoke of the `Christian Democrat conspiracy' that urges Chancellor Kohl to support M. Dehaene, who is a Christian Democrat too. Sir Leon may be a democrat but he is not a Chris- tian. No one is suggesting that the Germans share the prejudices of their grandfathers, but at a time when we are being force-fed memories of the defeat of Nazism, it is a pity the Germans are so cool about a Jew- ish candidate for the presidency.

The late King of the Belgians,' com- mented a Briton in the Commission, 'used to think Dehaene was a Flemish peasant unfit to represent Belgium on the world stage.' Now, though, M. Dehaene's hour might have come. If it has, there will be no escape for Mr Major from the relentless, grinding engine of ever-closer union; par- ticularly if a crack German puppeteer is installed to pull the peasant's strings.