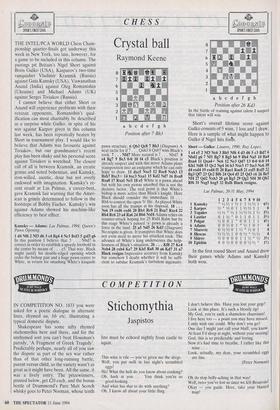 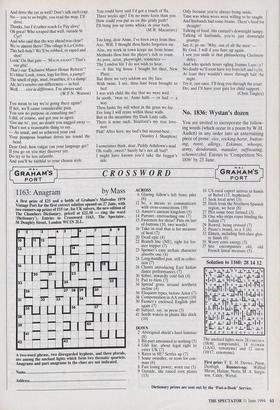 Jaspistos IN COMPETITION NO. 1833 you were asked for a poetic dialogue in alternate lines, rhymed aa, bb etc, illustrating a typical domestic dispute.

Shakespeare has some nifty rhymed stichomythia here and there, and for the unrhymed sort you can't beat Housman's parody, 'A Fragment of Greek Tragedy'. Predictably perhaps, nearly all of you saw the dispute as part of the sex war rather than of that other long-running battle, parent versus child, so the variety wasn't as great as it might have been. All the same, it was a lively entry. The prizewinners, printed below, get £211 each, and the bonus bottle of Drummond's Pure Malt Scotch whisky goes to Peter Norman, whose tenth line must be echoed nightly from castle to squat.

This wine is vile — you've given me the dregs. Well, you put milk in last night's scrambled eggs!

Ha! What the hell do you know about cooking? Oh, hark at you . . . You think you're so good-looking.

And what has that to do with anything? Oh, I know all about your little fling. I don't believe this. Have you lost your grip? Look at this place. It's such a bloody tip! My God, you're such a shameless chauvinist! I live here too — a point you may have missed. I only wish one could. Why don't you go? One day I might just call your bluff, you know. At least I'd sleep at night, without your snoring! God, this is so predictable and boring. Now -it's had time to breathe, I rather like this

Look, actually, my dear, your scrambled eggs are fine.

(Peter Norman) Oh do stop belly-aching in that way!

And drive the car as well? Don't talk such crap. No — you're so bright, you read the map. I'll drive.

Thanks, but I'd rather reach Le Puy alive! Oh great! Who scraped that wall, outside St Cyr? And who said that the way ahead was clear? We're almost there! This village is La Crotte. This hell-hole? We'll be robbed, or raped and shot!

Look! On that gate — `MALpLAisAN-r! That's our gite!

If not, we'll cause considerable pain.

You saw no purpose in consulting me? I did, of course, and got you to agree. `Got me to', yes; no doubt you nagged away - That's not a reasonable thing to say.

— As usual, and so achieved your end. Your pompous bombast drives me round the bend.

Dear God, how vulgar can your language get?

If you go on you may discover yet.

Do try to be less infantile. And you'll be faithful to your chosen style. You could have said I'd got a touch of flu. Three weeks ago? I'm no more keen than you. How could you put us on this grisly path? I'll bring you up some whisky in your bath.

(M.R. Macintyre) Too long, dear Anne, I've been away from thee. Aye, Will, I thought thou hadst forgotten me. Alas, my work in town keeps me from home. Methinks thou hast the player's itch to roam. As poet, actor, playwright, sonneteer Thy London life I do not wish to hear. — A fine big house I bought for thee, New Place.

But there we very seldom see thy face.

With twins, I see, thou hast been brought to bed.

I was with child the day that we were wed.

Thou hadst thy will when in the grass we lay. Ere long I will retire within these walls. But in the meantime thy Dark Lady calls. There is none such. Stratford's my true love- nest.

Pish! After hers, my bed's but second-best.

I might have known you'd take the beggar's side. Only because you're always being snide.

Time was when wives were willing to be taught. And husbands had some brains. There's food for thought!

I saw you smile at that philandering Cholmon- deley.

And who spends hours ogling Joanna Lum!ey? No doubt we'll soon have toy boys left and right. At least they wouldn't snore through half the night.

Try it, just once. I'll drag you through the court.

Do, and have your guts for child support.