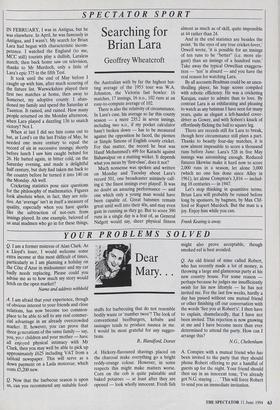 IN FEBRUARY, I was in Antigua, but he was elsewhere. In April, he was famously in Antigua, and I wasn't. My search for Brian Lara had begun with characteristic incom- petence. I watched the England (to me, MCC still) tourists play a dullish, Laraless match; then back home saw on television, thanks to Mr Murdoch, only a little of Lara's epic 375 in the fifth Test.

It took until the end of May before I caught up with him, after much scouring of the fixture list. Warwickshire played their first two matches at home, then away to Somerset, my adoptive county. I aban- doned my family and spend the Saturday at Taunton. It rained, and rained. How many people returned on the Monday afternoon, when Lara played a dazzling 136 to snatch victory? Not I.

When at last I did see him come out to bat, at Lord's on the last Friday of May, he needed one more century to equal the record of six in successive innings; shortly before lunch I saw him caught behind for 26. He batted again, in bitter cold, on the Saturday evening, and made a delightful half century, but duty had taken me back to the country before he turned it into 140 on the Monday. Ah well.

Cricketing statistics pose nice questions for the philosophy of mathematics. Figures look absolute when, in fact, they are rela- tive. An 'average' isn't in itself a measure of quality, especially when you have quirks like the subtraction of not-outs from innings played. In one example, beloved of us anal madmen who go in for these things, the Australian with by far the highest bat- ting average of the 1953 tour was W.A. Johnston, the Victoria fast bowler: 16 matches, 17 innings, 16 n.o., 102 runs at an easy-to-compute average of 102. There is also the relativity of circumstance. In Lara's case, his average so far this county season — a mere 235.2 in seven innings, including two n.o., if my pocket calculator hasn't broken down — has to be measured against the opposition he faced, the piemen or Simple Simons of English county cricket. For that matter, the record he beat was Hanif Mohammed's 499 for Karachi against Bahawalpur on a matting wicket. It depends what you mean by 'first-class', does it not?

Much nonsense was spoken and written on Monday and Tuesday about Lara's record 501, one broadcaster asininely call- ing it 'the finest innings ever played'. It was no doubt an amazing performance — and one which only a young man would have been capable of. Great batsmen remain great until well into their 40s, and may even gain in cunning as they go. But to score 390 runs in a single day is a feat of, as General Nidgett would say, sheer physical fitness almost as much as of skill, quite impossible at 44 rather than 24.

And in the end statistics are besides the point. 'In the eyes of any true cricket-lover,' Orwell wrote, it is possible for an innings of ten runs to be "better" (i.e. more ele- gant) than an innings of a hundred runs.' Take away the typical Orwellian exaggera- tion — 'ten' is absurd — and you have the real reason for watching Lara.

By all accounts Bradman could be an unen- thralling player, his huge scores compiled with robotic efficiency. He was a cricketing Karajan, easier to admire than to love. By contrast Lara is as exhilarating and pleasing to watch as any batsman I have seen for many years, quite as elegant a left-handed cover- driver as Gower, and with Sobers's knack of effortlessly flicking the ball to square leg.

There are records still for Lara to break, though here circumstance still plays a part. Thanks to beastly four-day matches, it is now almost impossible to score a thousand runs before June: Lara's 528 in five May innings was astonishing enough. Reduced fixtures likewise make it hard now to score 2,000 runs in a season, let alone 3,000 (which no one has done since Alley in 1961), let alone Compton's 3,816 — includ- ing 18 centuries — in 1947.

Let's stop thinking in quantitive terms. Brian Lara will probably be ruined before long by sponsors, by bagmen, by Max Clif- ford or Rupert Murdoch. But the man is a joy. Enjoy him while you can.