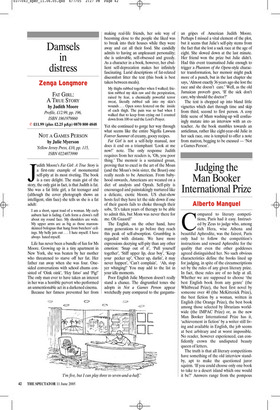 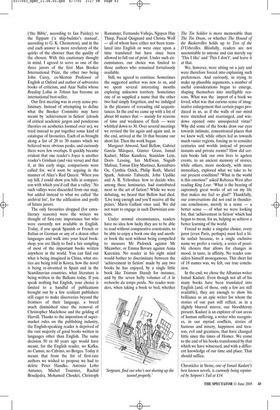 Compared to literary competitions, Paris had it easy. Instructed by Zeus to judge who, among rich Hera, wise Athena and beautiful Aphrodite, was the fairest, Paris only had to follow the competition’s instructions and reward Aphrodite for the quality that even the other goddesses agreed distinguished her. No such obvious characteristics define the books lined up for judging, in spite of the circumscriptions set by the rules of any given literary prize. In fact, these rules are of no help at all. Whether we are supposed to choose ‘the best English book from any genre’ (the Whitbread Prize), the best first novel by someone over 40 (the McKitterick Prize), the best fiction by a woman, written in English (the Orange Prize), the best book among those selected by librarians worldwide (the IMPAC Prize) or, as the new Man Booker International Prize has it, ‘achievement in fiction’ by a writer still living and available in English, the job seems at best arbitrary and at worst impossible. No reader, however experienced, can confidently crown the undisputed beauty queen of letters.

The truth is that all literary competitions have something of the old interview standby, apt to make the questioned juror squirm. ‘If you could choose only one book to take to a desert island which one would it be?’ Answers range from the pompous (‘the Bible’, according to Ian Paisley) to the flippant (‘a ship-builder’s manual’, according to G. K. Chesterton), and in the end each answer is more revelatory of the quirks of the chooser than the quality of the chosen. With this cautionary thought in mind, I agreed to serve as one of the three jurors of the first Man Booker International Prize, the other two being John Carey, ex-Merton Professor of English at Oxford and author of subversive books of criticism, and Azar Nafisi whose Reading Lolita in Tehran has become an international best-seller.

Our first meeting was in every sense preliminary. Instead of attempting to define what the Booker Committe may have meant by ‘achievement in fiction’ (clouds of critical academic jargon and ponderous theories on aesthetics loomed over us), we tried instead to put together some kind of catalogue of favourites. Each of us brought along a list of 20 to 30 names which we believed were obvious peaks, and curiously there were few overlaps. It quickly became evident that one reader’s Joyce is another reader’s Grisham (and vice versa) and that if, at this early stage, comparisons were called for, we’d soon be arguing in the manner of Alice’s Red Queen: ‘When you say hill, I could show you hills in comparison with which you’d call that a valley.’ No such valleys were discarded from our map, but added instead to what we called ‘the archival list’, for the edification and profit of future jurors.

The only favourites dropped (for extraliterary reasons) were the writers we thought of first-rate importance but who were currently not available in English. Today, if you speak Spanish or French or Italian or German or any of a dozen other languages and walk into your local bookshop, you are likely to find a fair sampling of most of the important books written anywhere in the world. You can find out what is being imagined in China, what stories are being told in Korea, how the novel is being re-invented in Spain and in the Scandinavian countries, what literature is being written in the Balkans today. If you speak nothing but English, your choice is limited to a handful of publications brought out by a few resilient publishers still eager to make discoveries beyond the frontiers of their language, a breed much diminished since the removal of Christopher Maclehose and the gelding of Harvill. Thanks to the imposition of supermarket rules on the publishing industry, the English-speaking reader is deprived of the vast majority of good books written in languages other than English. The same decision 50 or 60 years ago would have meant, for the English reader, no Kafka, no Camus, no Calvino, no Borges. Today it means that from the list of first-rate authors we wished to propose we had to delete Peter Handke, Antonio Lobo Antunes, Michel Tournier, Rachid Boudjedra, Mohamed Choukri, Christoph Ransmayr, Fernando Vallejo, Nguyen Huy Thiep, Pascal Quignard and Christa Wolf — all of whom have either not been translated into English or were once upon a time translated but have since been allowed to fall out of print. Under such circumstances, our choice was limited to those authors who remained fortuitously available.

Still, we agreed to continue. Sometimes the suggested author was new to us, and we spent several interesting months exploring unknown territory. Sometimes one of us supplied a name that the other two had simply forgotten, and we indulged in the pleasure of rereading old acquaintances. In the end we came up with a list of about 60 names that — mainly for reasons of time and weakness of flesh — were whittled down to 30. Over several meetings we revised the list again and again and, in the end, arrived at the 18 that became our short list. Then the work began.

Margaret Atwood, Saul Bellow, Gabriel García Márquez, Günter Grass, Ismail Kadaré, Milan Kundera, Stanislaw Lem, Doris Lessing, Ian McEwan, Naguib Mafouz, Tomas Eloy Martinez, Kenzaburo Oe, Cynthia Ozick, Philip Roth, Muriel Spark, Antonio Tabucchi, John Updike and A. B. Yehoshua: how to decide who, among these luminaries, had contributed most to the art of fiction? While we were debating, we heard that Bellow had died. ‘Live long enough and you’ll receive all the prizes,’ Mavis Gallant once said. We did not want to engage in such Darwinian contests.

Under normal circumstances, readers have no idea how lucky they are to be able to read without comparative constraints, to be able to enjoy a book one day and another book the next without being compelled to measure Mr Pickwick against Mr Micawber, or Emma Bovary against Anna Karenina. No reader in his right mind would bother to discriminate between the ‘achievement in fiction’ made by any two books he has enjoyed, by a single little book like Tristram Shandy for instance, and by the seven hefty volumes of A la recherche du temps perdu. No reader wonders, when taking a book to bed, whether The Tin Soldier is more memorable than The Tin Drum, or whether The Hound of the Baskervilles holds up to Tess of the D’Urbevilles. Blissfully, readers are not accountable to anyone and can merely say ‘This I like’ and ‘This I don’t’, and leave it at that.

We, however, were sitting on a jury and were therefore forced into explaining such preferences. And curiously, in trying to make up plausible arguments, a number of useful considerations began to emerge, shaping themselves into intelligible reasons. What was the import of a book we loved, what was that curious sense of imaginative enlargement that certain pages produced in us, as if the walls of our mind were stretched and rearranged, and windows opened onto unsuspected vistas? Why did some of the books draw our eyes towards intimate, concentrated places that we knew well, while others led us towards much vaster regions, forcing us to consider centuries and worlds instead of present instants and private rooms? How did certain books link our own lives to ageless events, to an ancient memory of stories, while others, more modestly, with more immediacy, explored what we take to be our present condition? ‘What in the world is this emotion?’ asked Rebecca West after reading King Lear. ‘What is the bearing of supremely great works of art on my life that makes me feel so glad?’ Thankfully, our conversations did not end in thunderous conclusions, merely in a sense — a better sense — of what we were looking for, that ‘achievement in fiction’ which had begun to mean, for us, helping us achieve a better learning of the world.

Forced to make a singular choice, every juror (even Paris, perhaps) must feel a little unfair because, to a single exclusive name we prefer a variety, a series of possible choices that allows for changes in mood, in taste, in affinity. No reader considers himself monogamous. This short list of 18 names was, we felt, our true conclusion.

In the end, we chose the Albanian writer Ismail Kadaré. Even though not all of his many books have been translated into English (and, of those, only a few are still available), they are enough to show his brilliance as an epic writer for whom the stories of our past still reflect, as in a slightly blurred mirror, our bloodthirsty present. Kadaré is an explorer of vast areas of human suffering, a writer who recognises, in our myriad conflicts, stories of humour and misery, happiness and treason, evil and greatness, that have changed little since the times of Homer. We come to the end of his books transformed by that which we have witnessed, and with a different knowledge of our time and place. That should suffice.