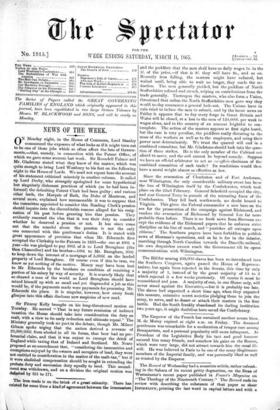 ON Monday night, in the House of Commons, Lord Stanley commenced the exposure of what looks as if it might turn out to be one of those jobs which so often affect the fate of Govern- ments,—that, namely, in connection with the Patent Office, of which we gave some account last week. Sir Roundell Palmer and Mr. Gladstone stated what they knew of the matter, which was quite enough to bring Lord Westbury to his feet on the following night in the House of Lords. We need not repeat here the account of his statement criticized minutely in another column. It called up Lord Derby,-who strangely apologized for some hypothetical but singularly dishonest practices of which (as he had been in- formed) the defaulting Patent Clerk had been guilty ; and various other lords, the Marquis of Bath, the Duke of Montrose, and several more, explained how unreasonable it was to suppose that the committee appointed to consider this Reading Clerk's pension should inquire into the discreditable reasons alleged for his resig- nation of his post before granting him that pension. They evidently resented the idea that it was their duty to consider whether he deserved a pension or not. It has since come out that the scandal about the pension is not the only one connected with this gentleman's duties. It is stated with great appearance of precision that when Mr. Edmunds first accepted the Clerkship to the Patents in 1833—the one at 4001. a year—he was pledged to pay 3001. of it to Lord Brougham (the then Chancellor) and his brother-1001, to Mr. Brougham, 2001. to keep down the interest of a mortgage of 5,0001. on the landed property of Lora Brougham. Of course even if this be true, we know as yet nothing of the motive. Money may have been lent to Mr. Edmunds by the brothers on condition of receiving a portion of his salary by way of security. It is scarcely likely that so shrewd a man of the world as Lord Brougham should have mixed himself up with so small and yet disgraceful a job as this would be, if the payments made were payments for procuring Mr. Edmundi the _place. It is singular, however, how every fresh glimpse into this affair discloses new suspicion of new mud.