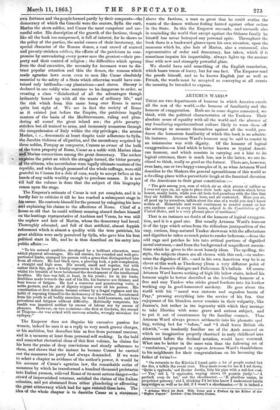 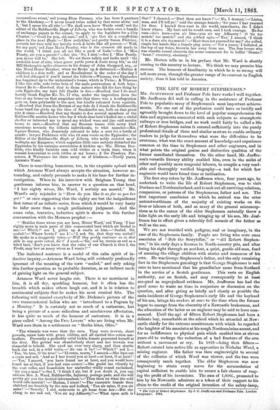 THERE are two departments of humour in which America excels all the rest of the world,—the humour of familiarity and the humour of exaggeration. Both are in some degree connected, we think, with the political characteristics of the Yankees. Their absolute sense of equality with all the world and the absence of any humiliating superincumbent culture likely to warn them off the attempt to measure themselves against all the world, pro- duces the humorous familiarity of which this book is an admira- ble instance. Artemus Ward's humour may be said to consist iii

an internecine war with dignity. Of the humour of logical exaggeration—a kind which is better known as typical Aineri- can humour, and which consists in carrying out a hint to its logical extreines, there is much less, nor is the latter, we are in- clined to think, really so good as the former. There are, however, even here, one or two happy examples of it, as when Artemus Ward describes to the Shakers the general agreeableness of this world as a dwelling-place with a parenthetic laugh at the fanatical devotion of the Americans to their great constitution :—

" The gals among you, sum of which air as slick pieces of canker as I ever sot eyes on, air syin to place their heds agin weskits which kiver honest, manly harts, while you old heds fool yerselves with the idea that they air fulffilin their mishun here, and air contented. Here you air, all pond up by yerselves, talkin about the sins of a world you don't know nothin of. Meanwhile said world continners to resolve round on her own axeltree onct in every 24 hours, subjeck to the Constitution of the United Sates, and is a very plesant place of residence."

That is an instance no doubt of the humour of logical exaggera- tion, and it is a good one. But usually Artemus Ward's humour is of the type which arises from the ridiculous juxtaposition of the easy, curious, limp-natured Yankee showman with the affectations and dignities he takes so much pains to render ludicrous,—from the odd rags and patches he lets into critical portions of dignified moral costumes,—and from the background of magnificent associa- tions which he gives to the most homely ideaa. The spelling, the style, the subjects chosen are all chosen with this end,—to under- mine the dignities of life, —and in his own American way he is as clever at this work as Thackeray (from a very different point of view) in Jeames's dialogue and Policeman X's ballads. Of course Artemus Ward knows nothing of high life below stairs, indeed his humour might be better described as the levelling humour of a free and easy Yankee who sticks grand feathers into his leather working cap In good-humoured mockery. He goes about the world with his " moral wax statoots and sagashus beests of Pray," pressing everything into the service of his fun. Our enjoyment of his blunders ,never consists in their vulgarity, like Jeanies'i, but rather in the ingenuity with which they manage to take liberties with some grave and serious subject, and to put it out of countenance by the familiar contact. Thus Artemus Ward always presses arithmetic into his phonetic spel ling, writing be4 for "before," and "I shall leave British sile 4thwith,"—an insolently familiar use of the Arab numeral on which no imagination properly chastised in early childhood into abasement befere the decimal notation, would have ventured. What can be better in the same vein than the following set of "resolutions," proposed to express Artemus Ward's thankfulness to his neighbours for their congratulations on his becoming the father of twins?-

" On returnin to the Kitchin I found quite a lot of people seated be4 the fire, a talkin the event over. They made room for me & I sot down. 'Quite a eppisode,' sod Doctor Tordin, litin his pipe with a red-hot coal. Yes,' sod 7, '2 eppisodes, waying abowt 18 pounds jintly.'—' A perfeek coop de tat,' Bed the skoolmaster. E pluribus unum, iii proprietor persony,' sod I, thinking I'd let him know I understood furrin langwidges as well as he did; if I wasn't a skootniaster.--' It is indeed a • Artemis Ward, his Book. With Notes and a Preface by the Editor' of the " Bigiow Papers." London: John Camden Hotten. There is something humorous, too, in the exquisite aplomb with which Artemus Ward always accepts the situation, however as- tounding, and calmly proceeds to make it his base for further in- vestigation. When in his interview with Brigham Young that gentleman informs him, in answer to a question on that head, " I hey eighty wives, Mr. Ward, I sertinly am marrid," Mr. Ward's only rejoinder is "How do you like it as far as you hey got ?" at once suggesting that the eighty are but the insignificant

first terms of an infinite series, from which it would be very hasty to infer more than a rough preliminary judgment. And the same calm, tentative, inductive spirit is shown in this further conversation with the Mormon prophet :—

" 'Besides these wives you see here, Mister Ward,' sed Yung, hav eighty more in varis parts of this consecrated land which air Sealed to me.'—' Which ?' sez I, gittin up & starin at him.—' Sealed, Sir, sealed.'—' Whare bowts ?' sez I sod, Sir, that they was sealed !' He spoke in a traggerdy voice.—' 'MI they probly continuer on in that stile to any grate extent, Sir?' I axed.= Sir,' sed he, tarnin as red as a biled beet, don't you know that the rules of our Church is that I, the Profit, may hey as meny wives as I wants ?"

The italicized sentence is a model of this calm spirit of in- ductive inquiry,—Artemus Ward being still evidently profoundly ignorant of the meaning of the term "sealed," and only asking this further question as to probable duration, as an indirect mole of gaining light on the general subject.

Artemus Ward never laughs out. There is no merriment in him, it is all dry, sparkling humour, but it often has the breadth which makes others laugh out, and it is in relation to sentimental subjects that he makes his most comical hits. The following will remind everybody of Mr. Dickens's picture of the two transcendental ladies who are " introduced to a Pogram by a Hominy." It is certainly not so much of a caricature, but being a picture of a more ridiculous and mischievous affectation, it has quite as much of the humour of caricature. It is in a piece called "Among the Free Lovers" who are living when Mr. Ward sees them in a settlement on " Berlin hites, Ohio."

"The wimmin was wins than the men. They wore trowsis, short gownds, straw hate with green r:bbins, and all carried bloo cotton urn- broilers. Presently a perfeckly orful lookin female presented herself at the door. Her gownd was skanderlusly short and her trowsis was shameful to behold. She eyed me over very sharp, and then starlit' back she sed, in a wild voice,—' Ah can it be?'—' Which ?' sod Yes, 'tis troo, 0 'tis troo ! 15 cents, warm," I anserd.—She bust out a cryin and sed, And so I hav found you at larst—at larst, 0 at larst!'

Yes,' I anserd, 'you have found me at larst, and you would have found me at lust, if you had cum sooner.'—She grabd me vilently by the coat collar, and brandishin her umbreller wildly round exclaimed, Air yon a man? '—Sez I, ' I think I air, but if you doubt it you can address Mrs. A. Ward, Baldinsville, Injianny, postage pade, and she will probly giv you the desiied informashun.'—' Then thou ist what the cold world calls marrid?'—' Madam, I latest !'—The exsentric female then clutched me franticly by the arm and hollerd, Yon air mine, 0 you air mine! '—'Scacely,' I sed, endeverin to git loose from her.—But she clung to me and sed, 'Yon air my Affinerty!'—'What upon arth is momentious event,' sed young Ebon Parsuns, who has been 2 quarters to the Akademy.—' I never heard twins called by that name afore,' sed but I spose it's all rite.'—' We shall soon have Wards snuff,' sed the editor of the Baldinsville Bugle of Liberty, who was lookin over a bundle of exchange papers in the corner, 'to apply to the legislator for a City Charter.'—' Good Tor you, old man!' sed 'giv that air a consilickius place in the next Bugle.'—' How redicklus,' Bed pretty Susan Fletcher, coverin her face with her knittin work & larfin like all possest.—` Wall, for my part,' sad Jane Maria Peasley, who is the crossost old made in

you never will be.' She left. We sot there talkin and larfin until the switchin hour of nice, when grave yards yawn & Jests troop 4th,' as old Bill Shakespire aptleo obsarves in his dramy of John Sheppard, esq., or the Moral House Breaker, when we Broke up & disbursed.—Muther & children is a doin well; and as Resolushuns is the order of the day I will feel obleeged if you'll insult the follerin—Whereas, two Eppisodos has happinod up to the undersined's house, which is Twins ; & Whereas I like this stile, sade twins bein of the male perswashun & both boys ; there! Be it—Resolved that to them nabers who did the fare thing by sade Eppisodes my hart felt thanks is doo.—Resolvec4 that I do most hardly thank Engine Ko. No. 17 who, under the impreshun from the hiss at my house on that anspishus nite that thare was a konflagration goin on, kum galyiantly to the spots but kindly refraned from squirtin. Resolved; that frum the Bottum of my Sole do I thank the Baldinsville brass band fur givin np the idea of Sarahnadin me, both on that great nite & sine.—Resolved, that my thanks is doe several members of the Baldinsville meetin house who fur 3 whole dasehain't kalled me a sinful skoffer or intreeted me to mend my wicked wase and jine said meetin house to onct.—Resolved, that my Boozum teams with meny kind emoshuns towards the follerin individoonls, to whit namolee—Mis. Square Baxter, who Jenernsly refoozed to take a sent for a bottle of camfir ; lawyer Perkinses wife who nit sum versis on the Eppisodes ; the Editor of the Baldinsville Bugle of Liberty, who nobly assisted me in wollupin my Kangeroo, 'which sagashus little cuss seriusly disturbed the Eppisodos by his outrajus acreetchins & kickins up ; Mis. Hiram Doo- little, who kindly furnisht sum cold vittles at a tryin time, when it wasunt konvenient to cook vittles at my house; & the Peasleys, Par- anuses, & Watsunses fur there many ax of kindness.—Trooly yures, Arnmstus Wenn." that?' I shouted.—'Doit thou not know ?'—' No, I dosthnt.'—' Listen, man, and I'll• tell ye ! ' said the strange female ; 'for years I hay yearned for thee. I knowd thou west in the world, sumwhares, tho I didn't know whare. My hart sed he would cum, and I took courage. He has cum—he's here—you air him—you air my Affinerty ! 0 'tis too

mulch! too mutch!' and she sobbed agin.—' Yes,' I anserd, think it is a darn site too match !'—' Haat thou not yearned for me?' she yelled, ringin her hands like a female play actor.—' Not a yearn,' I bellered, at the top of my voice, throwin her away from me. The free lovers who was standin round observin the scene comment for to holler Shame !' beast !' etsettery, etsettery."

Mr. Hotten tells us in his preface that Mr. Ward is shortly coming to this country to lecture. We think we may promise him success. The humour of familiarity in which he is so strong will tell more even, through the greater range of its contrast to English society, than it has told in America.